The majority of today’s handguns are based on either the Browning tilting barrel design or a straight blowback concept. The phrase “there’s nothing new under the sun” applies to almost every handgun that’s come out in the last century. The only things that change: what the gun’s made of and how the trigger works. Whatever else you can say about the Desert Eagle, it’s different. It uses a more modern operating system on a much different scale. 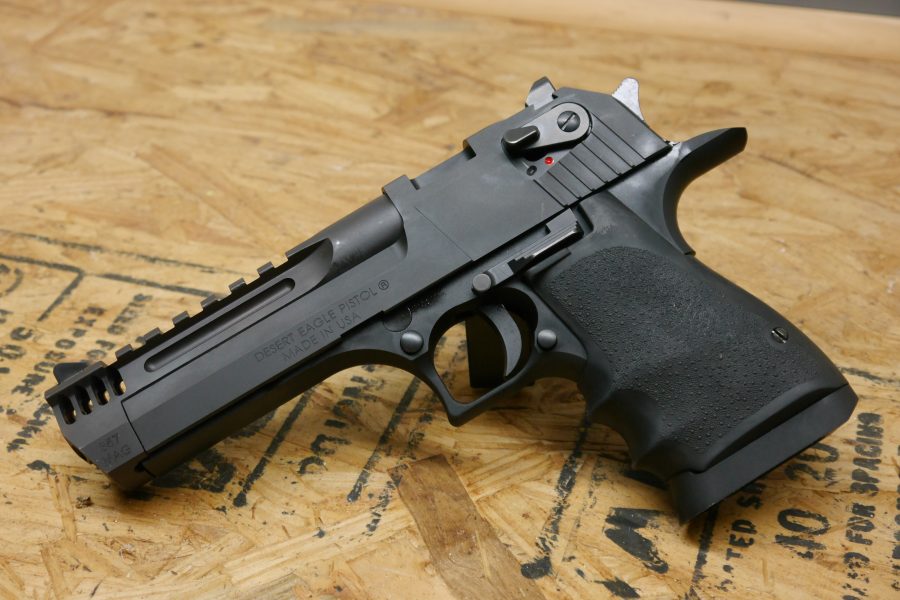 The Desert Eagle’s barrel is fixed in place (just like in a direct blowback design). To handle the higher pressure loads and relatively thinner case walls (proportional to the powder charge) in large caliber rounds, the gun needs to let the chamber pressure drop off significantly before any attempt to extract the cartridge. Otherwise the case could rupture and injure the shooter. That’s normally where the short-stroke tilting bolt design would come in. But even that’s insufficient for the mighty .50 AE cartridge.

To wait a little longer in the firing cycle to extract the cartridge and use as little force as possible, the Deagle’s designers went with a short stroke piston system, similar to the one found in the M1 Carbine or Mossberg 930 shotgun. For the locking mechanism to keep it all contained, the designers chose a modified version of the AR-15 bolt design, with multiple teeth to fully support the case head and better contain the raging fires within.

This system solves all the technical problems with a semi-automatic handgun chambered for insane calibers and enrages database architects around the world, who have to create a new category for gas-operated rotating bolt handguns…just to accommodate this singular firearm.

The original Desert Eagle was designed by Magnum Research, Inc. Israel’s IMI produced the pistol until about 2009 when production moved in-house at MRI’s Minnesota based shop. In 2010 Kahr purchased Magnum Research Inc and made a couple changes to the original design, which is the version we’re testing here today.

Notably different on this version: factory-installed Hogue grips and a cut in the slide that brings the gun’s total weight down and makes it New York state compliant. The majority of the pistol, though, is the same old gun we’ve come to know and love. Or hate, given problems with its reliability and the ginormous concussion created by the .50 AE cartridge. Or rely on heavily in Call of Duty, because guns. 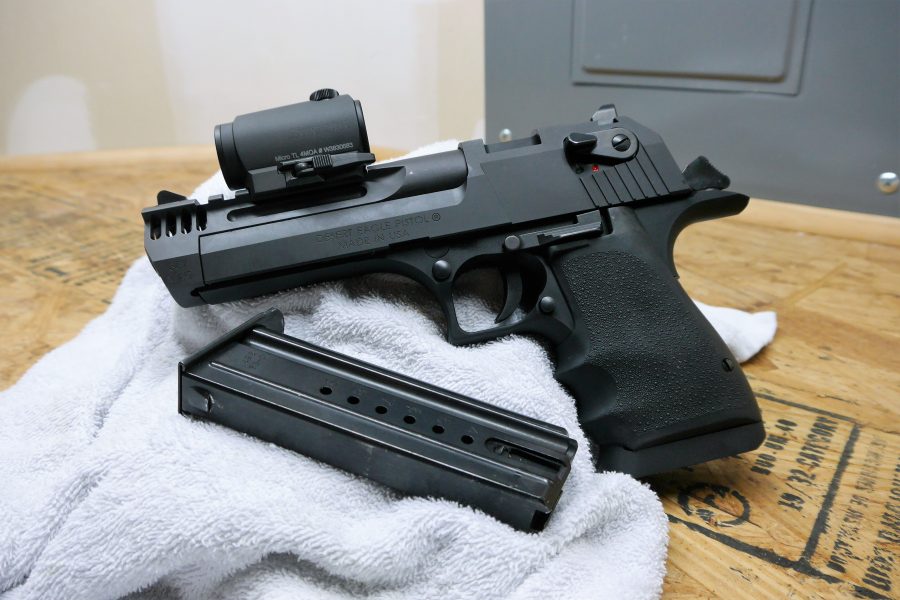 Another change: a Picatinny rail now sits at the top of the barrel. That seems like a smart move. Since the barrel itself is fixed, you can remove and replace it without shifting the accuracy or point of impact. This seems like a smart move, and something the Desert Eagle can hold over guns like an M&P C.O.R.E. or the new GLOCK MOS models (which use cutouts in the moving slide). As I said, it seems like a smart move. When you start putting rounds downrange the barrel heats up quicker than Jeremy Clarkson’s temper. Depending on the brand of red dot you throw on top, this can either be an inconvenience or a big problem. The heat generated from the barrel is all directly channeled up into the optic.

I used an Aimpoint red dot and it ran like a Swiss clock through 500 rounds of .357 Magnum ammo in under an hour on the range. But was hotter than INSERT SUPERMODEL HERE when I went to turn it off. Less durable optics may melt under similar conditions, putting an unexpected crimp in your range day. 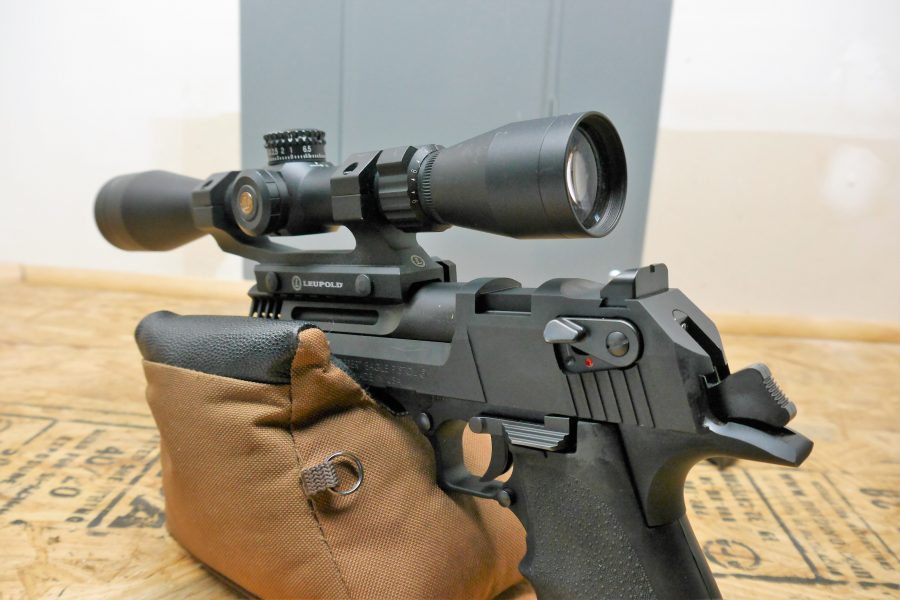 The Picatinny rail opens up all kinds of options for those who are so inclined. And those with nothing better to do on a Saturday afternoon. 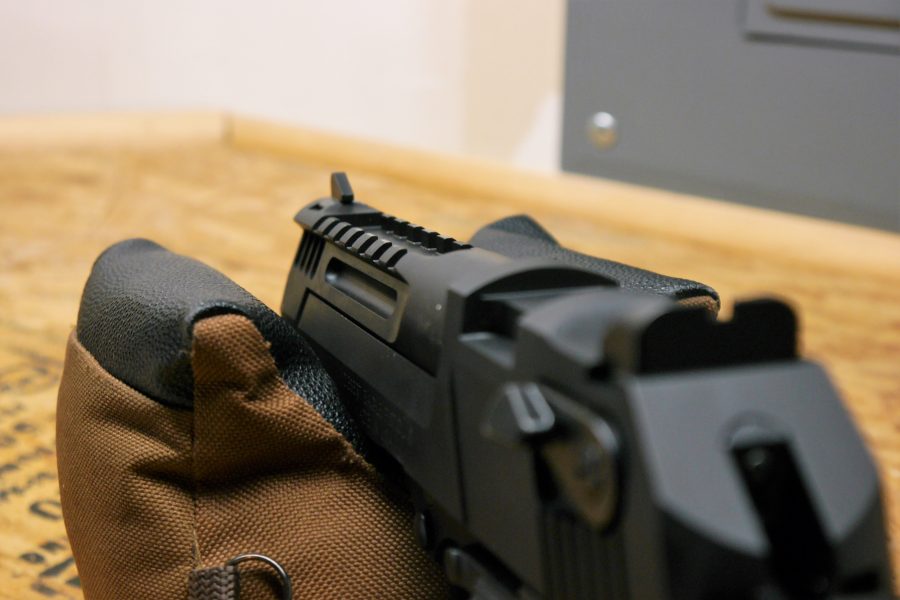 If your optic melts, you still have a fine set of iron sights to back it up. The sights are crisp and easy to pick up, capable of being drifted for windage adjustments. If your model is anything like mine, that won’t be necessary; the sights were dead nuts accurate straight out of the box.

The impact is as predictable as Robert substituting the phrase “bangswitch” for the word “trigger” somewhere in this review. Due to the gargantuan size of this hand cannon, the slide-mounted safety is nearly impossible to reach for the average human hand. I can operate it with some effort, but those with smaller paws like our man Zimmerman can’t even tickle the selector switch, let alone manhandle it into place.

This limits the firearm’s usefulness. Imagine trying to use this thing in a home defense scenario, having your sights on an evil doer, unable to use your gun because your hands are too small to operate the safety. The Deagle’s firing cycle projects a lot of energy downrange during the firing cycle. In a Newtonian manner, that energy is also transmitted to the shooter’s hand. All that energy transferred over such a short surface area would be downright insane in the Desert Eagle without the exaggerated beavertail — larger and wider than anything else I’ve fired. Much appreciated.

Less appreciated: the machining around the trigger. The trigger itself is a fine piece of engineering with a crisp clean break and short enough reset. But the area surrounding the bangswitch seems crudely designed.

On the Browning 1911 design, there’s a cutout specifically to allow your trigger finger to rest comfortably against the trigger without the frame impinging on your finger. The Desert Eagle shows no such consideration of your flesh. It presents a sharply machined edge which rubs against your trigger finger with each trigger pull. Instead of a standard flat muzzle, the Deagle sports a proper muzzle brake machined into the barrel itself (shown here detached from the gun but placed roughly in the right spot for emphasis). Given the caliber of ammunition used in these firearms that’s a welcome feature. It reduces felt recoil and making the shooting experience a little more comfortable.

For the shooter, that is. When using cheaper ammo the muzzle brake has a tendency to throw football-sized fireballs to the sides. The concussive force of the blast can cause the shooting lanes to either side of you to empty rapidly. A feature, not a bug? We report, you decide.

Any kind of under-barrel Picatinny mount is notable by its absence. Normally, that would be useful for hanging accessories like lights and lasers, options which would improve the firearm’s utility in low -light and home defense scenarios. The Deagle’s outside is is impressive looking; the internals and the engineering that went into this beast are a real show stopper. Takedown is a snap. Push a single button and rotate a takedown lever to disassemble the gun for cleaning or maintenance.

Instead of a single massive recoil spring, the Desert Eagle splits the load between two identical springs working in tandem, a design feature which makes the assembly much flatter and ultimately takes up less space. The slide is a work of art, machined from a solid piece of metal and chunky enough to beat a dwarf to death if so needed. 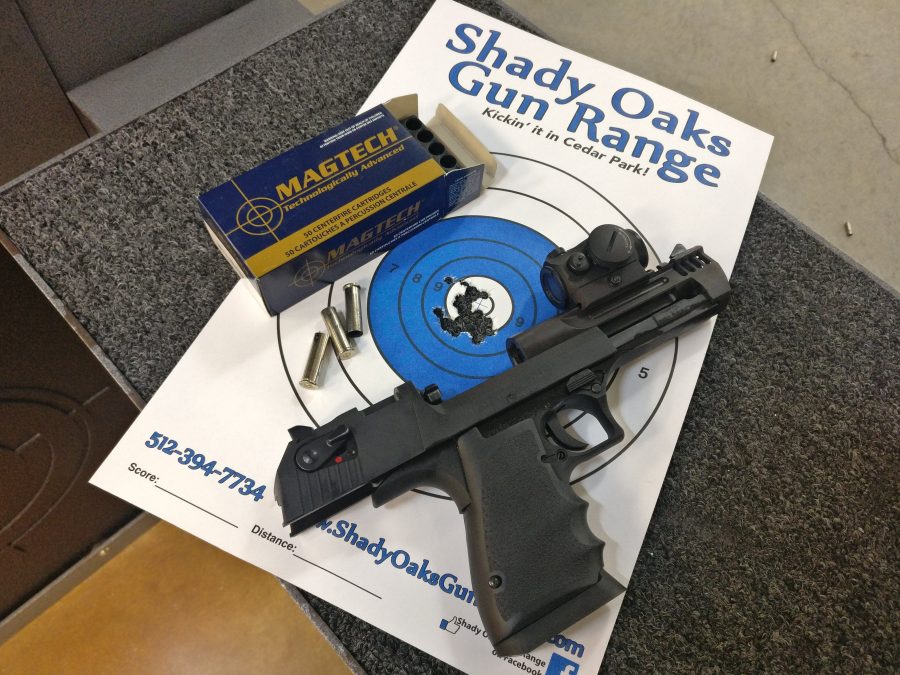 This gun — chambered in .357 — shines on the range. I’ve launched the cartridge from multiple handguns, from a Smith & Wesson Airweight J-Frame revolver to a Colt Python. This is the lightest-recoiling version of a .357 Mag handgun I’ve ever fired. Shooting this .357 Magnum is no worse than pulling the trigger on a GLOCK 19.

The length of time that the gun is in recoil makes this gun such a soft shooter. On a revolver, all that rearward impulse is delivered to your hand as fast as the gunpowder can burn. On a semi-auto like this one, some of the force is delivered immediately through the frame, but a good chunk is used to cycle the action. The force is soaked up by the recoil springs, delivered over a longer period of time. Robert sent this very gun back to the factory because of feeding problems. After a trip to and from Kahr, he handed it off to me for a second crack at it. I used the same ammunition he did. The gun refused to go into battery (see previous picture with me holding the gun in my hands; the slide is slightly out of battery after firing a round).

TTAG’s publisher used older lead nose rounds, which provided just enough resistance while chambering to keep the massive slide from reliably going fully back into battery. When I switched to full metal jacket or jacketed hollow point rounds the problem disappeared. Moral of the story: always test your home defense ammo to make sure it works with your gun. 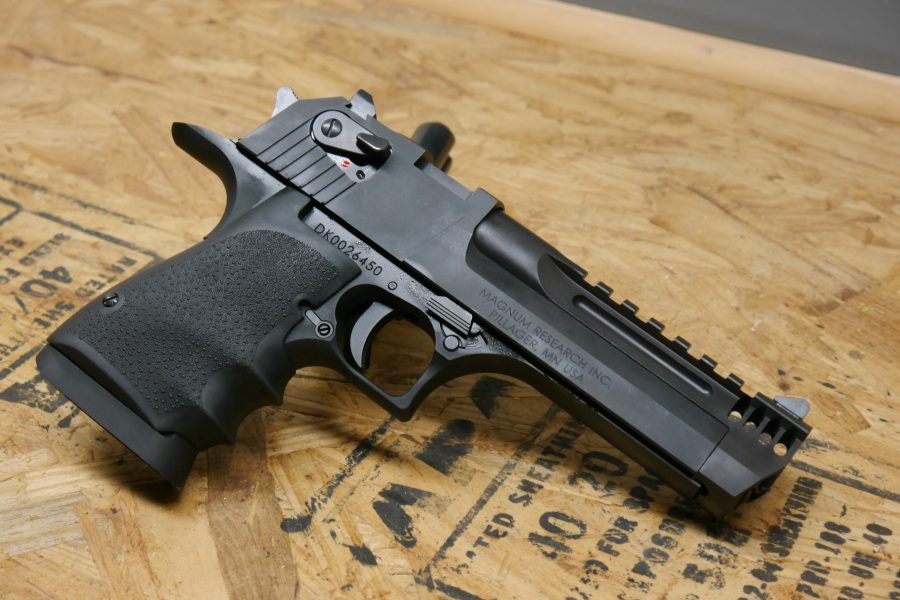 The Desert Eagle isn’t one one gun to rule them all. It’s too big to be very useful in many situations. The controls can be hard to reach, and it can be picky about ammo. But this is an amazing piece of engineering art, solving ballistic problems in an elegant yet brutal manner.

I’d never carry a Desert Eagle into combat. And I wouldn’t take one hunting. I’d never keep one on the nightstand. But I could definitely see myself keeping one in the safe for when my Yankee friends come into town and want to go shoot some big guns.

Style * * * * *
The Italian Futurists of the early 20th century would absolutely love this thing. It looks massive and violent even while sitting on the shelf.

Concealability (0)
I’m sorry, you want to do what?

Customize This * * *
There’s a Picatinny rail on the top for red dots and other optics, and the design has been around enough that some replacement parts are available. But there’s no under-barrel Pic rail and the aftermarket scene isn’t exactly in AR-15 territory.

Ergonomics *
Aye, there’s the rub. The safety is nigh on impossible to reach for the average (non-Trump) shooter. It’s all you can do to wrap your hand around the grip without the largest, meatiest paws.

Accuracy * * * *
Not quite as accurate as a .357 Magnum revolver, but with a red dot installed it did just fine finding the 10-ring.

Reliability * * *
Ammunition is key here. You need to find what your Deagle likes best and restrict its diet to only that flavor. Full metal jacket in the case of this one. Your mileage may vary.

Overall * * *
I really can’t fault anyone for buying one of these. The Desert Eagle is a range toy hall-of-famer and solidifies your “cool kid on the firing line” status. But you can either have this ridiculous piece of engineering (and I mean that with all due love and respect) or an upmarket 1911 guaranteed to eat damn near everything, conceal easily and fire more accurately. Your call.