A while ago I decided to get out of the .45 game. Why, you ask? The short answer is it was getting too expensive to shoot. The long answer lies in modern ammunition technology, but that’s a different article. One morning my lovely wife got tired of my bitching and said, “Why don’t you get that 9mm you’ve been talking about?” The gun in question was the CZ 75 P-07 Duty, a polymer version of the ergonomically delicious CZ-75. With the .45s on the chopping block and the 9mm stepping up to the plate, I was hoping for czechmate.

First thing anyone notices about the P-07 is it has a rather unique look. You either hate it or love it. I’m decidedly in the latter camp. I like its futuristic, aggressive looks. Its uniqueness sets it apart from the droves of Glocks, XDs and M&Ps I encounter every day.

Ergonomically, CZs have always clicked for me. Something about the grip angle and perfect amount of hump make them feel really comfortable in my hands. The P-07 is no exception. Coupled with the aggressive all around stippling, this gun is in no danger of slipping out due to sweat, rain or any other types of slippery substances your average shooter may encounter. CZ incorporated their new Omega trigger system in the P-07 which leads to fewer parts and in turn they claim a better trigger pull. I didn’t have any older CZs on hand to test the difference, but in dry firing I did find the trigger to be quite smooth in double action. Single action was nice and crisp, but the reset was a little longer than I’d like. Despite the longer reset, the trigger on this CZ was easily better than the HKs or SIGs I’ve been shooting lately.

The other benefit of the Omega trigger is the ability to switch the P-07 from the standard issue decocker to a safety for those who like to carry condition 1. I prefer the decocker, so I didn’t attempt the old safety switcheroo, but according to this video, it’s no big deal. Concealing this gun is easier than outsmarting Larry the Cableguy. It’s almost the exact same size as a Glock 19, which means it’s the perfect compromise between duty pistol and subcompact. Despite the rising heat here, I had no problem hiding the CZ underneath a variety of clothing while utilizing both IWB and OWB holsters. 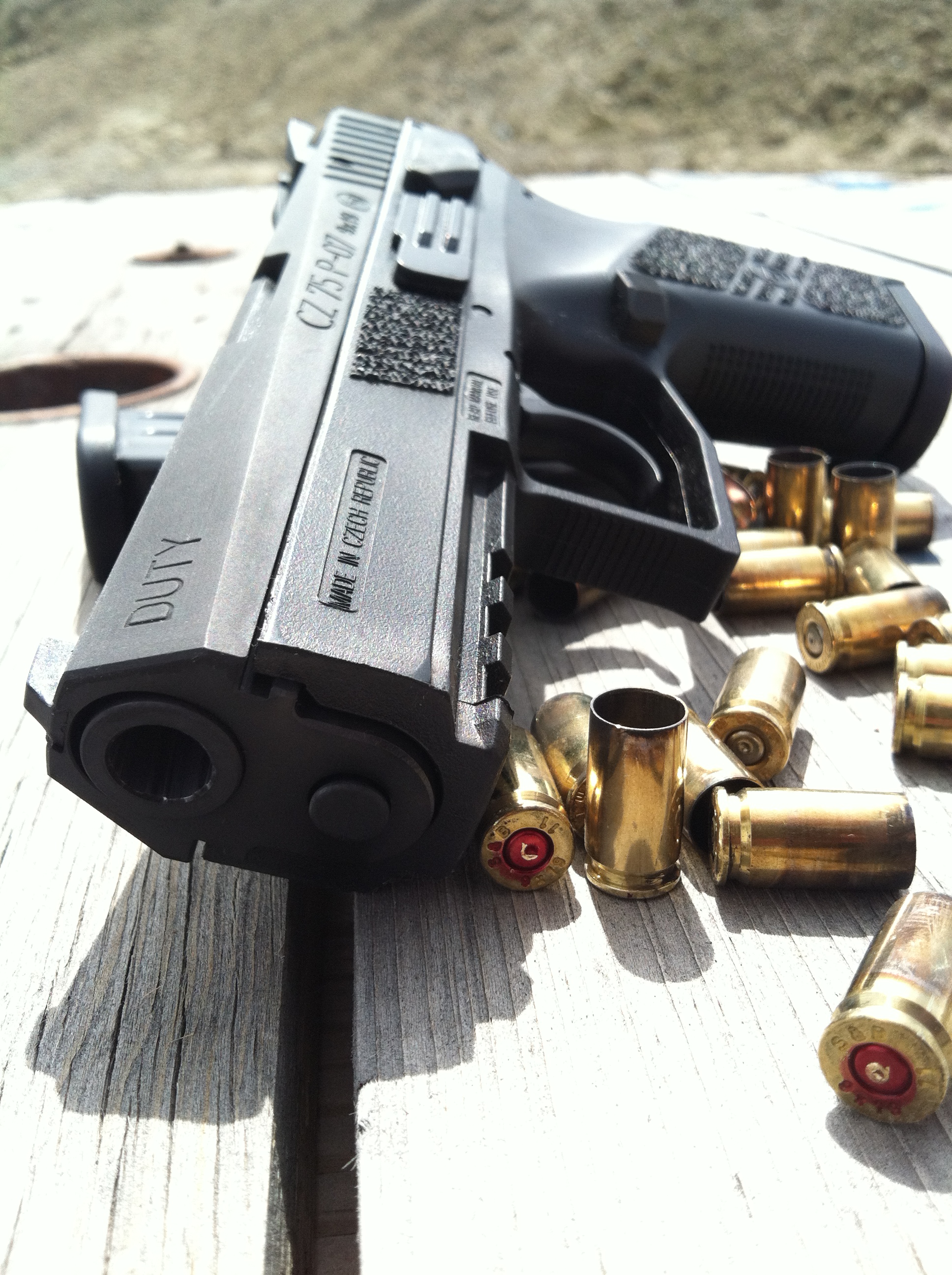 So how does it shoot? Thanks to CZ’s unique design, beautifully. Because the slide rides inside of the frame instead of on top like most designs, it results in very little slide mass and a low bore axis. As you can see in the video, recoil is minimal at best.

The Glock style sights lend themselves to pretty good combat accuracy, but I would prefer night sights that weren’t made of plastic. Unfortunately, due to the lack of aftermarket support, replacement sights are few and far between for this gun. Despite my qualms about the sights, accuracy out of the box was great. Right away I ran 10 rounds slow fire and was able to achieve good groupings without much effort. I then loaded up 8 and ran committed pairs as fast as I could, again with great results. Picking up this gun and shooting it was easy and intuitive, like any gun you use for self defense should be. Over the course of a little over a month I ran a thousand rounds of Hornady, Federal, Winchester, Blazer, Speer and TulAmmo through this gun. I didn’t clean it, I took it on an ATV trip where it took a tumble in the dirt and generally treated it with a level of respect I usually reserve for the cast of the Jersey Shore. Much like the Honey Badger, the CZ didn’t care. The only malfunctions were two hard primers from the 115 gr TulAmmo and these were easily rectified by stroking the trigger and hitting the primer again. I went into this test really liking CZs, but came out the other end in love with the P-07 duty. Its ergos, size, capacity, reliability and accuracy have granted this Czech import a permanent place on my hip, much to the chagrin of the German and Austrian guns in my house. Like the Caracal, this oft overlooked firearm is definitely a diamond in the rough.

Ergonomics * * * * *
Grip angle, weight, balance and stippling come together in a symphony of comfort for my hand

Reliability * * * * *
Blew through a thousand rounds with no cleaning

Customizable *
The P07 is, sadly, lacking in this category. I found a whopping two different sight options for it and that’s it.

Unless you tuck your t-shirt into your Wranglers, you shouldn’t have any problem concealing this gun

The only thing holding this gun back from a five star rating is the lack of aftermarket parts. Despite that, this gun is well worth it.