My search for quality, affordable self-defense handguns for the budget-minded shooter continues. This time, my quest lead me to the BUL Cherokee, a full-size 9mm Parabellum/Luger semi-auto pistol assembled in Israel.

I’m a fan of Israeli weapons. I figure a country that’s been surrounded by enemies bent on its destruction since its founding ought to know a thing or two about building small arms. I’m also a huge fan of the venerable, reliable CZ-75 design.

I remember the first time I fired a CZ-75 variant. A buddy in college had purchased a Magnum Research Baby Eagle 9mm (another Israeli CZ-75-based pistol). Despite decades-long admiration, I never owned a CZ-75. Until recently. The CZ-75 design is almost as ubiquitous as the John Moses Browning’s 1911 (I said almost). Besides the original Czech CZ — imported into the U.S. by CZ-USA — there’s the Italian Tanfoglio, the IWI Jericho 941 (formerly imported by Magnum Research as the Baby Eagle, and before that imported as… the Jericho 941… my head hurts), Canik of Turkey’s Tristar clones, and the high-end Swiss Sphinx. Armalite got in on the CZ-75 game for a while with the AR24.

About a year ago, I acquired a well-used full size polymer-framed BUL Cherokee manufactured by BUL Transmark in Tel Aviv. I should say, a Tanfoglio/EAA Witness clone (a clone of a clone?). The handgun looks so much like an older-style polymer framed Witness, I suspect BUL contracted with Tanfoglio to manufacture the Cherokee’s frames (and slides?). Anyway, my Cherokee’s not winning any beauty contests.

At some point in its life, the slide, sights and some of the controls were refinished in OD green, and some of that has chipped away. I got two magazines with the pistol, one factory 16-rounder and one aftermarket (manufacturer unknown) 15-rounder. I changed out the butter-soft, worn recoil spring for a new Wolff spring. It’s fitted with 3-dot combat sights. The Novak-style snag-free rear sight was probably drift adjustable at one point; due to the aftermarket finish over top of it, is probably set for good. The fixed front sight is permanently milled out of the slide, with a white-painted dot. 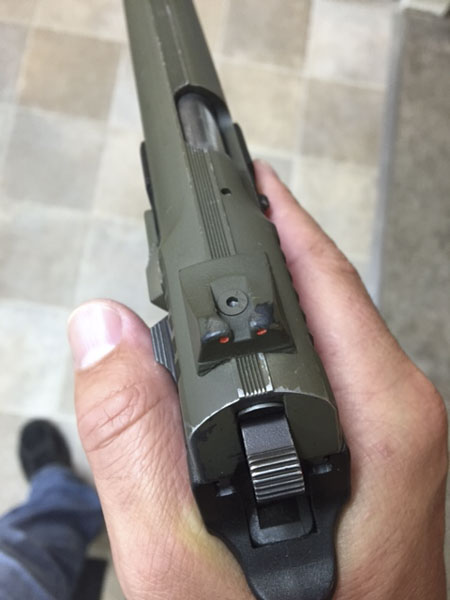 The grip frame is lightly checkered on the front and back straps, while the side panels have mixed cobblestone and checkered texture. It’s certainly not as aggressively grippy as a skateboard-taped GLOCK, and my sweaty mitts wouldn’t mind seeing a little more grippy checkering on the Cherokee. The frame sports a beavertail, which protects my fat hand from hammer bite.

I’ve been shooting long enough that I won’t abide a poor trigger. I’ve sent new, otherwise well-built guns down the road because of crappy bangswitches that I can’t remedy myself (FNS, I’m looking at you).

The Cherokee has a very smooth, non-stagey double action trigger pull. I couldn’t measure the DA pull weight; it maxed out my scale before it broke (the DA trigger pull is a non-issue for me, but more about that later). The single action trigger breaks at just under 4½ pounds, with a bit of creep.

The SA trigger is good enough that, the first time I fired the gun, I had no trouble spinning my MGM Targets Spinner over center at 20 yards without a miss. That requires some marksmanship, smooth transitioning and a gun with a decent trigger.  I can’t usually spin the Spinner right away with an unfamiliar gun (I’m looking at you again, FNS).

And when I press down on the Cherokee’s barrel hood with the slide in battery, there is absolutely no movement. This is another test I conduct on all semi-auto pistols to determine how well the slide is fitted to the barrel, which can be a pretty good indicator of accuracy. The CZ-75 design is unique; the slide rides inside the frame rails. That allows for a low bore axis, which in turn means less muzzle flip.

On the downside, because the slide sits down inside the frame so much, there’s less area to grasp and operate the slide. Those who use the hand-over slide racking technique take note: you need to practice with the Cherokee.

Some maintain that the slide-inside-frame-rails design keeps dirt and debris out of the gun better than the traditional setup, thereby increasing reliability in adverse conditions. There has been some recent anecdotal evidence of this on the Military Arms Channel’s YouTube video testing of the CZ P07.

My Cherokee is apparently of 2000-2005 manufacture; it lacks the dustcover, Picatinny rail and finger grooved grip post 2005 manufactured Cherokees possess. Thanks to short, fat fingers, I’ve always struggled with high-capacity, double action/single action pistols. Most grips are too big for adequate control and I struggle reaching the trigger for that first double-action pull.  Not so with the Cherokee.

This is the best-fitting high-capacity 9mm pistol I’ve ever held. And I say that as a dude with a serious man-crush on the Springfield Armory XD, and who has learned to tolerate GLOCKs, especially after a little custom grip work. BUL managed to make a 16-round polymer grip slim and trim, like it was made for me.

The first double action shot is still a stretch, but only if I choose to carry the gun in DA/SA mode. One of the of real advantages of the CZ-75 design is that it can be carried either DA/SA — hammer down on a loaded chamber, first shot is fired double action, subsequent shots fired single action . . .

or in Condition One like a 1911 — chamber loaded, hammer cocked, thumb safety engaged, all shots fired single action once safety disengaged).

Since I don’t carry or fire the gun double action, problem solved. I carry the Cherokee cocked and locked, as God intended a pistol to be carried.

For my first time on the firing line with the Cherokee, I filled a magazine with 115 grain FMJ reloads and stepped out in front of my MGM Spinner. At 20 yards, I didn’t miss a shot. Talk about a “natural shooting pistol” . . .

For accuracy testing, I fired seven different loads in the Cherokee, from range fodder to self-defense loads. I shot them seated, gun resting on a sandbag, at exactly 25 yards. A sixth round was loaded in each magazine, to keep consistent pressure on the bottom of the barrel from the magazine for each 5-round string of fire (if you believe such things make a difference). Each load is listed below with the corresponding picture.

Note the shot directly above the circled 5-shot group was a sixth shot fired — out of frustration. Hence, I didn’t include it in the original five-shot group. The flyer was the second shot in the string, and wasn’t caused by a discernible shooter error.

Discounting the flyer and including the sixth shot, these handloads put up a pretty decent five-shot group, hovering around two inches at 25 yards. HOWEVER, I still can’t account for the flyer.

The Cherokee isn’t going to win any accuracy contests. Granted, this gun was well used when I bought it; I have no idea how many rounds it’s fired or how or even if it was maintained. Given a little more time for load development, maybe I could improve the results. It’s certainly minute of bad guy.

Those big, coarse, worn sights are biggest hindrance to accurate slow fire. All the edges and corners on the front and rear sights are worn smooth and rounded. The front sight is too thick and coarse for accurate slow fire, and unfortunately it’s integrally machined out of the slide, so it can’t easily be replaced (although it could be filed narrower…hmm).

The Cherokee was perfectly reliable. I put as many different kinds of 9mm ammo through it as I had on hand, several hundred rounds’ worth, without incident.

I even tried about 50 rounds of 115 grain FMJ reloads whose cases weren’t properly sized, creating a slight bulge in the bottom of the case. These bum loads refuse to chamber in several of my other 9mm pistols. They chambered and functioned perfectly in the Cherokee. It appears BUL designed the Cherokee with a generous chamber to handle whatever varied ammunition it might come across on the battlefield.

Cherokee pistols are getting hard to find in the U.S. When they can be found on the used market, they’re a helluva buy. New Cherokees sold in the $350 to $420 range, depending on the retailer. I’ve seen used examples for sale for under $200. It’s no wonder the supply’s dried up.

The Cherokee gives its owner a lot of proven CZ-75 goodness for not a lot of coin. Here’s hoping BUL finds an importer again. I’d love to test out a new model Cherokee. (Note: the readily available EAA Witness P (polymer) line is a near-exact facsimile of the Cherokee.) If it’s as reliable and ergonomically sound as its predecessor, it’s bound to be a hell of a gun.

Accuracy: * * 1/2
A little disappointing, but I mostly blame the large, worn sights on my used pistol. A few loads showed some promise and put up roughly two-inch groups at 25 yards, which isn’t half bad. Overall, no better than what I would consider combat accuracy.

Ergonomics: * * * * *
Like it was made for me. I don’t accidentally engage the slide stop with my thumbs-up shooting grip, and the thumb safety is in the right place to be easily swept off. With its CZ-75 lineage, the slide rides low so there’s not as much real estate to grasp and rack. No big deal with a little practice.

Trigger:  * * * 1/2
Double action is long, as with most DA/SA pistols, but it isn’t rough or stagey. Single action breaks cleanly at just under 4 ½ pounds, but there’s noticeable creep before it does so.

Reliability: * * * * *
This Cherokee digested everything I can throw at it, including some improperly sized handloads that makes my other 9mms choke.

Customize This: *
No rails, no replaceable grip panels, no aftermarket sights and no sign of replacement parts this side of the Straits of Gibraltar. There may be some part interchangeability with the Tanfoglio/EAA Witness, but no promises. If you’re looking for something to put your signature on, this isn’t it. CZ-75 holsters aren’t too tough to find. A BLACKHAWK! Serpa for a SIG229 works just fine in a pinch.

Overall: * * * 1/2
BUL designed the Cherokee to function in all conditions with all types of ammo. That it does. Although it’s no tack driver, it’s a well-built, reliable pistol that doesn’t cost much coin.