A properly built AR-15-style rifle can be built to suit a wide range of tasks, from hunting to plinking to self-defense. With just a few tools, a little money and YouTube, an enthusiast can assemble their very own bespoke Modern Sporting Rifle. In fact, a lot of companies selling complete ARs do the same thing (minus the YouTube time). San Antonio’s Sons of Liberty Gun Works is one of them. That’s a good thing, not a bad thing . . .

The gun tested here is the Sons of Liberty Gun Works’ M4-SML. It’s one of their most basic and most popular firearms, MSRP’ing for $1575. Given that this is a “parts gun,” TTAG readers who roll their own (and may roll their eyes) — and those who want a rifle that’s ready-to-go straight out of the box — probably want to know exactly what they get for their money. If so, skip to the detailed specifications below.

There are two main reasons to buy a Sons of Liberty Gun Works M4-SML, rather than building something similar/identical in your garage. First, buying the complete gun saves you time (which equals money). Second, it saves you from making mistakes during assembly (which equals frustration).

While you may argue with some of the choices below, Sons of Liberty chooses these parts based on thousands of hours of testing and decades of gun building experience. They inspect and assemble precision parts with precision, test them separately, test them together, stick the rifle in a box and send it to gun stores. The main advantage is the one that Sons of Liberty sets as its goal: reliability. 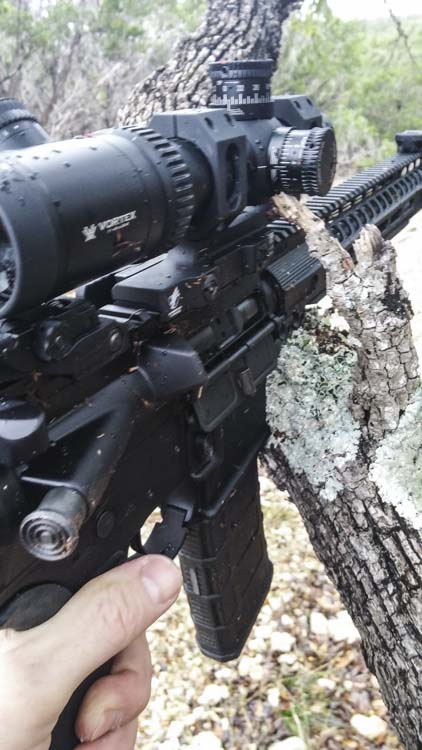 This is not my first Sons of Liberty rifle testing rodeo. I’ve fired thousands of rounds through one of their full auto SBRs (short-barred rifle) without any maintenance (the rifle that is). In all, the gun ate some 14k rounds without a sniff of Hoppe’s. (It’s Frog-Lubed up regularly, but that’s it.) No malfunctions. That’s far beyond a mil-spec AR’s normal service life.

To achieve that kind of reliability, Sons of Liberty turn their back on DIY AR gizmos and gimmicks, focusing on relatively simple parts that deliver optimal function over a long time period. They strive to anticipate the common points of failure under extreme conditions and preemptively reinforce those components to push beyond normal service life. How well? “Sons of Liberty Gun Works will stand behind this weapon and repair any defects free of charge so long as the Barrel, Receivers, Bolt Carrier Group and Buffer system remain in the original configuration.” Our test gun came with flip-up iron sights and a Vortex Viper 1-4 power scope. Oddly enough, I have this scope on a couple of my guns and think highly of the entire line. The gun is basic. There’s no ambidextrous magazine release, bolt release or off set sights. No barrel fluting or special paint scheme. The M4-SML has the look and feel of my Army-issue M4, with a different hand guard and a much, much better trigger.

[Note: the M4-SML is a direct impingement rifle, which I do not prefer. In fact, I’ll never buy anything other than a piston driven AR, as long as the caliber allows it. But that has nothing to do with the rifle’s performance.]

Although this M4-SML is basic, it reminds me of how much I like the basics, and how great basic really is when someone gets it right. The 16″ version balanced well and easy, quick to swing and stop. The hand guard diameter is fairly small — I can wrap my hand all the way around it and touch my ring finger to my thumb — but it flairs out at the end to accommodate the Keymod rails. That balance makes a 16″ barrel gun swing like a 14″. I put a total of 560 rounds through the M4-SML. The first 500 were straight through. I lubed up the gun before I fired it, spraying the bolt, breach and barrel with RemOil, and started shooting. Using PMags, a few different steel magazines and a Surfire 60-round magazine, I poured rounds out of this thing.

I shot mostly kneeling and walking, but I also recreated a few of my TIC (Troops in Contact) ballistic experiences, shooting off the hood of my truck and shooting under my truck with the receiver flat on the ground. I shot the M4-SML in the dirt, between brush, got it dirty, and got it wet. I had zero malfunctions of any kind with any round in any magazine in any position. During my entire test cycle, I never cleaned the gun or lubed the M4-SML up again. No issues at all.

But what about accuracy? I tested the 55gr, 62 grain, and 64 grain rounds, firing 60 rounds total for accuracy off of bags at 100 yards. The results were boringly consistent. Nothing shot better than 1″ five shot groups, but nothing shot worse than 1.1″ either. To be clear, I shot these a day after the reliability test, without lubing or cleaning the gun in any way. MOA groups with zero cleaning at this stage is very, very good. Most people building their own AR from scratch aren’t going to get these results. Sons of Liberty makes it happen by paying attention to the little stuff, and knowing what they are doing. I’d trust this or any other Sons of Liberty rifle with my life, any day of the week. It shoots reliably, and it’s accurate well out past the round’s realistic performance range. If you want a basic AR that runs right, without gimmicks and hype, the M4-SML is an excellent choice

Appearance * * *
This is a basic, no frills forged AR. It doesn’t try to be anything else. Looks are highly subjective, and for a higher rating it would need something different aesthetically. As it is, it is dead on average.

Accuracy * * * *
An MOA gun is great and it’s hard to reliably get better than that. A few companies do it, usually at a higher cost with a heavier gun.

Customization * * * * *
It’s an AR with no specialized parts. You can change everything on this gun and change it back 10 times by yourself. But beyond maybe adding a silencer, and changing the stock and grip to something different if you prefer (I don’t), I’d leave this gun alone.