When I first got the Vortex Fury HD 5000 rangefinding binoculars to review, I envisioned focusing on hunting trips. But then I enrolled in a precision rifle course at Government Training Institute – Legion that had me shooting at distances longer than I’d ever shot from before. As you’ll see, all of the tests of these binoculars  – the ranging estimates around my house, a visit to my local gun club for firearm reviews, two trips into the Georgia woods after whitetails and finally the two-day GTI – Legion shooting course – added their own unique challenges for the Vortex Fury.

However, before I describe the field tests let’s run through some of the features of the Fury.

Though an extremely useful piece of useful technology for hunters and shooters, laser rangefinding binoculars are generally fairly simple to use. The center focus knob has a well-knurled surface. The knob’s mechanism is easy to adjust, but ‘stiff’ enough to resist accidental readjustment from the user brushing up against other objects, or shoving the Fury into their backpack. 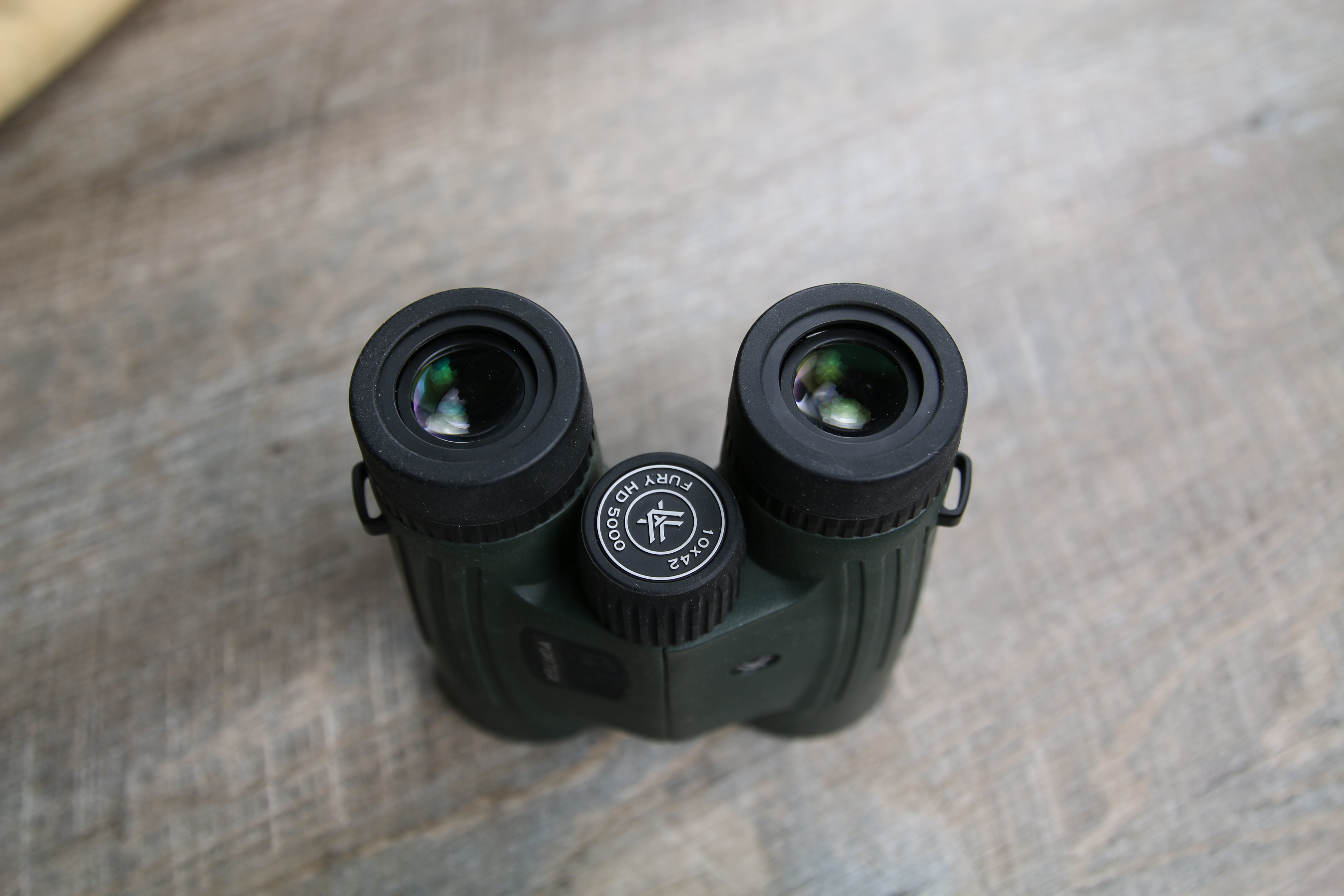 Once these adjustments have been set, there’s no need to readjust unless, like me, you sometimes hunt with your glasses on and other times with them off. It is also extremely easy to replace the battery. It’s located in the compartment below the silver lid on the underside of the Fury.

The final parts needed to use the Vortex Fury HD 5000 Laser Rangefinding Binoculars are the two control buttons located on the upper side. The Vortex Fury can be used solely as a binocular, but pressing and releasing the ‘Measure’ button activates the rangefinding component.

The ‘5000’ in the Fury HD 5000 name indicates that these binoculars will range out as far as 5000 yards. That’s a distance most of us can’t see, let alone attempt to shoot.

It’s important to note the two ranging modes available with the Fury – the factory-set, ‘HCD’, and ‘LOS’ (line of sight). HCD stands for horizontal component distance which is Vortex-speak for “takes into account the angle of the target to the shooter.” This will come in handy later when I discuss the long range shooting course, but it’s also of extreme importance when we hunters are shooting in mountainous terrain.

If the user wants to change the settings, they simply activate the ranging mechanism by pressing and releasing the Measure button and then holding down the Menu button for  about four seconds.

Pressing the Menu button both saves the selection and moves the rangefinding settings to the next component (in this case, yards/meters). The user simply repeats the process until they have entered all of their desired settings.

The final step is to save all of the selections entered by depressing the Menu button for about 4 seconds. If the user is me, and thus likely to forget to press the Menu button at the end of this sequence, the settings will be saved when the Fury automatically powers down the ranging component.

Sawyer Briel of Vortex Optics provided the following photograph showing the information displayed when using the Fury HD 5000 for rangefinding. The reticle was placed on the specific object (in this case, a non-game animal!), the Measure button was depressed and a range of 374 yards was the obtained. As seen from the display, the user selected HCD mode. To range a second object, the reticle is placed on that target and the Measure button depressed again.

That’s as complicated as it gets. Now, on to the tests.

Can it Range ‘Deer-Sized’ Objects? I wanted to get an estimate of the Fury HD 5000’s capacity to range deer-sized objects. Even though she’s nowhere near the size of even a smaller-than-normal Georgia whitetail, my wife Frances volunteered to be my ‘target’.

We headed to our back yard where we used our 200-foot tape measure to determine actual distances to various objects. I then ranged the objects with the Fury HD 5000; trees, bushes, and my not deer-sized wife.

The values returned by the Fury differed from the tape measurements by 0 to 0.1 yards. In other words, they were dead-on. As important, the rangefinder was able to pick out Frances from surrounding brush, bushes etc. This latter observation gave me hope that it would do the same when pointed at actually deer-sized animals.

How Far Are Those Range Targets? 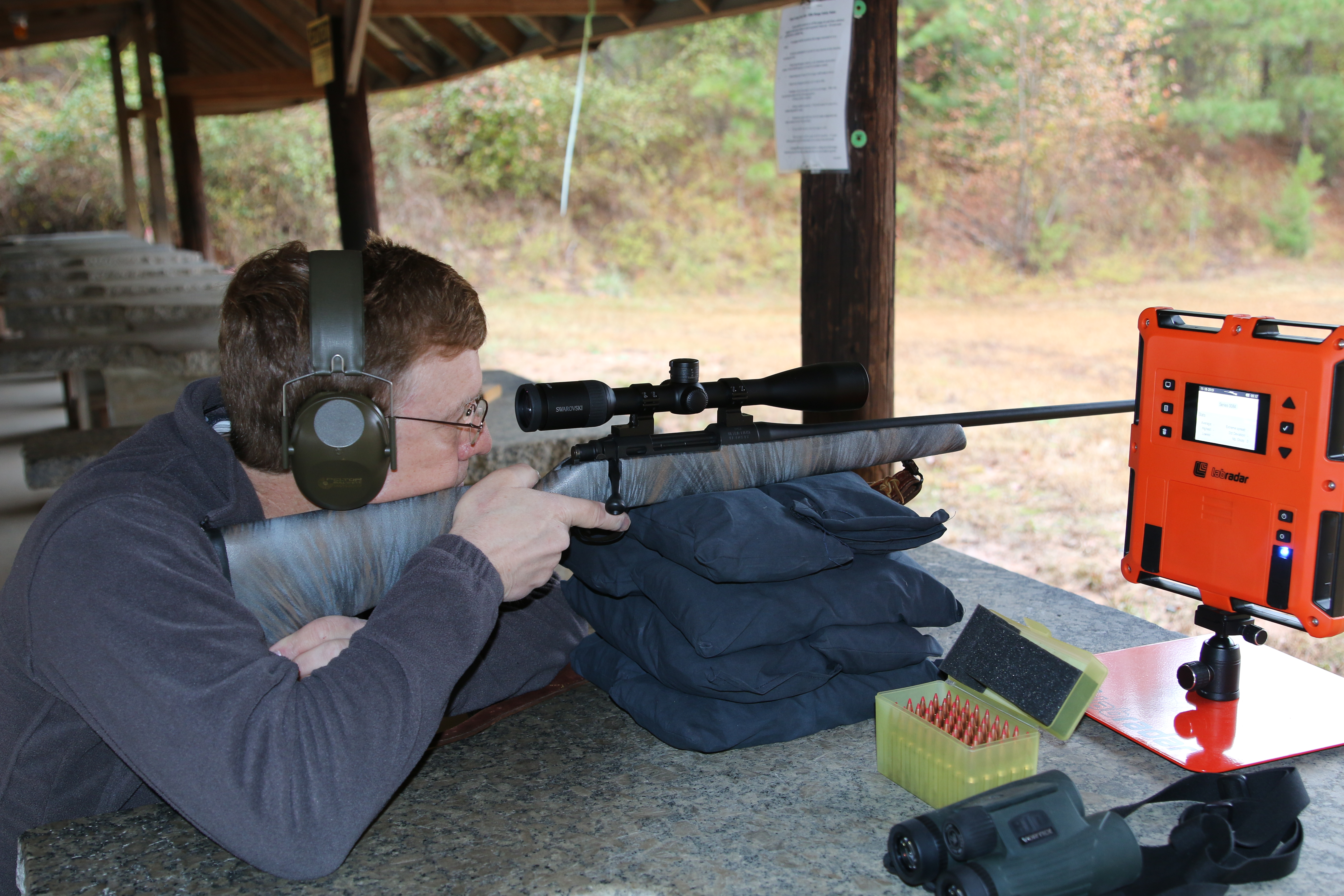 My next test of the Vortex Fury’s capacity for ranging objects occurred on a trip to my local gun club. I went there to sight-in and review a variety of rifles.

The first two agree with the fact that I was ranging from the back of the bench, rather than at the end of the rifle barrel. Initially I assumed that the 300 yard and 400 yard values were due to variations in estimates within the Fury itself.

My further tests, particularly comparisons with other rangefinders at the GTI course, suggested that the gun club backstops at the two longer distances were slightly closer to the firing positions than they should be.

A Couple of Deer Hunts For all the hunting haters in the crowd, you might be happy to know that I didn’t kill a deer on either of my trips into the Georgia woods with the Fury HD 5000 binoculars. I did, however, spend some wonderful hours watching nature wake up, go through high-activity and then go back to sleep.

It really wasn’t necessary to shoot a deer to collect the data for this review. Here are the observations made during these two hunts:

1) There was no noticeable difference in clarity of the binoculars when used in full-sun compared to 20 minutes after sunset. Brightness and visibility were excellent.

2) The Vortex Fury was able to range objects located in shadowed areas from 10 minutes after sunrise and up to 20 minutes after sunset. In open areas, the Fury HD 5000 gave range estimates during the entirety of legal shooting light.

3) The values provided by the Fury, when ranging the same object, never changed whether I was ranging in low or full light conditions.

4) Ranges were obtained on deer-sized objects (including 1-year-old bucks, mature does, yearlings and fawns) throughout shooting light, at distances up to 125 yards.

To put it simply, the Government Training Institute – Legion‘s precision rifle course provided the most stringent conditions to analyze the Vortex Fury’s ranging capability. It wouldn’t have been possible to successfully participate in the GTI course without accurate rangefinding capability.

We shot from various elevations at target distances between 70 and 740 yards. Most us lacked the ability to manually estimate the distances.

On Day 1, the Vortex Fury was required to provide distances of 10 targets scattered across a field. On Day 2, there were 16 targets for which distance data were needed. The distance ranged by the Fury covered 50 to 740 yards.

After using the Fury to record the distances to individual targets, I asked multiple students the distance provided by their rangefinders. I then checked with the instructors to identify “actual” distance. In every case – over both days of the course – each of the distances calculated by the Vortex Fury agreed within 0-2 yards with all other readings, including for the longest target distances.

The only instances in which the Fury differed significantly from other rangefinders was when calculating distances to targets positioned at extreme downward angles to the shooter (Day 2 from the rooftop of a 10-story building).

If the non-Vortex rangefinder lacked a setting analogous to ‘HCD’, and thus was only capable of providing line-of-sight (LOS) readings, said rangefinders would provide inaccurate (i.e. greatly inflated) distances. In fact, a number of students who possessed ‘LOS-only’ rangefinders began relying on the Fury’s distance values.

The final piece of important information for this review relates to the size of the GTI targets. None of the targets exceeded 24 x 24 inches. Most were ~18 x 20 inches. Some were  about 9-inch diameter circles. Even at the longest distances (up to 740 yards), the Vortex Fury gave consistent, repeatable readings from these diminutive metal targets.

Glass Quality * * * * *
The multicoated Vortex Fury HD 5000’s optics combined with the 42mm objectives provide excellent light gathering and transmission. Edge-to-edge clarity was also excellent without fringing. I used the Fury in some very low light conditions, as well as full sunlight. It gave uniformly repeatable readings in all circumstances.

Durability * * * * *
From my months of testing the binoculars, I saw no indication that the Fury HD 5000s wouldn’t stand up against tough conditions – rain, cold, dirt and heat were encountered during my various analyses. The Fury performed perfectly in all environments and the ArmorTek lens coating and rubberized chassis cover show almost no wear.

Precision * * * * *
I’ve checked, re-checked and re-re-checked the rangefinder distances provided by the Fury. I’ve verified them in wildly differing lighting settings and with multiple other rangefinders at the GTI course. Not once did the Fury’s readings vary significantly from its own prior values, or those of other rangefinders on either reflective or non-reflective targets. The ONLY variations occurred when other rangefinders were providing erroneous readings due to targets being placed at extreme angles.

Utility: * * * * *
I used the Fury in an extremely wide range of applications, the kinds of situations that shooters buy rangefinding binoculars for. The Fury HD 5000 binocs worked perfectly in all situations and made my shooting easier and more accurate.

Overall * * * * *
After using these things for months now, I intend to purchase the Vortex Fury HD 5000 binoculars. I guess that should indicate that I was won over by their performance across all the applications and environmental settings in which I placed it. I’m convinced it will perform flawlessly for me, both as standard binoculars and — even more importantly — as a rangefinder to help with upcoming rifle reviews and future hunts.

Except where noted, all photos courtesy of Mike Arnold.