When I was putting together my gear plan for the Pecos Run n Gun, I knew I’d need a speciality optic. One of the stages goes to 400 yards and my eyes have never been my strong point. Originally, I had planned on using the SMRS from Bushnell, but I wasn’t enthusiastic about packing around a pound and a half of scope so I needed another option. I already owned a Leupold Mark AR, but I felt it didn’t have enough magnification and I’d watched Nick bump the uncapped windage turret on his scope during last year’s hunting season. Subsequently, Nick missed a nice buck. Lamenting over my predicament over lunchtime tacos with my shooting buddy, I got a very generous offer to borrow a SWFA SS HD 1-6 x 24 . . . Said buddy had purchased the aforementioned SWFA scope for local 3 gun competitions, but after running it a few times, he wasn’t totally in love and opted for something else. As such, the SWFA was sitting in his safe until he made time to sell it. And he had checked the optional boxes on checkout to get the throw lever and Butler Creek Scope caps. He was also kind enough to include a one piece LaRue mount. What a guy! The SWFA unit is an illuminated reticle, variable power, first focal plane riflescope intended for what can mostly closely be called “dynamic” shooting situations. Situations that fit the bill would include your average Texas 3 gun match where distances in the course can be anywhere from 25 yards to 300+ within the same stage. You can certainly do it with a red dot, but life gets easier with 6X magnification. The SWFA SS is configured with milradian adjustments and a milradian reticle so no mental gymnastics are required to use it. The body of the scope seems quite well built, and all of the controls are very crisp to the touch. A great deal of thought seems to have gone into the design of the turrets on the SWFA model. First and foremost, their unit of measurement matches up with the reticle, something that should be obvious but I’ve seen mismatched units (MOA vs Mil) on a good many scopes in the market. Each full revolution gives you 10 milradians of adjustment (36″ @ 100 yards). Second, the turrets have a very positive click to them and require a bit of “oomph” to get them going. Personally, I’m a fan. I don’t want to miss a target because I bumped a turret loose. On that note, the SWFA turrets can be zeroed once your rifle is zeroed by loosening the hex screw, lifting up, and spinning the turret to the desired zero. I REALLY appreciate this feature since it gives you the ability to double check your turrets before you squeeze off a shot. Easily one of the coolest features though is that the scope is designed to be run with the turrets either capped or not. SWFA includes scope caps and thread protectors so you can choose how you’d like your scope to be set up. Traditionally, I’m fond of dialing for elevation, and holding for wind. I was able to set up this scope with the windage turret capped and the elevation turret exposed so that I could dial as necessary. It turned out that the only stage during the Pecos Run n Gun where I used this was on the “long” course where I was presented with a target requiring two hits at 100, 200, 300, and 400 yards. Prior to the race, I established my 100 yard zero and reset the turret to a zeroed position using the hex screw method above. I then headed out to my range and set up targets at the described distances and worked out my elevation holds for each station. Thankfully, I ended at round numbers with a half mil for 200 yards, a full mil for 300 yards, and 2 mils for 400 yards. This was easy enough to remember that I didn’t bother to mark it down on me or the gun during the race. Accordingly, the reticle is marked in half mil subtensions for windage holds though it was blissfully calm during my race so I held dead on until the 400 yard stage when I gave it a little Kentucky Windage to account for a slight breeze blowing left to right.

I was terrified of that stage coming into the race and I blazed through it thanks to the easy to operate SWFA controls. On to the reticle. Since the SWFA is a first focal plane scope, the reticle becomes nearly impossible to pick out at the 1X setting, but is just perfect at the 6X setting. To help define the reticle a bit more on 1X, SWFA used a large, thick circle to surround the crosshairs. At 1X, this essentially gives you a big holographic site akin to an Eotech which makes for quick and easy target acquisition in the <100 yard realm. Once you ratchet the magnification up to 6X, the donut disappears to the outskirts of the glass leaving you with a more traditional reticle view. Its a nifty feature, and one that I found very intuitive in real world shooting scenarios especially at closer distances. SWFA is kind enough to include a legend for their reticle so that you can use it to the maximum of its ability for windage and elevation holds. There’s a full 5 milradians in either direction from the aiming point, which seems to be about the perfect amount for range estimation and holds. I input the photo below into OnTarget to do some measurements and found that the aiming point to first hash subtension of .5 mils was spot on. Nothing more disappointing than to find out your fancy reticle doesn’t correlate with the advertised information. In this case, the SWFA checks out. A quick note on glass clarity and illumination. I almost neglected to mention the quality of the glass in this review because it is unremarkable in every way. I’ve looked through some cheap scopes to find my view of the world cloudy, green, and dark. I’ve also looked through some top tier Leupold and Nightforce glass to find a view downrange that made me question my faith because the view was so clear. The SWFA is somewhere between those, trending towards the “questioning faith” side of things. Its unremarkable in how clear it is. Similarly, the illumination is gentle and unobtrusive. During daylight hours, you need to crank it to 11 to even see the reticle light up. At night, even set to 11, there’s no bleed out on the reticle itself though the light is too bright at that setting. I found that 4-5 was just about perfect. This is truly the first illuminated reticle that I’ve been very enthusiastic about. 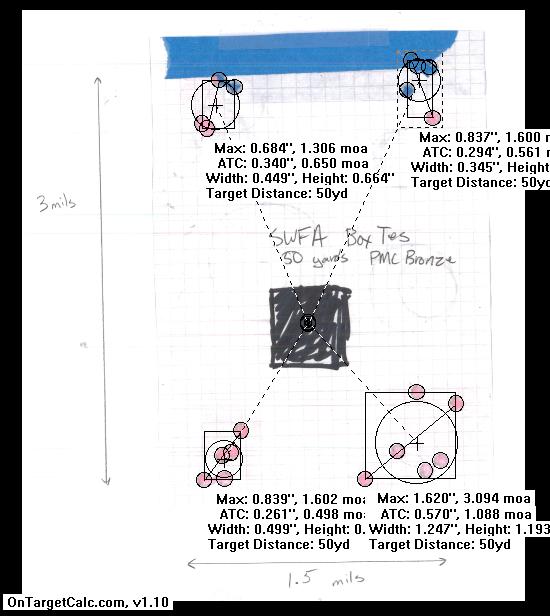 The last test to perform as part of any scope review is a box drill. In the box drill, the aiming point never changes, but the turrets are moved the appropriate number of clicks to move the point of impact some distance. In this case, I chose 3 mils vertically and 1.5 mils horizontally. I intended to shoot groups of five though I miscounted and shot four on the first group and six on the third one. Either way, we’ve got a pretty decent test on our hands with some solid results. The first thing to notice is that of the four groups I shot, the standard deviation in max spread across all four was .231. There’s some inherent inaccuracy built into this test as I didn’t use a gun that shot lasers, the computer program I used to do the math, OnTarget, is only as good as the data its fed, and last of all, there was a human involved. Coordinates for the four groups are here

Using these coordinates, I was able to find the length of the lines between these four points as well as the slope of the lines. In a perfect world, Line 1 and 3 would have a slope equal to zero which would describe a perfectly vertical line, and Lines 2 and 4 would have a slope equal to infinity to describe a perfectly horizontal line. As you can see below, the horizontal lengths are damn near perfect and well within one standard deviation (.231 milradians) based on our group size. However, the vertical line distance was off by a much more significant number.

In this case, .290 and .237 milradians. This is outside of the standard deviation in max spread, and presents a bit of an issue. For precision work, this would likely be unacceptable, though it seems that the error is quite consistent. What you’d likely experience as a real world result is that a dope check vs. your ballistic calculator would show your shots impacting lower than expected. You’d revise your ballistic calculator to reflect this real world data and then forget about it.  If you changed scopes on the gun to something with turret adjustments more in line with a true number, you might have to reevaluate your ballistic modeling.

As an interesting and geeky aside, we can use the aforementioned slopes of these lines to find the angles between them to see if the lines of our “box” are perpendicular and parallel.The math to describe that process can be found here, and using it, I came up with the following results.

Those are damn close to ninety degrees and I’d say given the shooter, the lack of laser like accuracy from the gun I used, and my experience with the scope, I’m comfortable saying that those four shots describe enough of a box for me. Your mileage might certainly vary.

Build Quality, Fit, & Finish * * * * *
At the dinner for the range officers for Run n Gun, I was lamenting a failure I’d experienced with my pistol when the event organizer laughed and told me, “If it survives here, it will survive everywhere.” Given that the SWFA scope didn’t fail or let me down in any way during that race, I feel confident giving it a five star rating in this category. The finished surfaces look flawless, the turrets have a crisp click to them, and the whole unit generally feels built like a tank.

Optical Clarity * * * *
Though not a Nightforce or high end Leupold, the glass on the SWFA is certainly crisp, clear, and free from defects.

Accuracy * * * *
The reticle is spot on versus the advertised values and is great for holding off for wind or elevation. I found the turret adjustments to be hit or miss. The horizontal adjustment was spot on, but the vertical adjustment seemed to be off by .2 – .3 mils. That’s a small error that equates to less than 4 inches at 500 yards, the range I feel this scope is probably designed for. Ultimately, you’d probably never know that error existed and you’d dial an extra two clicks and forget about it.

Overall * * * *
I’ve been wanting to test a SWFA scope for a long time, and I was pleased with the first model I got to put my hands on. This is a fine scope and would be a fine addition for the Texas 3 gunner, pig hunter, or run ‘n gunner.