Only a few years ago I was happily scoffing at those who owned pistol versions of “proper” rifles. Their clunky form factor made for an awkward shooting position and a generally strange experience on the range. It was only with the introduction of SB Tactical’s SB-15 pistol arm brace that these guns finally became both usable and somewhat attractive looking. Naturally, other companies saw the sales success of the SB-15 and wanted in on the action. One of the more popular entries is Shockwave Technologies’ Pistol Stabilizer, and they were nice enough to send us one for review . . .

First, a note. Some may have recognized the name “Shockwave Technologies” from their legal dispute with SB Tactical, and with the exception of this note of its existence, we’re not going to be discussing the lawsuit in this review. We will be comparing the functionality of this pistol arm brace, but make no judgement as to whether the design infringes on SB Tactical’s patent. I say this because I know damn well their lawyers read this site and I really hate wearing suits so I’d like to avoid being called as an expert witness anytime soon. The concept behind the pistol arm brace is simple: instead of having a raw buffer tube protruding from the back of your gun, you slap one of these devices on which rests against your extended forearm. The added stability is intended to make firing the gun from that position easier.

In theory it makes a lot of sense, and when done right, other products using the same basic concept have helped disabled veterans and others fire their pistols more accurately and more comfortably. The question at hand is whether Shockwave Technologies’ version meets the standard set forth by the competition.

Unlike other new gadget manufacturers, Shockwave Technologies proactively asked the ATF to rule on whether their device is a stock or not. According to the ATF, blade stabilizer isn’t a stock so long as its use is consistent with the intent of the manufacturer. The ATF even even went so far as to add a warning in the approval letter to that effect.

The problem is they’ve been known to go back and reverse their position on these rulings so that approval is worth less than the paper it is printed on, but for the most part their position (so far) is consistent with the letter of the law. The brace can only become a stock when the gun is “redesigned” to become a rifle, so as long as the manufacturer and the end user agree on how the gun will be used (as a pistol, not shouldered) everything should be A-OK. The pistol stabilizing blade is made from a rigid polymer material (i.e. plastic), which is a departure from the soft rubbery construction of SB Tactical’s versions. The brace still mounts to a standard pistol buffer tube, but because the brace is a hard plastic instead of soft rubber you can’t rely on the inherent friction of the material to hold it in place. There’s a hex screw on the underside of the brace that you need to tighten against the tube to keep it in place.

Rather than wrapping around the arm of the shooter as SB’s models do, Shockwave’s Blade is designed to rest against the inside forearm stabilizing the pistol that way. There’s some documentation that the brace might work best when strapped onto the arm of the shooter somehow, but the package for the brace didn’t come with any such material. Since we review products “as-is” here at TTAG none of the testing we did involved the use of a strap. There are some cutouts in the brace that appear to be designed for a strap (or a sling) though. Aesthetically, the brace does the job. The pistol (an MPX in this case) looks much more like a complete gun with the Blade in place as opposed to something Snake Plissken might tote around in the ruins of New York City. The gun appears much more balanced, and the hex screw on the brace can be used to adjust it for the desired length of pull and center of gravity on the gun. In fact, that adjustment for weight might be the only genuinely useful thing about this item. SB’s brace locks onto your forearm and provides real support for the gun. It physically straps onto your forearm and transfers the weight of the firearm out of your hand, allowing your fingers to focus on proper grip and trigger pull instead of worrying about dropping the firearm. With the Shockwave brace there’s none of that weight transfer — in fact, it just adds more weight to the gun. The thing isn’t comfortable at all to hold one-handed, and even two-handed it it’s a bit unwieldy.

In short, it’s not a very good brace. What it is good at is being a stock. The Shockwave Blade’s rigid form factor means it feels solid and allows for excellent transfer of recoil to your shoulder. The slim profile of the single blade contributes to the great stock-like ergonomics and means the rifle shoulders very comfortably. In short, it makes for a pretty good stock.

From where I’m sitting this is the only reason this thing exists. It isn’t better at being a pistol arm brace than the competition — in fact, it’s terrible at it — but it serves as a much better stock for those who don’t really care about conforming to the National Firearms Act. It allows the owner to have a firearm in their possession that is 100% legal as a pistol, but can be “converted” to use as a rifle in the blink of an eye just by shouldering it. It’s perfect for a trunk gun or “bail out” gun. You know, a situation in which violating the National Firearms Act is slightly less important than your immediate survival. 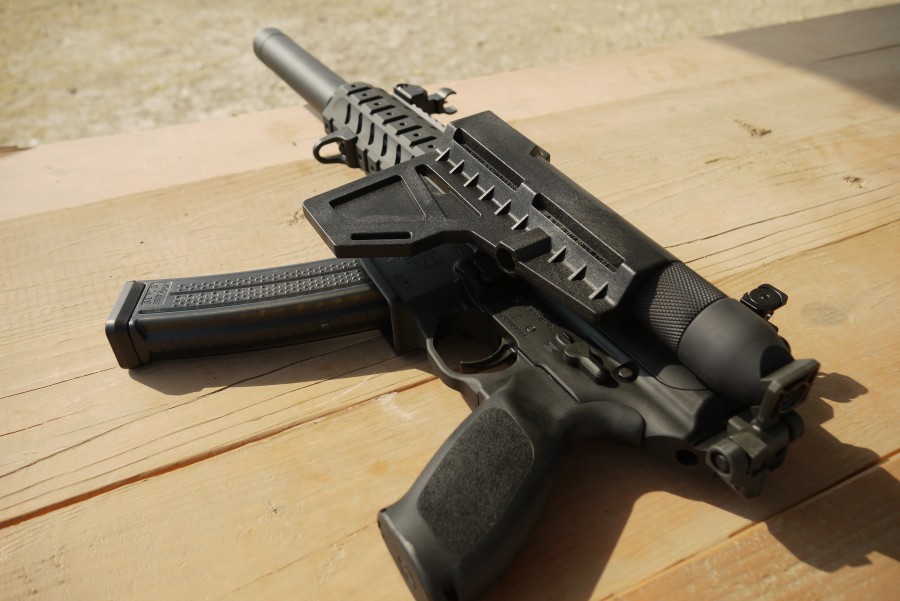 In reality, that’s why you’d buy the Shockwave Blade over the competition. Not because it’s a better product when used as directed, but because of the “fringe benefits.” That’s okay by me, but by the same token I’m not going to go out of my way to cover it up. The SB tactical pistol arm brace was originally designed and intended to help one specific person hold their AR-15 pistol better. It legitimately works in that capacity, better than anything else on the market. The Shockwave Technologies brace appears to have been designed to be a stock, using that same exemption that SB Tactical pioneered for cover while not actually providing any benefit to people firing their guns as a pistol. It’s a pistol arm brace just like Rachel Dolezal is black.

Build Quality: * * * *
Build quality is pretty good. There are some residual lines form the molding process, but overall a very nice job.

Utility: *
As marketed, this thing might actually be worse than leaving your pistol buffer tube bare. There’s some marginal utility if you cant your firearm to the side, but overall I’m not feeling it.

Overall: * *
Compared to the competition this falls way short in terms of the stated design goals. However, the unstated benefits are definitely superior. If you’re looking for a sneaky way to get a stock on your pistol, this is the thing to buy. But if you’re actually looking for a pistol arm brace, you’re going to be disappointed.