Shield Sights isn’t yet a household name in the U.S., but it should be and likely will be soon enough. SHIELD has been around for about 30 years making optics, suppressors, suppressed weapons, stocks, and more primarily for the British military and special forces. They made the red dots for Trijicon back in the day and were early innovators in the LED red dot optic game. SHIELD makes the JPoint that has been on my G19 MOS since day one, but now they’re selling their own, improved mini red dot on this side of the pond, and it’s called the RMS . . . When placed next to the JPoint (which is sold as the SHIELD SMS outside the U.S.) — SHIELD left, JPoint right in both photos above — the RMS is obviously extremely similar. Dimensionally it’s effectively identical. They both use a polycarbonate lens instead of a glass one, and they both run for a shockingly long time on a single CR2032 battery. They both fit the same mounts. The RMS, though, is metal rather than plastic. It’s machined from a block of aluminum then hard coat anodized. Don’t worry, it’s still a featherweight at 17.5 grams (0.61 ounces, which is half the weight of a Trijicon RMR). The RMS exudes a look and feel of higher quality due to the materials, precise machining, and nice finish. Those lightening cuts in the sides add some flair and visual interest, too. I must admit, though, that despite the JPoint’s and RMS’ two- to three-year battery life with regular use, the feature I was most excited for on the RMS is its side-opening battery tray. 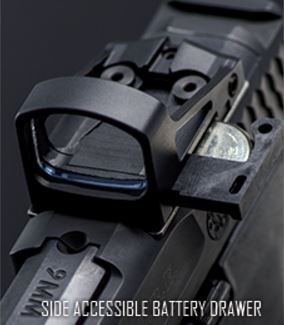 Whereas the JPoint had to be removed from the weapon in order to swap the battery — as is the case with most micro red dots — the RMS is offered with a slide-out tray that allows the battery to be swapped quickly and easily while the sight remains firmly mounted. Another great feature of the RMS is its thin base. It’s so compact that, with the right mount or milling job, it’ll actually co-witness with standard-height iron sights. No need to purchase extra tall “suppressor sights” so they can be seen and aligned through the window of the optic. Aside from the JPoint, I’m not sure there’s another red dot on the market that can make this claim. Taking that a step further, you may have noticed that my GLOCK doesn’t even have a factory rear sight on it. While the RMS works perfectly with the rear sight in place, I just didn’t see a point to keeping it. The RMS has its own rear sight notch built into the body, and it happens to be the perfect height for the factory GLOCK front sight. As I generally prefer an all-black rear vs. a 3-dot arrangement or, worse, the GLOCK U-line rear, it was an easy decision to drift that superfluous piece of plastic off. Thanks to the polycarbonate lens, there’s no distortion or color shift when looking through the RMS. It doesn’t require a red coating and gets only an anti-reflection and anti-scratch treatment. Glare and “visual signature” from downrange are reduced as compared to a glass lens RDS. Additionally, the polymer lens is both lighter weight and more impact resistant than glass. It falls short vs. its glass brethren only in scratch resistance. A light sensor in the RMS adjusts the dot’s brightness automatically. And very well, I might add. For instance, if you’re in deep shade but your target is in full sun, the sensor does a good job of recognizing the brightness of your target area and adjusting the dot accordingly.

The 4 MOA or 8 MOA dot gets plenty bright enough to be clearly seen even in full, glaring daylight against a light background. The photo above does not do it justice, as my cell phone simply couldn’t handle the situation. Go two photos up to the one where I’m holding that tree hostage and the crisp, clean, 4 MOA dot on this RMS is that bright and obvious even in full sun, too. Then in the dark it automatically and almost instantaneously adjusts down. Low enough, in fact, to be night vision compatible. By the way, left in the dark — in a safe, with the cap on, or carried concealed under your clothes — the battery is good for at least four years. With a good dozen or more mounting options, the RMS can be readily adapted to other platforms. Mount it to a race gun, onto an ACOG, Elcan Specter, or a scope, off at a 45-degree angle on an AR, to anything with a Picatinny rail with or without risers, to a shotgun, to an MP5 or a USP, to a standard GLOCK via the rear sight dovetail, and more. Small, lightweight, flawlessly auto-adjusting, and clear and distortion free, the SHIELD RMS is the best mini red dot sight on the market. Form Factor * * * * *
It’s likely the lightest mini red dot on the market and it has the flattest base, too. So flat, in fact, that standard-height pistol sights co-witness with it. The window size is more than sufficient, yet doesn’t add width to most pistol slides and is small enough to effectively use as a ghost ring sight (“window of death”) at closer ranges. It has a relatively thin bezel and a nice shape to the front face for use in slide manipulation. Aesthetically the RMS looks cool, but is still understated compared to some of the competition.

Function * * * * *
Crisp dot. Parallax free, distortion-free, and color-shift free. Automatic brightness adjustment works incredibly well from as dim to as bright as one could possibly need it. One CR2032 runs it for 2-3 years of regular use and can be replaced without removing the optic. The RMS is so lightweight that it shouldn’t affect slide cycling on any pistol. Integrated rear sight notch works just right on a GLOCK — likely other pistols, too — and standard-height sights can co-witness. Strong enough to withstand drops and direct impacts or use as the sole means of racking a pistol slide. Highly water resistant.

Quality * * * * *
Machining and finish are near-on flawless. Fit is perfect. It holds up to abuse. I’ve experienced a major brand micro red dot fritzing out on my pistol before and have seen a few with cracked lenses. The polycarbonate lens in the RMS is not only clearer and more distortion-free than most glass ones but it weighs less and is, in most ways, more durable. The RMS also seems to shrug off water immersion better than most of the competition that’s also designed with open-bottom battery trays.

Overall * * * * *
I think the SHIELD RMS is the best micro red dot sight on the market, or at least as good as it gets. No buttons, no settings, it just works and works well.