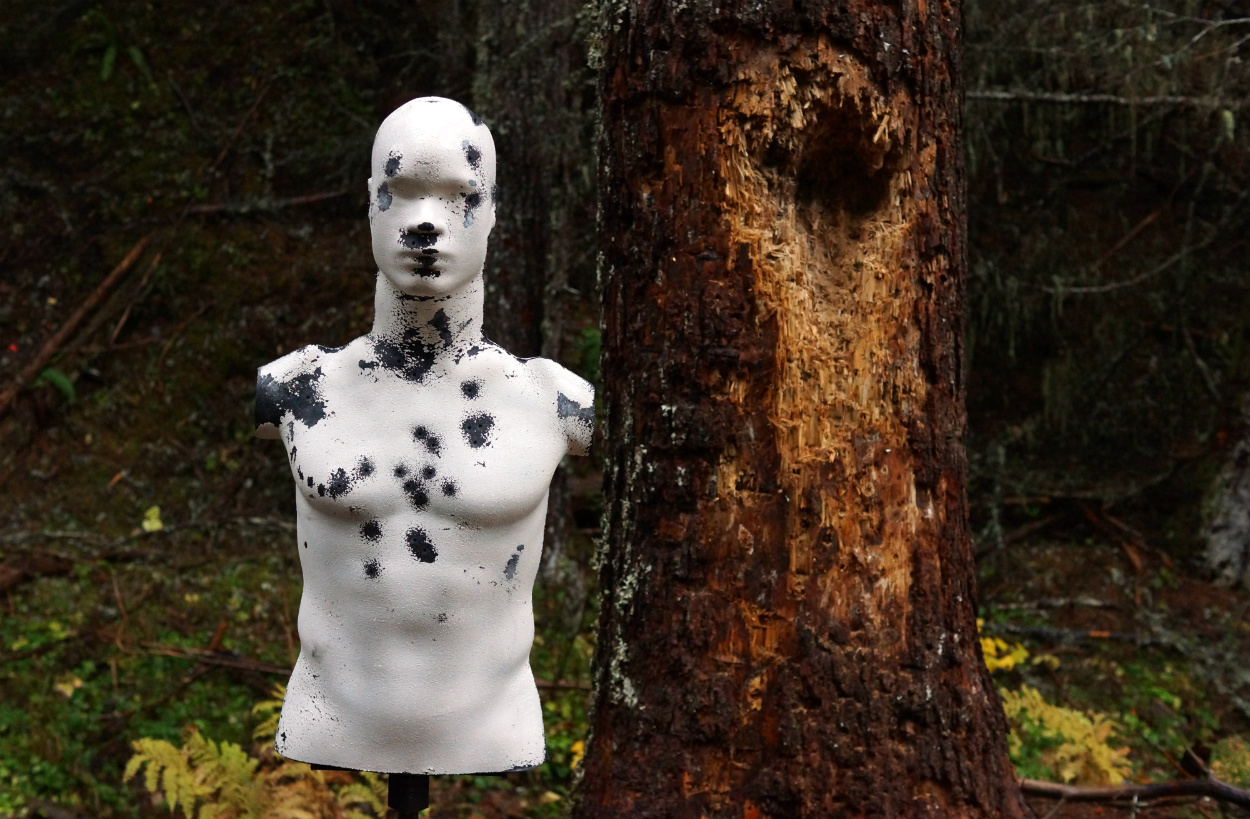 The armless, legless, bullet hole-ridden white dude you see above is 30 lbs. of recycled rubber target shooting action from Rubber Dummies. These 3-dimensional torso targets are expected to survive a good 4,000 or more hits. They provide for more realistic self-defense training than flat paper targets are capable of, and are quickly and easily “reset” so fresh bullet impacts are clearly visible (a la “Shoot N See” type targets). I picked up a single target starter package in late summer, and so far. . .

It’s been great. However, I admit I did have some reservations.

The Rubber Dummy is a pretty realistic human target. To be honest — and I’m sure I’ll take heat for this in the comments — I very rarely shoot at human proxy targets. That includes printed ones. USPSA/IPSC targets and their squared, vague torso silhouette shape is as close as it regularly gets. I’m not really a tactical sort of a shooter. Yeah, I’ve taken a handful of defensive pistol courses and I carry a pistol for self-defense purposes and wouldn’t second guess using it if needed, but most of the shooting I do is for recreational enjoyment rather than for self-defense practice.

It’s obviously pretty silly and it didn’t cross my mind even once when ordering the target, but upon taking him out of the box I felt a slight hesitancy at setting him up and shooting him. Maybe it was the weight of the target or the realistic size and shape, but I think it was mostly the decently defined facial features. It probably wouldn’t have crossed my mind if he didn’t have a face.

But that was before finding him in the guest bed with my wife . . . After that, it was off to the woods for some target practice!

Rubber Dummies says this guy will last 4,000 to 5,000 rounds, and the “self-healing” rubber compound “allows the projectiles to pass through with minimal deformation and degradation to the Dummy.” The #1 thing you aren’t supposed to do if you want this target to last as long as possible is to shoot it with hollow points or wadcutter (flat nose) bullets, as they act like cookie cutters and will remove a plug of rubber on their way through, ruining that whole self-healing thing.

But before we get to how he’s holding up, one of the coolest features of this target is how clearly visible bullet impacts are and how quick and easy it is to reset the target. By simply using a can of white primer spray paint, which is included with the starter kit along with a stand for the dummy, you can cover up the impacts in no time flat. When a bullet hits, it flexes the black rubber and the white paint flakes off. It’s easily visible from a long distance away, and the spray paint reset method is shockingly fast, easy, and effective. The way the paint adheres to the rubber and dries near-instantly is awesome. In fact, for whatever reason it even worked very well in driving rain on a wet target, as seen in the video above (pro tip: stand upwind).

In the photo above, there’s a .223 bullet hole just barely visible in the center of that paint-free impact zone. Even at close range, they just zip right through without doing any real damage. On the backside, it’s basically impossible to find the pin pricks from the .223 rounds. Most of them, that is. In the thicker parts of the target some of the rounds clearly tumbled and this did create large exit wounds. The perfectly round hole near the middle is from the molding process. The gashes are missing chunks of rubber thanks to the .223 bullets tumbling. In the thinner parts of the target, nothing like this happened and, again, I can’t even find the bullet holes. Suffice it to say that for maximum target life I’d either keep .223/5.56 away from the thick sections of the target (which still leaves most of the torso fair game) or shoot ammo that doesn’t tumble in it. For the record, I was shooting 55 grain FMJs out of a 16″ barrel with 1:7 twist. On the back, they actually appeared smaller. In the thick areas: In the thin areas: Interesting that the bullet impact effect on the paint was pretty similar between all of these calibers. Here’s a photo with the 9mm and .40 S&W holes painted over, and fresh impacts from .223 showing: Impacts from only 9mm from when the target was new (plus missing paint areas due to shipping then bouncing around in the back of my rig): While there is no audible feedback like the loud ring of hitting a steel target, there is instant and obvious visual feedback. This is actually more precise, as many times I know that I hit the steel target, of course, but don’t have any real idea where on the steel target I hit. That isn’t an issue here unless you’ve gone many rounds without resetting (painting). Additionally, the target does physically react with various wobbling and slight rocking movements upon impact. On that note, the stand that’s included with the kit is simple and stable, and easily disassembles for travel. There’s a large, flat base into which the extension pole (standard 3/4″ threaded pipe) threads, and then the dummy mount part threads onto the top of the pole. The mount is made from 3/8″ AR500 plate and has two spikes that insert into holes molded in the bottom of the dummy. If needed, the base has 1/2″ holes drilled in all four corners so it can be staked down. Quick and easy.

Rubber Dummies can be shot up close and personal. They are true no-ricochet targets as long as you’re keeping it above the metal stand. Or perhaps you’ve eschewed Rubber Dummies’ stand and have made your own from wood or have set him on the ground or something else.

This ability to fire at point blank range allows for realistic self-defense training. The target’s composition and weight means it can be struck with hands, feet, a baton, etc, or even stabbed. It’s pretty dang dense, though, so don’t hurt yourself. Most importantly, however, is the fact that Rubber Dummies are 3-dimensional. This allows for meaningful training when shooting at oblique angles. The tendency with paper targets is to aim for the X, even if you’re shooting at it from off to the side. However, in an actual self-defense shooting against a person (or animal), putting a bullet into center mass doesn’t mean hitting the sternum. To reach the vital organs from an angle, the target likely has to be hit increasingly more towards its side.

While the Rubber Dummy doesn’t quite have the front-rear depth of a real person, it provides significantly more realism in this regard than any flat target can. I have definitely been appreciating the ability to draw and shoot at the Rubber Dummy from various angles, as it’s likely a facet of my self-defense training that hasn’t been fully fleshed out. So to speak.

Oh, the starter kit comes with “kill shot” packets, which are little baggies filled with red paint (or the like) that can be easily attached to the back of the target with thumb tacks. When hit, they provide a blood spatter effect for further visual confirmation of well-placed hits. I get it, but I didn’t go there.

Rubber Dummies combines all of the best features of various types of target systems into a portable, easy to set up, economical package. The no-ricochet target provides instant, accurate impact feedback that’s easy to reset. While $129.99 for a target isn’t cheap up front, it’s very affordable over a few thousand — up to 5,000 — rounds. It’s a heck of a fun target to shoot at, too, although for fun time on the range I wouldn’t mind something without a face. Of course there is also definite, meaningful value in training with 3-dimensional, life-sized targets. These would make great additions to self defense courses, shoot houses, and the like. For anyone who owns a firearm(s) for self-defense, the Rubber Dummies are top notch training aids that can be part of all sorts of drills and scenarios.

The $199.99 starter kit is definitely the best deal, as it comes with everything necessary to get shooting — Rubber Dummy target, stand, spray paint, kill shot packets — and shipping is included. Which is saying something because it’s a ~45 lb package. A Rubby Dummy on its own runs $129.99, but shipping is 20 bucks.

Fun Value * * * *
Better if it didn’t have a face. But a reactive, “Shoot N See” type target that works at any range from point blank to the next county is always a good time.

Training Value * * * * *
Top notch for all sorts of tactical and/or self-defense training.

Value Value * * * *
Fairly large up-front investment, but it could end up costing less than paper targets over the course of a few thousand rounds.

Durability * * * *
I’m past 500 rounds through my Rubber Dummy and it looks good as new with the exceptions of the small holes from the 9mm hollow points and .40 S&W flat nose rounds — both of which RubberDummies.com specifically says are the worst things for these targets — and the missing chunks from the handful of .223 rounds that tumbled in the rubber. I’ve seen the 4,000+ round thing corroborated from other sources and I don’t doubt the target is fully capable of that, especially if you’re shooting FMJ ammo in small-ish diameter calibers that don’t tumble prior to exiting the rubber.