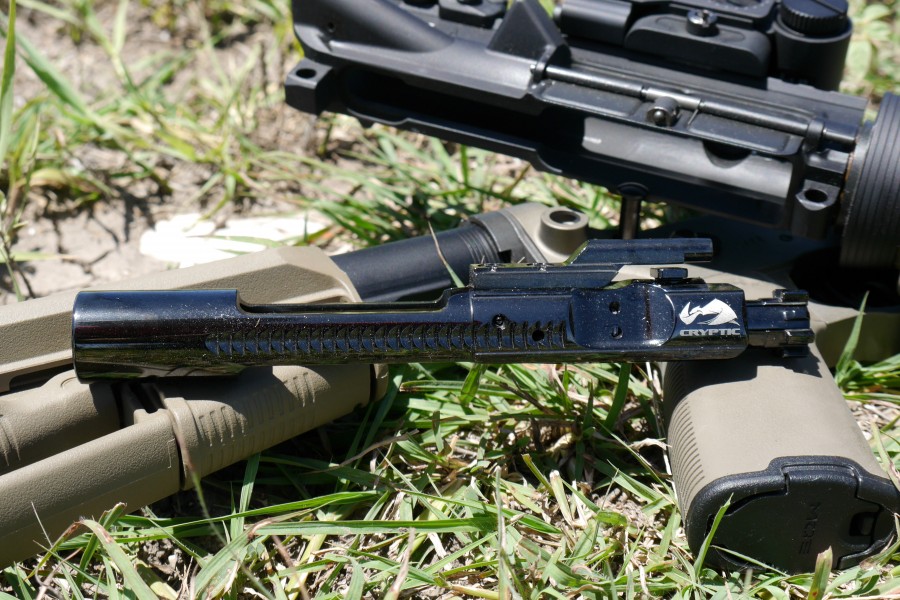 The AR-15 is a dirty, dirty girl. The gas expansion system it uses to operate sprays hot carbon all over the internal parts of the gun every time it cycles, leaving a baked-on layer of gritty, nasty gunk that can clog up your rifle and make it stop working. It sucks, and the traditional method to keep your gun running sucks even more: regular and thorough maintenance. I mean, this is 2014, surely there’s a way I can throw money at the problem and make it go away, right? That’s where Cryptic Coatings comes in with their new bolt carrier groups . . .

Cryptic Coatings (or “CC” due to laziness) is a new company that specializes in extra slippery bolt carriers. The concept is that by coating the bolt carrier with a tough yet slick coating, the gun can keep working long after the lube has evaporated. It also makes for quick cleaning of the bolt carrier group, since the coating is so slick that carbon fouling has a hard time sticking to it.

Where CC has started catching people’s attention is the look of their bolt carrier groups rather than the coating itself. Where most people are still drooling over standard nickel boron coated BCGs, CC has gone ahead and made them in colors including gold and bronze which may be of particular interest to third world dictators and aspiring rap music artists who may have had a hard time “bling”-ing out their guns while keeping them functional up until now.

I was approached by CC and asked to test out their bolt carrier group myself to see if it worked as advertised, and while I was hoping to get the “YOLO” edition gold colored BCG, they sent the Mystic Black model instead. Which I’m fine with, since it seems to have the best specs out of the entire line. Speaking of specs, the listed claims for this specific BCG are pretty wild. CC claims a coefficient of friction of 0.01, which is four times as slippery as lubricated Teflon rubbing against itself. They also claim that the coating is good up to 1,100 degrees Fahrenheit, almost twice as hot as nickel boron can get before it starts to fail. In short the thing is as slippery and tough as you can make it, kind of like a metallic version of Travis Haley dunked in motor oil.

Playing with the bolt carrier group, it does seem to be much more slippery than anything else I have tested. Even the nickel boron BCG in my 300 BLK rifle seems like sandpaper compared to the glass smooth finish on CC’s product. In fact, the finish is so mirror smooth that you can see reflections in the coating. After thinking about the best way to test the claims that Cryptic Coatings makes — namely that the BCG makes for smoother recoil, faster cyclic rates, easier cleaning, and reduced fouling — I figured I would just throw it in the worst scenario I could think of. Suppressed SBR rifle for maximum back pressure and fouling entering the chamber. No oil or lube whatsoever on the bolt. Periodic rest periods face down in the Texas dirt. And a grand total of 500 rounds fired through the gun in one sitting, shooting as fast as I could load the magazines. I may have gone a little rougher on the testing than intended. The gun was so hot by the time the last hundred rounds were fired that I was no longer holding on to the barrel — the closest I could come without burning myself was holding the magazine and gripping pretty far down on the pistol grip. Heck, by round 450 the trigger had become searingly hot to the touch. But throughout the entire test, the rifle continued to function flawlessly with not one single malfunction and no noticeable impact on the operation of the gun. Even when loading a fresh magazine, the bolt locked all the way to the rear on the last round and always slammed home with authority. When I was done, the bolt looked pretty rough. The entire thing was covered in carbon and it had lost its shine. But all of that carbon build-up was easily removed — this image shows the difference between the bolt as it came out of the gun and a small section where all I did was lightly rub a Q-Tip against the bolt. The carbon melted straight off, and the bolt carrier readily returned to its starting condition. All it took was 30 seconds of rubbing the bolt with a cloth towel and it immediately returned to its original mirror finish. The only place where I had to scrub a bit to remove the carbon was the rear of the bolt, but even that took considerably less time and effort than with a traditional phosphate bolt carrier.

There is a drawback: the Mystic Black bolt carrier retails for about $275. That’s twice the price of a traditional bolt carrier group, but there are some definite tangible benefits. Cleaning is much easier, the reliability of the gun does increase, and the gun works longer. The claims that CC makes are all true — well, except the whole improved accuracy thing. I’m not entirely sure how the coating on a bolt carrier can magically improve accuracy, but it wasn’t a noticeable difference on my guns.

If I can offer one complaint about the bolt carrier group, it would be the price. The thing costs a good chunk of change, about $100 more than a nickel boron BCG from any of the other guys, and $100 more than Rubber City Armory’s “enhanced” BCG that Chris Cerino has been pimping. But $100 isn’t really that much in the grand scheme of things, and is a price I’m willing to pay if it means I can finish cleaning guns quicker and get back to doing more important things. Like finishing Metro: Last Light.

Fit, Finish, Quality * * * * *
It definitely seems like someone took care when making this. There are no stray machining marks, the finish is even and polished, and everything feels as chunky as it should.

Reliability * * * * *
I broke the firing pin retaining pin. Well, it probably broke itself, but that’s an expected replacement at 500 rounds for this gun and firing schedule. Nevertheless, the gun kept running no matter what I did to it.

Overall Rating * * * * *
Expensive, but it works as advertised and makes cleaning a snap. In my estimation, the benefits of the bolt carrier are definitely worth the price. Not for the reliability claims or anything else, but simply because it makes cleaning the BCG after a hard day of shooting an absolute breeze.