In the interest of bringing my GLOCK 19MOS a step closer to perfection, I’ve added an extended magazine release from CruxOrd. It’s a machined, billet aluminum job that directly and easily replaces the polymer, factory unit. The magazine release is particularly simple to swap on a GLOCK; a matter of pulling the mag release spring out of the L-shaped notch in the release and then sliding the release out, followed by reversing the process. A dental pick or the like makes it even easier. Seen above is the OEM release. Its face is flat and it starts, at its rear, relatively flush with the grip frame. One’s thumb must reach to the front of the release and depress the front fairly straight into the grip frame in order to effectively activate the release. 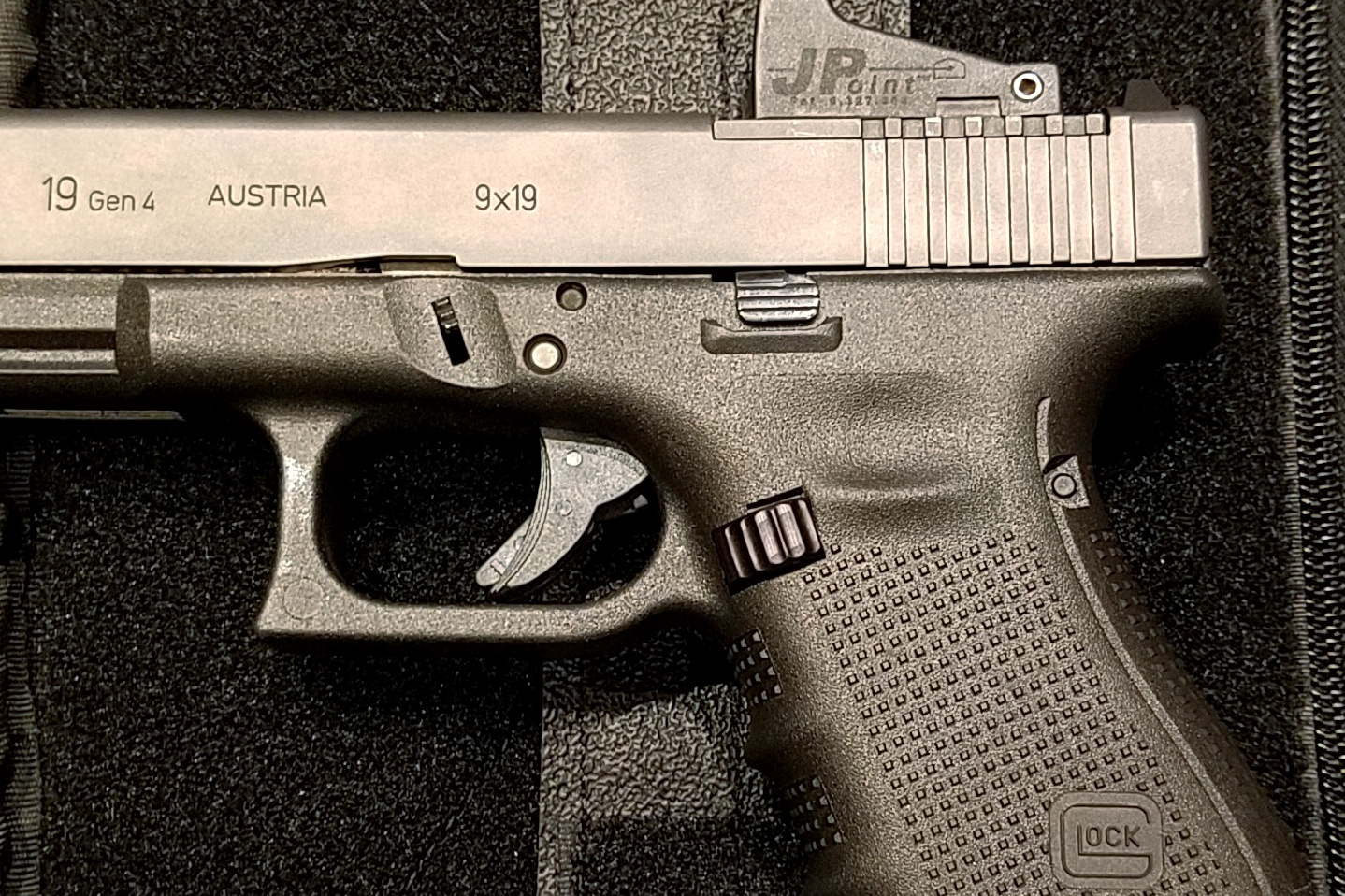 The CruxOrd unit is rounded, and extends farther above the surface of the grip frame at its rear and middle but less at its front. It actually follows the shape of the grip curve much more than the factory piece does. Interestingly enough, this makes it significantly easier to use.

Had my experience been limited to the factory piece, I would have said it was fine. Not the nicest to look at, not the nicest feel on the thumb, but it works as you’d expect and I can’t say I thought it fell short anywhere. My interest in trying out the CruxOrd piece was mostly curiosity mixed with a bit of mass-produced GLOCK boredom, but there’s no denying that it makes for a functional improvement.

Mostly, this is due to the fact that pressing on basically any part of the release button — whether pressing straight in, mostly forwards, or mostly rearwards — results in the magazine being released. I can push forwards on the rear half of the button, and due to its serrations and its shape it depresses into the frame and releases the mag. Because the highest part of the button is closer to the rear than the front (whereas it’s the extreme front edge of the OEM piece) one’s thumb does not have to reach as far to operate the control. For those with shorter thumbs or less hand strength, this is a huge plus.

However, I believe the ease of activation will be appreciated regardless of hand size or strength. Extended, my thumb wraps over the front, following the curve of the frame around, and the CruxOrd release is easy to activate whether pushing with the pad of my thumb right there on the front of the button, on the middle, or on the rear, or even with the first knuckle (that is, closest to the tip) of my thumb pressing on the highest part of the button.

Additionally, the shape of the button not only feels a lot nicer on the thumb, but it makes the button easier to find. It stands out from the side of the grip frame and, because it’s generally rounded front-to-rear and on its edges — plus it’s aluminum rather than polymer — it jumps out compared to the general GLOCKiness surrounding it. All that said, I don’t believe it’s a “competition-only” magazine release and I don’t think it’s even quite toeing that line. It isn’t so extended or so large that accidental activation is a concern (plus it retains the fairly stiff, factory spring). In fact, it still fits nicely under the molded protection of the kydex holster I use to EDC this pistol. That said, your mileage may vary if you use a holster that covers the mag release and is molded even more tightly to the factory shape than mine.

Although I’m a big proponent of holsters that protect the mag release from accidental activation — meaning that possibility is a real concern of mine for a carry piece — I find myself unconcerned with any increased risk of this from the CruxOrd unit as compared to the factory unit. If there’s a sweet spot or an ideal balance between low-profile and competition-style extended/oversized that makes the control easier to find and use yet still safe and appropriate for carry use, I think CruxOrd has found it.

Having previously found nothing really wrong with the factory piece I was more than a little surprised to like the Crux Ordnance magazine release so much. In point of fact, it improves on every last aspect of the GLOCK magazine release. It is significantly more ergonomic and feels great on the finger, its wider, deeper serrations grip better and feel better, and most importantly its rounded shape with its raised portion closer to the rear rather than at the front edge is vastly more effective and more foolproof.

The margin for error for properly releasing a magazine regardless of where on the control one’s finger ends up and in which direction one’s finger presses is widened immensely. Despite this functional improvement and ease of activation, I believe the design remains appropriate for concealed carry and other self-defense use. I like the anodized aluminum construction, and at an MSRP of $24.99 it strikes me as a good value.

Quality * * * *
Sharp, although not flawless, machining and even, albeit not perfectly even, finish. Fit is spot-on.

Comfort * * * * *
Ease of use has always made my checklist for magazine releases, but “ergonomics” were never really prominent on there. However, the noticeable improvement in comfort and ergonomics brought to the table by the CruxOrd piece compels me to add this category to its listed ratings. It really does excel here.

Function * * * * *
Meaningful improvement in function over the factory piece. It’s easier to find and easier to activate thanks in a big way to its shape and texture greatly reducing the need to press on a specific part of it in a specific, controlled direction. Despite this, the risk of accidental activation remains low.

Overall * * * * *
I struggle to find anything I can really nit pick here. If forced to find something, the machining of the serrations and rounding of the edges around the control surface creates basically infinite angles into the aluminum, which seems to have caused very slight differences in the hue and sheen of the anodizing. Additionally, the edges of the serrations have very minor “walk” to them — possibly the bit or jig was wobbling a few thousandths. It cannot be felt (not even close), and can’t be seen unless you’re up-close-and-personal and really looking for it. None of this adds up to enough of a fraction of a star rating to drop the CruxOrd mag release down a point. It’s a solid five-star product.