A couple of years ago I met Bill Wilson of Wilson Combat. When I told him I was from Central Texas, he immediately exclaimed “That’s Chip McCormick country!” It is indeed.

I knew Wilson Combat was a direct competitor of the popular Chip McCormack 1911 magazine. What I didn’t know was that the two competitors were actually friends, and Bill had nothing but good things to say about Mr. McCormick himself as well as the quality of his products.

Less than a year later, Chip McCormick would retire, selling his company to Wilson Combat. Wilson is now producing the Chip McCormick products under the CMC Products name.

I recently got a few of the new Wilson Combat-owned CMC Products stainless steel magazines, specifically their Railed Power Mags. These come in both 8- and 10-round capacity versions. Based on the quality of these magazines, the good reputation Chip McCormick spent a lifetime developing is in excellent hands.

We can infer a lot about the long-term performance of a magazine by its materials and craftsmanship. Unless you’ve got a decade and many thousands of load and unload cycles, it’s hard to fully test a magazine’s longevity. The reality is that it’s not the spring that wears out in a magazine, at least not in magazines of any real quality. In my experience, if it runs for the first 20 cycles well, it will continue to run for a whole lot more, unless something damages it. Something like dropping it, or slamming the feed lips into the gun, or stepping on an empty one, or dropping something on them, all things which happen to magazines all the time in practice, duty use and competition.

The entire assembly of the Railed Power Mag feels rock-solid and sturdy. As in, the 10-rounder-could-double-as-an-impact-weapon kind of sturdy. The main body of the magazine is made of stainless steel and is laser-welded along the rear. You’ll note the coil wire spring firmly attaches to the bottom of the patented follower. 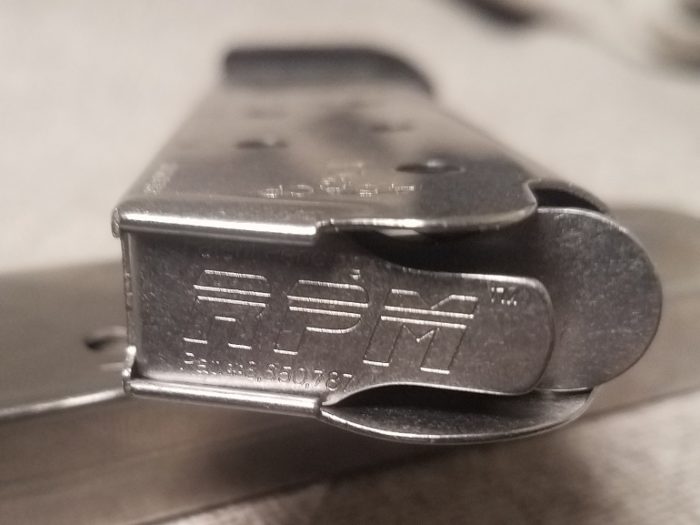 If you press down on the follower of a stock Colt 1911 magazine, you’ll likely find it wiggles around a good bit inside the magazine body. You’ll also find that the follower can tilt a great deal, allowing the nose to point drastically up if the rear of the follower or the spring catches on anything.

With the CMC Railed Power Magazine, there’s no wobble inside the magazine. You just can’t make the follower tilt upward much at all. Essentially, the feed lips have been bent over at sharp angles, all the way back down to form, well, rails for the cartridges to slide under. A traditional magazine is simply bent over at a 90 degree angle. In the photo above, the CMC Products magazine is on top with a stock Colt magazine below.

The simple 90-degree bend usually works pretty well, but those feed lips are fairy thin and prone to bending and cracking. By doubling over the lips tightly down, the Railed Power Mag not only provides a rounded and smooth surface for feeding, but also doubles the strength of the feed lips. After a detent is pushed in the base, the polymer base pad of either size magazine slips off with ease, allowing for easy cleaning and lubrication.

When it comes to the 1911, the magazine can dramatically affect the reliable performance of the pistol. Take, for instance, my Kimber Ultra Covert II with a threaded Bar-Sto barrel. I got the firearm second-hand from someone willing to sell it cheap, because it wouldn’t cycle hollow point ammunition.

With the stock Kimber Magazines, they were right. It wasn’t reliable. The gun is all but worthless trying to run the 185gr Remington Golden Saber bullet. But load the exact same rounds in a Wilson Combat magazine and the gun runs without issue.

As a result, that gun has become my test case for all magazines. If it will run in that modified Kimber, it will run in anything. Both the 10-round extended and 8-round standard Railed Power Mags ran everything through the Kimber just fine. I also tried them in two STI single stacks, a Wilson Combat CQB, two Colt 1911s, one a Series 70 and the other a Combat Elite.

I had no issue loading any round in any gun with either CMC Products magazine. I could run the Wilson and the STI reliably as 8+1 or 10+1, but not the Colts. I have no idea why.

It’s great to see that, instead of shelving a great product to protect his own magazines, Bill Wilson chose to keep making and selling the CMC Products magazines. CMC Products hails the Railed Power Mag as the “Best 1911 Magazines ever made.” I’m inclined to agree with them.

Overall * * * * *
Exceptionally well made and intelligently engineered. These are magazines to last lifetimes. They perform extremely well in a variety of firearms, surpassing the quality of the stock magazines. Worth every penny.