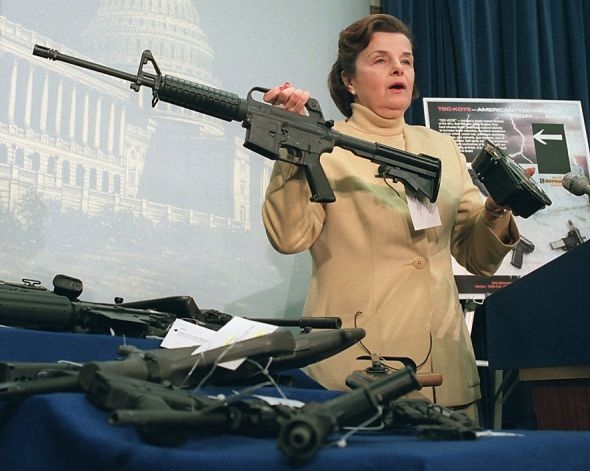 The Senate Judiciary Committee met today to mark-up the various civilian disarmament bills before the Senate, including Senator Feinstein’s “Assault Weapons Ban.” Senator John Coryn proposed an amendment that would have allowed veterans to continue to purchase “assault weapons” just like retired cops. [Click here to view Coryn’s proposal.] “Members and veterans of the Armed Forces are the most highly-trained and qualified individuals to own these weapons for self-defense purposes,” the Texas Republican told the Committee. “We should think long and hard before disarming these heroes, preventing them from protecting their families and communities.” Senator Feinstein opposed the amendment (which didn’t pass) on the basis that veterans have PTSD and can’t be trusted with guns. Here are her exact words:

The problem with expanding this is that, you know, with the advent of PTSD, which I think is a new phenomenon as a product of the Iraq War, it’s not clear how the seller or transfer of a firearm covered by this bill would verify that an individual was a member or veteran and there was no impairment of that individual with respect to having a weapon like this.

I think we have to – if you’re going to do this, find a way that veterans who are incapacitated for one reason or another mentally, don’t have access to this kind of weapon.

Here’s how I interpret that statement. First, she believes that PTSD is a new phenomenon that has only begun since the Iraq wars instead of the same condition we’ve seen since war began and therefore she doesn’t understand PTSD. Second, because she doesn’t understand PTSD she believes that everyone who has been diagnosed with it is insane and incapable of rational thought. And third, that the prevalence of PTSD in the military is so high in her mind and so dangerous that she would require screening for it BEFORE requiring mental health screenings for LEOs or civilians.

Therefore, it appears that she has this idea in her mind, a stereotype if you will, that veterans and people in the military are psychos that need mental health screenings.

These are the same veterans we hand machine guns to on a regular basis and send into battle. Feinstein considers them too crazy to own an AR-style rifle back home in the United States. Imagine that.

[The original title for this article implied that Feinstein believed ALL veterans to have PTSD. That was based on initial reports of her testimony and has proven to be inaccurate. We have amended the text to reflect her actual statements.]