TTAG reader Eric sent us an email blast from the doyennes of disarmament at Everytown for Gun Safety. [Make the jump for the text.] The email links to a petition [here] calling for President Obama to abandon legislative efforts at gun control in favor of unspecified executive actions. [Eric: “Interesting. I just got another email from Everytown thanking me for signing that petition. I didn’t sign it.] The petition’s penned by one Erica Lafferty, Survivor Engagement Manager, Everytown for Gun Safety. Everytown is “planning to put up (Take Executive Action) ads in 3,000 taxis across D.C. to make sure (the President) hears our message loud and clear.” I wonder if President Obama looks at taxis when he’s swanning about town in his limo . . .

It’s been almost three years since my mother was shot and killed. She was the principal of Sandy Hook School, gunned down along with 25 others on December 14, 2012.

Sandy Hook was one of the most devastating shootings in our nation’s history, and I was appalled when Congress failed to act. That’s why I’m asking President Obama to step up and not let this anniversary go by without action on gun violence.
The President has the power to make a real difference without waiting on Congress, but he needs to hear from people like you to know he has the support for these major steps. 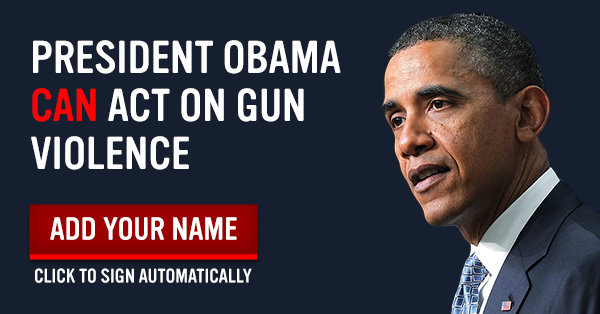 President Obama has gone to too many funerals, he’s called too many families, he’s recounted too many horrors. Enough is enough.
The President has the power to crack down on high-volume gun sellers and make them conduct background checks. He can close loopholes to keep guns away from domestic abusers. He can strengthen laws to keep guns away from schools, the places where our children learn and play. But he’s running out of time.

President Obama has said that congressional inaction on gun violence is the biggest disappointment of his presidency. But HE can act.

Sign the petition to the President and ask him to take executive action on gun violence before the Sandy Hook anniversary on December 14.
Thanks for lending your voice. It means so much to me.
Erica Lafferty
Survivor Engagement Manager
Everytown for Gun Safety