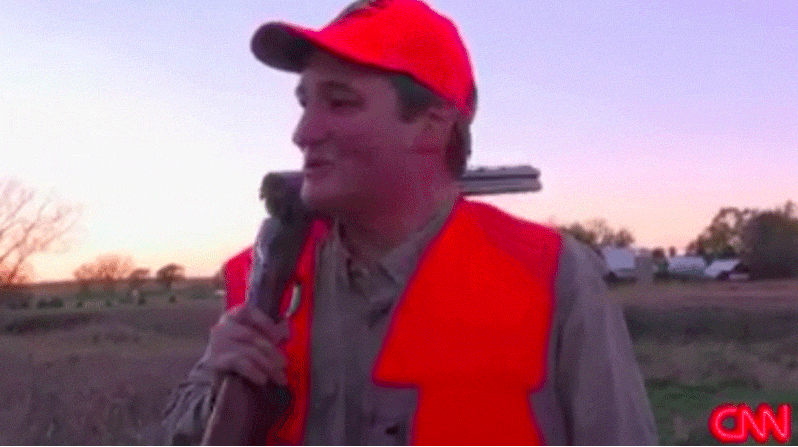 Over at the indefinitelywild.gizmodo.com, blogger Wes Siler proclaims that Republican presidential candidate Ted Cruz doesn’t know how to carry a shotgun. Siler quotes “local hunter and lifetime NRA member Scott Nathan” who pronounces that “While his action is visibly open, he is still not in control of muzzle direction. In a break-action gun the muzzle should always point down.” Siler and Nathan attack Cruz’s gun safety with both barrels . . .

As such an outspoken gun rights advocate, Cruz should also consider himself an ambassador for gun safety, particularly when choosing to make a national TV appearance while carrying one.

“He’s either a poser who doesn’t really hunt, or just a blindingly dangerous nincompoop,” concludes Scott. “He’s got moves like Cheney.”

Shoulder carry – as exemplified by Senator Ted Cruz in the picture – is a safe way to carry a shotgun or rifle. It’s recommended and demonstrated in Texas hunter safety training. From texas.gov:

The shoulder carry balances the rifle on your shoulder, controlling the firearm by a hand on the grip. Always keep your finger off the trigger and on the outside of the trigger guard. This is a good carry when walking beside or behind others. It is not a good carry if others are behind you. It might have been nice if Siler’s “this is how we do it” photo had been taken “in the field.” It would also have been useful if Siler had consulted a few other hunters, or any one of the hundreds of sports hunting organizations dedicated to conservation and firearms safety. But when you’re an outdoor writer looking to adhere to Gizmodo’s (read: Gawker’s) assiduously anti-gun rights bias, “gotcha” always comes first.