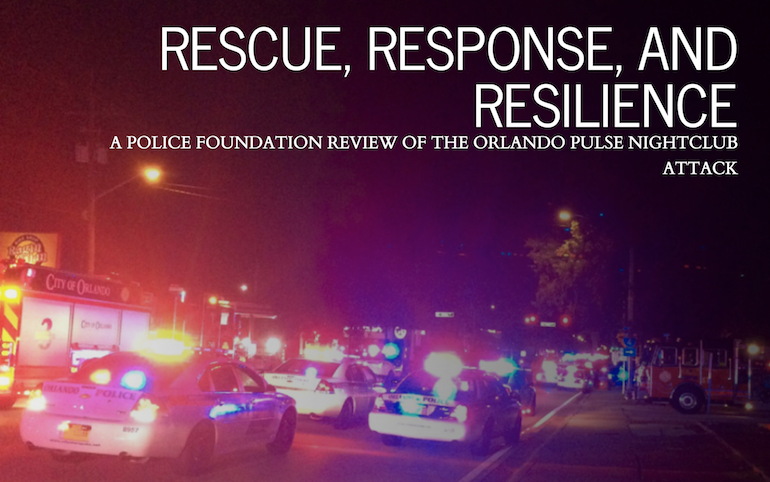 “The Orlando Police Department and other agencies performed strongly during the Pulse nightclub massacre, but additional training is needed to improve communication and prepare for future terror attacks, officials wrote in a report commissioned by the U.S. Department of Justice and released Monday.” That’s the lead at orlandosentinel.com, which somehow forgets to provide a direct link to the report [click here]. Later in the piece, an excerpt quoted isn’t so flattering . . .

“Without clear visuals and with incomplete information regarding the exact location of the suspect and hostages, SWAT officers determined it was too risky to conduct a direct assault and maintained their positions behind and around the bar, approximately 15 feet away from the entrance to the restroom where the suspect was contained,” researchers wrote.

Think about that. A SWAT team was 15 feet from the bathroom where terrorist Omar Mateen was holed-up — and stayed there from approximately 2:35am to exactly 5:05am, when they drove a Bearcat into the building, after a controlled explosion failed to breach an outside wall.

During that time — some three hours and thirty minutes — an unspecified number of hostages in the bathroom bled to death. Some of them while on the line to emergency operators.

“The OPD’s response, which was appropriate and consistent with national guidelines and best practices, saved lives,” concludes Russ Washington, the Department of Justice’s Acting Director of the Office of Community Oriented Policing Services.

Bullsh*t. The Orlando police under Chief Mina suffered from analysis paralysis. Innocent people died as a result. And no one was held accountable. That’s a disgrace. A lawsuit that ought to happen.