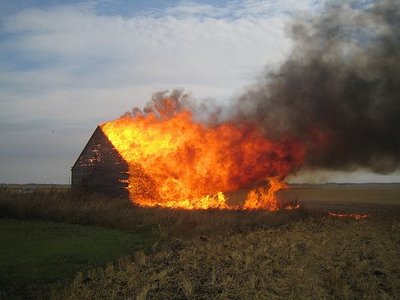 “A vigilant homeowner turned a rifle on two men suspected of setting fires in the Freeburg (IL) area over the past few weeks and held them until authorities arrived.” Turns out that the pair were a couple of serial firebugs who got their jollies by burning barns and other outbuildings on farms southeast of St. Louis. From firehouse.com: “St. Clair County Sheriff’s Capt. Steve Johnson called the two a ‘Beavis and Butt-Head duo’ because of the series of senseless crimes for which they have been charged.” But they picked one farm too many when an unidentified property owner heard a bustle in his hedgerow and became alarmed now. . .

Not wanting to see rings of smoke through the trees, let alone hear the voices of those who stand looking, he grabbed a rifle.

The two suspects were apprehended after they were discovered early Thursday morning outside a rural Freeburg home. The property owner was inside his home around 12:05 a.m. when he noticed flashlights flashing outside of his home. Johnson said the man then grabbed his rifle and was able to apprehend the two suspects at gunpoint. Not having his cell phone with him, the man then walked the two to a neighbor’s house and made one of the suspects ring the doorbell.

No one knows exactly what the two, Bryan Boide and Nicholas Haegele, had in mind, but as you know, sometimes all of our thoughts are misgiven. Ooh, and it makes you wonder. We’re hopeful, though, that now that the pair’s been nabbed, Boide and Haegele will realize that there are two paths you can go by, and in the long run there’s still time to change the road you’re on. Still, it really makes you wonder.