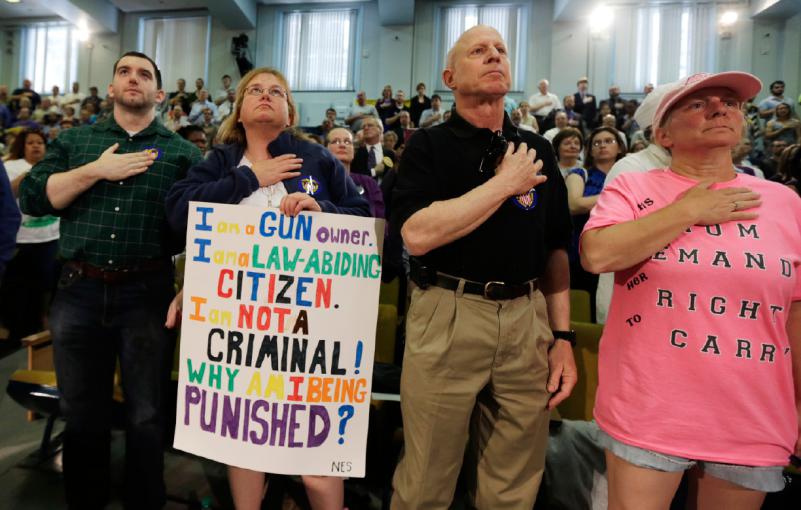 A large gun control bill was unveiled last week in Massachusetts, and a public debate was held yesterday at the Statehouse. Many supporters on both sides showed up, including State Rep. George Peterson speaking against the bill. Chief among the complaints, a section that would give local police chiefs the ability to deny a license for rifles or shotguns based on so-called “suitability standards.” Peterson wants the denials to be in writing, have specific reasons listed, and have an appeals process available to the prospective gun owners. “A lot of chiefs just refuse to issue licenses because they don’t want their constituents to have guns,” Peterson said. “I want a standard that is defined in the law.” Read on for more news . . .

Florida state law preempts virtually all regulation of firearms and ammunition, removing from local authorities the ability to control “the purchase, sale, transfer, taxation, manufacture, ownership, possession, storage, and transportation thereof.” Since they can’t actually get into regulation, Broward County, in the southern part of the state, is looking into “voluntary” gun control. The county is considering a voluntary program under which gun and ammunition vendors who sell to local law enforcement agencies — and to the public — would be asked to adhere to voluntary “sales and marketing safeguards,” including running background checks on employees, training employees in how to spot a “straw buyer” whose intent is to distribute guns to others, regularly checking inventory to make sure guns aren’t missing and running checks on gun trade-ins to ensure they weren’t stolen. The idea is being pushed by the Miami-based group Arms with Ethics, and the founder of that group, Casey Woods, says the effort was crafted “specifically to stay within the parameters of the state law.” If you’re one of the folks that owns a unicorn-like KELTEC PMR30, this from The Tactical Wire may interest you. AMITYVILLE, New York – DeSantis Gunhide®, a division of HELGEN Industries Inc., introduces a new holster fit for the KELTEC PMR30. Our Thumb Break Mini Slide, #085, is crafted from premium saddle leather. Double seam stitching and a highly detailed mold make this exposed muzzle, two-slot holster a great choice for your favorite pistol. The Thumb Break features an adjustable-tension device for an even more customizable fit. It is available in black or tan leather. Belt slots are 1 3/4″ wide. Style #085 retails for $69.99. CLICK HERE FOR PRODUCT INFO: http://www.desantisholster.com/THUMB-BREAK-MINI-SLIDE

Gentlemen, I give you the SilencerCo MAAD Brake. Do want.


Of course, then I’d be “that guy” at the range, but “Hey, guy, that’s just the sound of freedom, so quit whining. ‘MURICA!”
◀Previous Post
Next Post▶