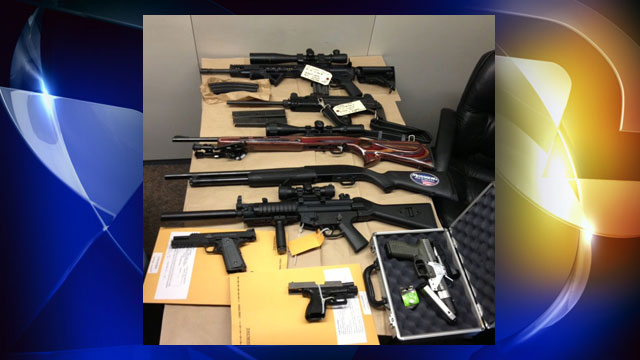 The image above (click to embiggen) is of what KTVU.com described as a “weapons cache” discovered by police executing a search warrant in Vallejo, California on Friday. The description of the weapons seized is listed as “two assault weapons, two semi-automatic rifles, a shotgun and three semi-automatic handguns.” The shotgun and handguns are gimmes, but which of the other four weapons are the “assault weapons?”

The Range Rover stolen during the carjacking and murder of a man in Millburn, New Jersey was found today in Newark, approximately 10 miles from the site of the shooting. Both suspects in the crime are still at large. Carjackings have risen steeply in recent years in the area, with nearly 300 reported through July 31 of this year. In August, authorities announced a program that uses billboards to display mugshots of convicted carjackers next to the number of years they’re serving in prison, but that apparently wasn’t a terribly effective deterrent in this case.

A Cook County (Illinois) sheriff’s deputy was hospitalized Thursday after he was accidentally shot in the foot. Details are thin, other than that what the sheriff’s spokesman described as an “accidental discharge” took place in the lobby of the sheriff’s office admin building. Whose gun actually fired the shot was either not known or not mentioned, nor was the deputy named, because standard practice in accidental shootings is to not name anyone involved.* An investigation is ongoing, and it’s not known if anyone will be disciplined. *When it’s a cop.

Cook County Sheriff’s officers carried out a raid on a 15th-floor apartment on Thursday, arrested a convicted murderer, and seized an assault rifle, a bullet-proof vest, and some ammunition. The story doesn’t say why they raided the place, but the arrestee is being charged with unlawful use of a weapon by a felon. The note is that they didn’t find the assault rifle inside the apartment, because as they came in the front door, the suspect threw the rifle, a fully-loaded magazine, and the bulletproof vest out the window. From the 15th floor. They were found on the ground below.

A few days back I asked if the Angry Dwarf, Mayor Mike Bloomberg, would be more or less of a threat once he left office. Apparently he plans to spend as much as $25 million in next years’ elections to boost gun control. In a part of the interview that wasn’t in the clip that accompanied the earlier post, Larry Pratt of GOA blasted Mayor Mike, saying Americans reject his “arrogance of power.” “I’m not sure the amount of money that billionaire Bloomberg has is going to be effective. … Mayor Bloomberg’s message is wrong and he’s going to continue to lose.” Let’s hope that Larry’s right.

VigilantSpectre Operations does a muzzle awareness drill, in a crowd, with airsoft. I found it to be a pretty interesting test of skill. Gotta have some really generous (or trusting) friends, though.


And yes, if that’s a test, he “failed” several times. Pretty sure he didn’t hit anyone, but he muzzled the hell out of a couple of heads.
◀Previous Post
Next Post▶