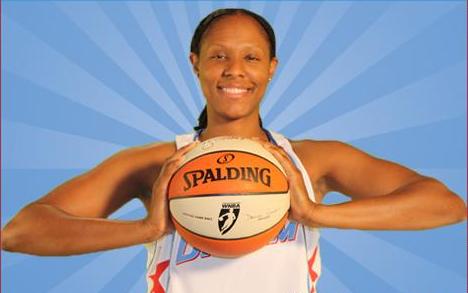 “Former WNBA star Chamique Holdsclaw turned herself over to police on Thursday night due to an arrest warrant being issued in her name,” webpronews.com. “Holdsclaw reportedly asked ex-girlfriend Jennifer Lacy if she could put some things in Lacy’s Range Rover. Lacy complied, but as she drove off she smelled gasoline and realized Holdsclaw had dumped it in the back of her vehicle. She also realized the Olympic gold medalist was following her, and when she pulled over at a friend’s house, Holdsclaw jumped out of her vehicle and began smashing the windows of the Range Rover before firing a gun inside. Police recovered a shell casing and say they believe she was trying to create an explosion by firing into the gasoline.” Too bad Holdsclaw doesn’t watch Mythbusters . . .

The team fired a Barrett fiddy into a room full o’ fumes to prove that bullets don’t ignite gasoline. Good thing Chamique doesn’t hang with women lower down on the food chain; according to police, meths fumes will ignite from a muzzle flash. Or TASER tots, ECD’s (Electronic Control Device) will also set off a big old bang.

Things to contemplate in prison . .