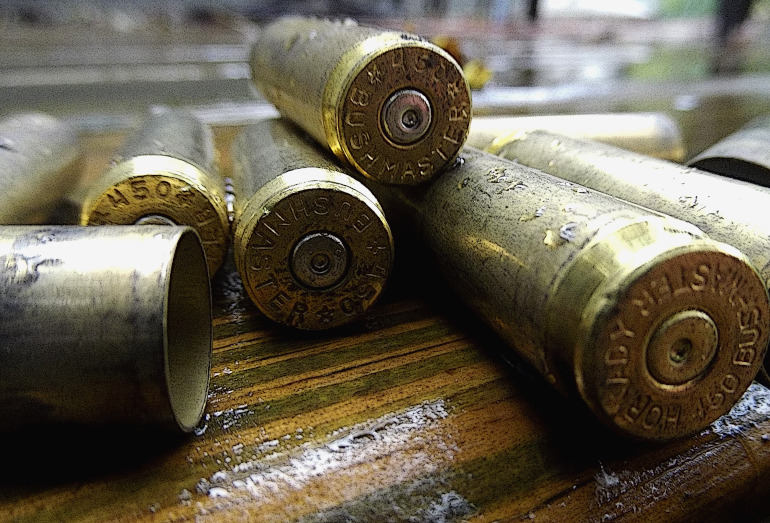 The winds of change are coming to deer camp. States across the country are now allowing the use of straight-walled cases in what used to be shotgun-only zones for deer. Michigan, Indiana, Ohio, and Iowa are among the states where a somewhat new cartridge is taking the woods and fields by storm. The .450 Bushmaster has come of age and is making waves. Buckle up, kids, we’re going to cover a lot of ground in the next 1,900 words.

The first thing that the beginner should understand about the .450 Bushmaster is that it makes very little sense at all. I’ve authored some of the most detailed content ever written on the cartridge, the guns that fire it, and its theory of use and I can’t wrap my head around it as a modern round.

The beginner should know that there are forces that drive sales and popularity, but not all are valid or even logical. The .450 BM is sort of the Star Wars: The Last Jedi of the cartridge world. It’s not what we wanted or asked for. Instead it’s just a bumbling mess of random features that we somehow have to live with. At least you’ll never get called a bigot for saying that you’d rather shoot .45-70, unlike when I say that I’d rather watch the Star Wars Holiday Special than deal with Disney’s SJW agenda.

For as much as I make fun of the 6.5 Creedmoor and its salivating, sore-wristed followers, I can see that it does have some advantages for playing games and hunting small to medium game at close ranges over legacy rifle cartridges, especially in the hands of the small-statured and the young. When it comes to the .450 Bushmaster I fail to see what it brings to the table. So why is it so damn popular today?

The answer to that is simple: vapid, ignorant bureaucrats in state and local government. To my DNR and local government readers out there, please take no offense. It is the prerogative of government to know close to nothing about any given subject when making policy, and it isn’t your fault that you are so woefully uninformed.

The .450 BM rose to popularity because it’s legal in virtually all of the Midwest and especially in Michigan, which is were just about all the good deer hunting in the world takes place. Not only that, we have the best beer, the best beaches, the most culture, the best rivalries (U of M vs MSU), the most attractive women, and Tim Allen and Ted Nugent as our unofficial state mascots. How can other states even compete? (Pro tip: they can’t.)

But for all the incredible things we have here in Michigan, we have two major problems: a shared border with Ohio and nonsense deer hunting laws. The truly amazing thing is that I can coyote hunt year-round with anything smaller than a 6.5 bore day and night, 24/7, but I can’t hunt deer in more than half the state with the same rifle during gun season.

If the DNR suddenly changed their case size laws, the .450 would instantly be forgotten. Let me repeat that for you: the .450 Bushmaster owes its success to state laws, not its superior ballistics, marketing, or ease of use. It is, in point of fact, a terribly designed cartridge that has a huge number of flaws.

The beginner to the .450 should know that they ought to buy a factory-made .450 rifle, and a bolt-action at that. I did a very large spread on my custom AR-15 build for another publisher and it was nothing but problems. I ended up having to modify almost every part in the action, including the magazines.

There are only a few true options out there that I’ve seen, and a couple I can’t release details on just yet because they’re still in development. At the end of the day, the industry as a whole hasn’t answered demand for reliable .450 AR mags. That’s currently changing, but it has been a long, uphill battle. Why does the round not work well? The answer is in the case. The case is what makes it legal for these straight-walled (non-bottlenecked) zones, but it isn’t exactly straight. There’s slight taper to the body and the head is rebated. This means that the case body isn’t supported by the magazine lips along the whole length. Rounds can lift point-up and cause the action to jam. I’ve seen it happen frequently. This does not have an impact on bolt actions that I’ve seen.

The cartridge also suffers from another problem: weak sauce loads. The cartridge was designed, albeit poorly, to fit into an AR mag and action. The problem with this is that the relatively flimsy AR action is prone to damage when introduced to the type of pressure the .450 BM can generate if loaded hot.

Unlike the .223 where you might get a stuck case, the .450 is capable of being handloaded above safe levels and still have plenty of room in the case left over. Most bolt-action rifles would have no issue with hotter .450 loads, but in a semi-automatic black rifle you’re asking for trouble.

The issue with these weak loads is that they rob the .450 of what it could be. The .450 has the potential to be a truly great cartridge, but it’s being held back by the limits of the AR platform. The result is much the same as we’ve seen with other greats that have fallen on hard times due to high pressure concerns such as the 10mm Auto, .44 Magnum and 6.5-284.

Rest assured that all are making a significant comeback now that companies are making stiffer loads and good casting decisions. I’d like to see some dedicated hot bolt-action loads that have a longer OAL to prevent them from fitting in an AR mag at some point in the future.

So now that we’ve established that the .450 isn’t that great a design, we need to look at why it’s actually a terrible cartridge for beginners. I will say some positive things about it, so be patient.

The .450 generates a tremendous amount of recoil, even in an AR. It’s comparable to a .45-70 and is relatively violent in terms of how much it drives into the shoulder. I find that fast follow-up shots are hard to get. The other concern is how loud it is. I hunted with a muzzle brake on my rifle, but I wouldn’t recommend it. It cuts recoil, but it increases blast like you wouldn’t believe. The beginner isn’t served especially well by the .450 Bushmaster. Instead, I would probably recommend something like a lever-action .44 Magnum or the like before I told a new hunter to go with this on their first trip. Ammo is somewhat expensive and can be hard to find, unlike common rounds like .44 Mag. Considering that most all deer hunting occurs inside 200 yards, with most in Michigan at only about 50 yards, it is certainly overkill.

That said, the .450 does a great deal right. It’s capable of handling huge bullets over 350 grains, has a .308 case head, making it just a barrel swap on most .308 rifles, and is easily able to kill all North American game with the right bullets, up to and including grizzly.

It is, in factory form, limited to about 200 yards in the hands of a skilled shooter, but with careful handloads can be pushed another hundred yards or so. It isn’t a long-range round, but it’s capable of delivering more lead inside its effective range than almost any other round in common use today.

Another benefit the .450 has it that it is generally pretty accurate. Many lever guns have limited accuracy past 150 yards, but the .450 BM is able to perform within MOA all the way to 200 and beyond. The trajectory of most .450 factory ammo allows you to zero at about 200 yards and hold right on anywhere inside that.

As far as rifles for this round go, you can find them from an increasing number of makers, but I’ll give you the highlights here:

Ruger: In addition to their Ruger Gunsite Scout Rifle, which may be one of the best medium-range hunting rifles you can own today, they also make their affordable Ruger American Rifle Ranch model in .450. They just released a new AR rifle chambered for it. Curiously, Ruger also makes a beautiful No. 1 single-shot in stainless and laminate that I have had the pleasure of testing.

AR Rifles: Bushmaster, Remington, Windham, and many others make good quality AR rifles for the .450. I’ve had issues with all the above as far as reliability, but that’s much more a magazine problem than anything having to do with the gun. The soon-to-be king of all the AR hunting rifles comes from Brenton USA. I have been to their facility and have seen with my own eyes the level of engineering and innovation that has been done to produce the finest .450 hunting rifles available. Keep your eyes on Brenton USA, my friends. They aren’t building parts guns or cheap imitations. I believe that their name will soon be synonymous to AR hunting and I couldn’t be prouder that they are in Michigan.

Other Guns: Savage, CVA, and several other makers have bolt actions, break-actions, and more available. The market is steadily growing in this department.

Ammunition: The struggle of the .450 has also been in the ammo arena. Hornady has a 250gr FTX load that has been the standard for years. Earlier this summer, Buffalo Bore released four loads to cover everything from deer to grizzly bear. I’ve had the chance to fire each and they are all excellent performers. Winchester and Remington also make ammo for the .450. There are more and more .450 loads coming out every week, so keep an eye out for new stuff.

The .450 Bushmaster is one of the most unlikely cartridges to achieve success in recent years, but I like to think that it has the potential to become a favorite. I like that it isn’t a long-range round. If I had to take a shot for every time I heard some braggart talk about shooting deer at 900 yards, my liver would have shut down years ago.

I enjoy that the .450 has brought a level of sport back to some otherwise foolish and idiotic trends in hunting. It’s not exactly a classic, but one day it might get there. Hell, it may be known as the cartridge that introduced a new generation of deer hunters to the woods. Wouldn’t that be something?