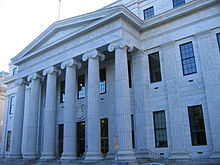 As expected, the New York State Supreme Court’s Appellate Division has denied a motion for a preliminary injunction preventing the state from enforcing the SAFE Act. The denial came in the case that attacks the Act because it was rushed to a vote under the governor’s ‘message of necessity’ rather than after the usual 3-day cooling off period. This is part of the byzantine, but necessary path the case must take to get to New York’s highest court, the Court of Appeals. Time, and the wheels of justice march on. Make the jump for a press release from We the People of New York . . .

ALBANY, NEW YORK, March 28, 2013 – – Today the N.Y. State Supreme Court Appellate Division – Third Department issued a Decision on the Motion to prohibit the state from taking any action in furtherance of the NY SAFE ACT. Had the Court granted the Motion, the Legislature would not have been able to adopt the Budget because in its present form it contains a line item for the Governor to spend $36 million dollars implementing the SAFE ACT.

While the Court did not give the requested preliminary injunction, they did agree to expedite the Appeal and will provide a decision on the constitutionality of the SAFE ACT in May.

“We are required to follow the Judicial process, working our way up through the lower Courts who obviously feel constrained by a 2005 decision from the highest Court, the Court of Appeals. It was there decided in 2005 in a case called Maybee v. State concerning the sale of cigarettes (!) that “the sufficiency of the Governor’s Message of Necessity is beyond judicial review,” said Schulz.  “We pray the Appellate Court, in its final determination, will see the intolerable state of affairs and agree that the Courts cannot finesse the Three Day Rule out of the Constitution, thereby giving license to the Governor and Legislature to pass every Bill with a Message of Necessity.  The People of this State expect the facts in any Message of Necessity to be true and reasonable.  There has to be a legitimate, proven need for speed for the constitutional requirements to be satisfied. “