Beclowning himself by threatening to kill anyone who called him a coward to his face (as long as they sign the requisite liability release first) wasn’t enough to attract any serious attention to James Yeager beyond the gun community. Declaring [via YouTube] that he’d start shooting people if the Obama Administration pursued civilian disarmament via executive order was the proverbial camel’s back-breaking straw. After having their radar pinged by the fact that Mr. Yeager claimed to possess a TN Department Of Safety Certified Firearms Instructor certificate (which doesn’t exist), the Tennessee Department of Safety and Homeland Security has pulled Yeager’s carry permit. Nashville’s newschannel5.com reports they did so based on “material likelihood of risk of harm to the public.” As Commissioner Bill Gibbons put it . . .

The number one priority for our department is to ensure the public’s safety. Mr. Yeager’s comments were irresponsible, dangerous, and deserved our immediate attention. Due to our concern, as well as that of law enforcement, his handgun permit was suspended immediately.

This is hardly the first time he’s shot his mouth off, though perhaps never before in quite so threatening a manner. Even he realized he’d probably stepped over the line and tried to walk the the whole thing back — a little — in a subsequent YouTube release. Of course, his advocacy of illegal concealed carry may have helped sway the department’s decision.

From the Volunteer State’s department of pre-crime to the District of Colombia’s “see no evil” police and [non] prosecution . . . 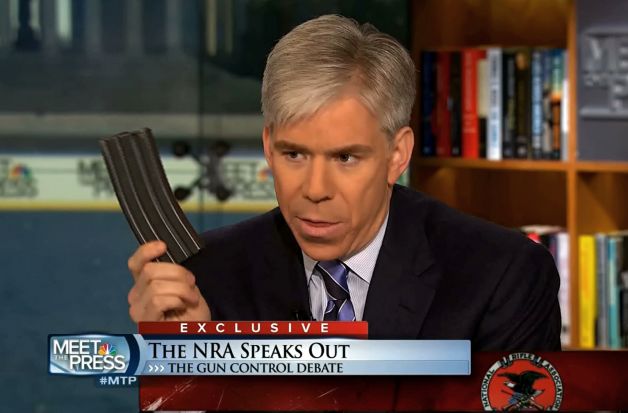 Prosecutors in our nation’s capital have just announced that David Gregory—the NBC News Meet the Press host who waved a 30-round magazine (illegal in D.C.) around the set like it was just an empty metal box—is getting off scott free. According to a statement by the city’s office of Attorney General . . . .

…criminal charges wouldn’t serve the public’s best interests even though possession of the magazine — capable of holding up to 30 rounds of ammunition — was clearly against the law. In a letter to NBC’s lawyer, D.C. Attorney General Irvin Nathan also said he recognized that the device was intended as a prop to provoke public discussion on gun control following the Connecticut school massacre.

The DC Attorney General’s office ‘splained their reasoning this way:

Influencing our judgment in this case, among other things, is our recognition that the intent of the temporary possession and short display of the magazine was to promote the First Amendment purpose of informing an ongoing public debate about firearms policy in the United States, especially while this subject was foremost in the minds of the public.

There seems to be some dispute whether the DC Police gave Mr. Gregory permission to brandish the assault clip on national television. Whatever. His actions were clearly against District law. Gregory had a point to illustrate and it was all for the good of the people, don’t you see. Keep that in mind when the government argues that your “high capacity” magazines are a threat to public safety.