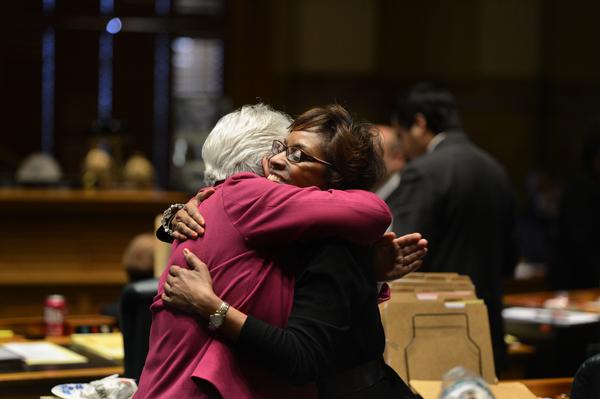 The Democrat-controlled (37-28) Colorado House of Representatives had four gun control bills on its docket for final passage today. HB 1229 requires universal background checks. HB1226 revokes campus carry. HB 1228 passes the cost of running CBI background checks on to prospective gun buyers and HB1224 would limit magazine capacity to 15 rounds. Given the heavy Dem majority, no one expected any of the four civilian disarmament bills to be defeated and no one’s expectations were dashed. All four were approved with varying numbers of Dem defectors voting no . . .

But all four attracted enough hard-line votes to pass. Typical of the thinking among the Centennial state civilian disarmers was this comment, reported by denverpost.com, on outlawing campus carry:

“There are a lot of students who simply are not ready to be in the presence of firearms,” said Rep. Claire Levy, D-Boulder, the sponsor of the bill. “It’s a dangerous mix.”

The campus carry ban passed 34-31. Charging gun buyers between $5 and $12 for CBI background checks made it by a slim 33-32 margin. Universal background checks proved more popular, causing only one Democrat to vote no. That bill passed 36-29.

Finally, the House also passed the  magazine limit bill, 34-31. Magpul has threatened to move its large and growing operation out of Colorado if the bill becomes law. All four bills will now move onto the Democrat-controlled Senate where they’re expected to pass.

Governor John Hickenlooper has expressed support for universal background checks, charging gun buyers and magazine capacity limits. He’s waffled on the campus carry ban, but look for him to go four for four when the bills hit his desk. Let the bidding among free states to be Magpul’s new home begin.