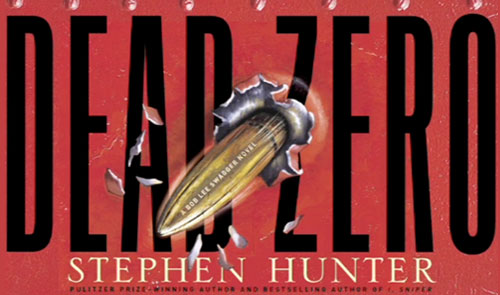 WARNING: this book review of Dead Zero by Stephen Hunter contains strong opinions, spoilers, and psychological nudity. If you are a die-hard Hunter fan and are looking forward to reading Dead Zero, do NOT read beyond the break.

Of course, I borrow the term “psychological nudity” from controversial radio talk show host Michael Savage. That’s appropriate because the plot for Dead Zero, Hunter confesses, was lifted from the 1976 book Death of a Thin-skinned Animal by British author Patrick Alexander.

There’s nothing wrong with that. After all, movie maker George Lucas admits that his Star Wars franchise began as a sci-fi retelling of Akira Kurosawa’s 1958 samurai warrior flick, The Hidden Fortress. It’s all in the execution. Or lack thereof.

And like Star Wars, the sniper heroes of Dead Zero are seemingly mystical Jedi-like warriors that wield their rifles like mighty penises – I mean, like light sabers [excusez-moi].

Before embarking on his current profession as a novelist, Hunter worked as a noted film critic. For that he won the 2003 Pulitzer Prize for Criticism. I believe I can safely say that he isn’t in the running for a 2011 Pulitzer Prize for Fiction for Dead Zero.

So let’s get down to business. Dead Zero is Hunter’s sixteenth novel and the seventh to feature super sniper Bob Lee Swagger. The first Swagger novel, Point of Impact, was adapted into the 2007 movie Shooter, starring Mark Wahlberg as Bob Lee Swagger.

In a nutshell, in Dead Zero Swagger is recruited out of retirement to help the FBI and CIA track down an USMC sniper named Ray “Cruz Missile” Cruz. Cruz went rogue after his unit was ambushed in Afghanistan by a team of mercenaries (ala Blackwater USA). The pursuit continues to America where Swagger attempts to contact and bring Cruz in before the mercenaries kill him. Meanwhile, Cruz intends to find out why someone in the government – probably within the CIA – wants him dead.

Wahlberg would not be able to play the Swagger of Dead Zero, because in this book he is retired and well into his sixties. Instead, Hunter characterizes Swagger as looking like current day Clint Eastwood – an impressive man whose physical prime is well behind him.

In fact, Hunter compares numerous of his characters to real actors or characters in films. One, nicknamed “Starling” is said to look, walk and talk like Jodie Foster’s Oscar winning character in Silence of the Lambs. Others are compared to Chow-Yun Fat (think tough guy cop roles such as The Replacement Killers, not Crouching Tiger, Hidden Dragon) and Omar Sharif in Dr. Zhivago.

Comparing writers this way is a crutch; a cheap literary shortcut. Reliance on pop culture movie references as character profiles is lazy writing. A novel is not a movie. The beauty of books is that you can paint complex multidimensional portraits of people in ways that motion pictures can only scratch the surface. It is the power of the medium. Not to do so is an opportunity missed.

By the end of the book I wanted to scold Hunter, like a parent to a crying three year-old, “Stephen, use your words.”

Hunter describes a recurrent female character as “beautiful” in at least seven different scenes throughout the book. Man has spoken adoringly of women far longer than language has been written. It seems we cannot help ourselves. Poets and lyricists, letter writers and playwrights, emailers and tweeters, and, yes, even thriller novelists, have found romantic and creative ways to admire these amazing creatures that we are privileged to live among and love. Yet, Hunter can’t think to use more than one word.

Stephen, use your words.

Otherwise, the characters are flat and uninteresting. In the spirit of comparing characters to movie actors, let me say that every bad guy in this book is reminiscent of John Kreese – a name I’m sure that few of you know, but all of you will remember as the gung ho Cobra Kai Sensei from The Karate Kid movies (played by Martin Kove).

Nonetheless, I found the thriller plot enjoyable – until it took a laughable Luke Skywalker / Darth Vader turn. The revelation involves coincidence that is more tortured than a radical GTMO detainee.

Perhaps the most enjoyable dialog of the book is between two terrorists, an Indian and an Egyptian, who are smuggled into the States from Mexico. One is a fundamentalist true-believer and the other is an atheist who wishes to destroy America purely for political reasons. The two paint a stark contrast against a middle-America backdrop. Their conversations are insightful, clever, and often humorous.

Gun aficionados will appreciate the accuracy of the firearms that are featured prominently throughout the book – from the .380 Ruger LCP that a terrorist keeps Velcro-strapped to his wrist inside his shirt sleeve, to the awesome power of the .50 Barrett M107. For example, this two paragraph description of the fictitious Colonel Norman S. Chambers:

That name was familiar, and so Swagger did a quick Google on Chambers. What he learned provoked him: Apostate! Heretic! Defier! Enemy of the Jesuitical code of the Marine Corps Sniper Program! Chambers actually had not come out of the program at all. Instead he’d been straight infantry with time at the Command and Staff School at Leavenworth; he was a combat leader, not a sniper acolyte, which meant he wasn’t bent double under its doctrine. He was the critical outlier, the Billy Mitchell of sniping, who felt free to scorn the doctrinaires, at the same time risking the reputation of bitter wannabe, failure, whatever. Among his apostasies: he hated the M14 and thought the idea of welding up the old battle horse of the early sixties into a sniper rifle for the war on terror was a waste of time. He had been right on that one, and the corps, though it dug a great many of the old beauties out of mothballs for accurizing and scope fitting at the dawn of the war, soon learned the hard way that the zero on such a jerry-built assemblage would go wrong, and would never consistently deliver the accuracy at long range that would justify the careful and expensive training a sniper would get. Chambers also saw the M40 system—an iteration of the Army’s M24 system, which was a highly accurized Model 700 Remington with a Kreiger barrel and Schmidt & Bender or U.S. Optics on top – as stopgap at best.

Chambers was an exponent, outspoken and sometimes brutal and mocking, of the SASS, or semiautomatic sniper system. His weapon of choice for general issue to marine sniper teams was the Knight’s Armament SR-25, as derived from the original ArmaLite AR-10. In fact, both the SR-25 and the common infantryman’s M16/M4 rifles had common ancestry in the AR-10, which, designed in the late fifties by Eugene Stoner and some aerospace hotshots at Fairchild Aircraft, had seemed like some kind of plastic ray gun from outer space. But its profile—the straight-line design, the rakish pistol grip, the magazine well just forward of it, the need for high sights either optical or concealed in a carrying-handle assembly, plastic foregrip with ventilations, triangular front sight and flash hider at the muzzle—had become the basis of the Western combat small arm of the last half of the twentieth century. Chambers pushed hard for the adoption of SR-25, once it had been proven in competition, courtesy of the Army Marksmanship Unit in the nineties, signifying that a semiauto or full-auto weapon was cable of the accuracy a bolt gun routinely produced.

The tempo of the book is brisk and the action sequences are well done. Hunter proves his craft in a climatic shootout in downtown Washington D.C. that Hunter tells us unfolds like a scene from Heat, The Wild Bunch, and The Dogs of War. Despite yet another movie-reference literary crutch (Stephen, use your words!), the scene is an epic shootout that almost makes the rest of the book worth reading.

[Simon & Schuster provided a copy of Dead Zero for this review.]