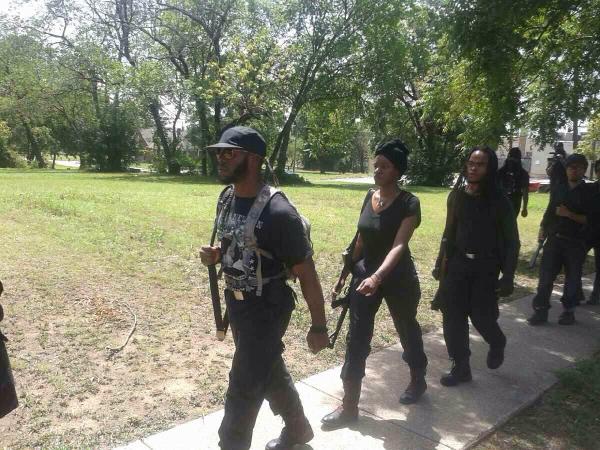 “‘Whites walking down Main Street with an AK-47 are defenders of American values; a black man doing the same thing is Public Enemy No. 1,’ says Gallagher, a professor at La Salle University in Pennsylvania.” That’s the considered assessment of race relations in America accruing to La Salle Univerity sociologist Charles Gallagher. Fortunately, we know that Gallagher is wrong. See the picture above?  It was taken in August of this year. Those are members of the Huey P. Newton Gun Club who went to a restaurant and ate while openly carrying their guns… next to a group of police officers. Nothing happened . . .

Not exactly what you would expect if a group of public enemies no. 1 sat down in a restaurant with a group of police officers.

Gallagher doesn’t say that white people buy guns because of overt racism, but that’s the implication. He credits a cultural stereotype.

Gallagher says he’s not accusing every white person who buys a gun of being a racist; he’s accusing them of being human, of unconsciously absorbing stereotypical attitudes about black men and violence that are as old as America itself.

This, in spite of massive collusion in the old media to downplay black-on-black in crime, decades old pressure in the entertainment media not to portray black people as criminals, and the strong overportraying of white men in movies as the most common violent criminals. From the AP stylebook:

A few sensible rules should guide our decisions concerning references to race: (1) Racial identification should not be included in any story unless such reference is clearly relevant to the story or when part of a detailed description of a fugitive.

Downplaying black predominance in crime is so prevalent that most people in urban areas now assume that if the race of the perpetrator is not mentioned, they are black.  It is an open joke. The AP’s attempt to avoid perpetuating a stereotype has become emblematic of social engineering by the old media. It may have some effect, but reality overrides it.

Open carry groups — whatever the color of the carriers — in Texas are found all over the state. Open carry is virtually synonymous with strong, symbolic, protected political speech.  Such is the case whether the marchers are black gun clubs in Texas or mostly white open carry parades in rural Colorado. Open carry is becoming more and more accepted as a way of expressing First and Second Amendment rights.