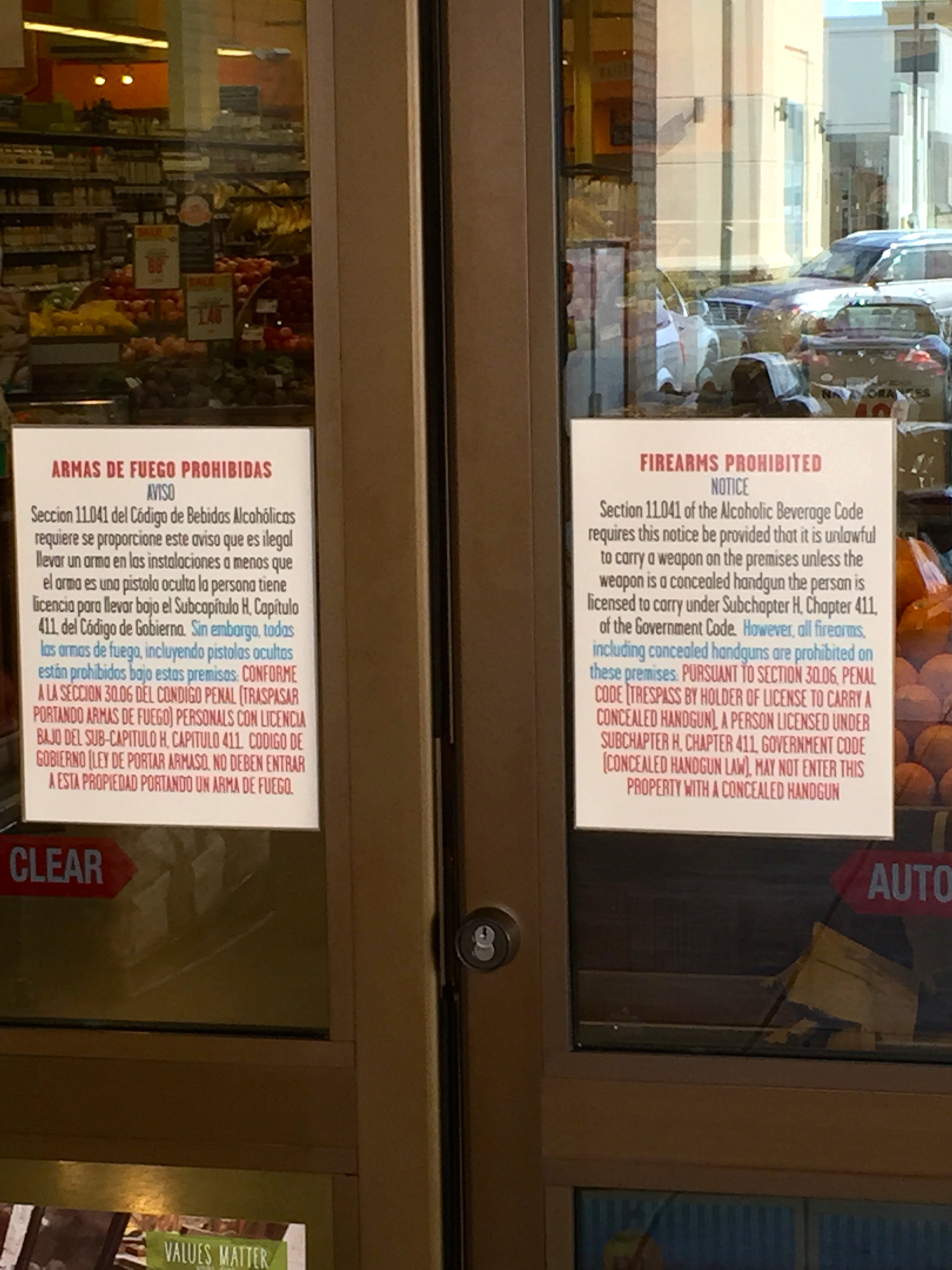 Returning from the Sin City SHOT Show, looking to re-stock my radicchio supply, I was waylaid by this pair of signs at my local Whole Foods. I immediately realized the letters aren’t big enough for a Texas-legal 30.06 sign (1″ tall by law). And what was all that other text? 30.06 signs are supposed to have the required wording – and nothing else. Unfortunately, the signs are posted on automatic doors that slide open at the mere thought of a customer. I had to step back, wait for the foot traffic to disappear, snap the photo, enlarge it and read the text. Here’s what it says . . .

Section  11.0412 of the Alcoholic Beverage Code requires this notice be provided that it is unlawful to carry a weapon on the premises unless the weapon is a concealed handgun the person is licensed to carry under Subchapter H. Chapter 411 of the government code. However all firearms including concealed handguns are prohibited on these premises. PURSUANT TO SECTION 30.06, PENAL CODE [TRESPASS BY HOLDER OF LICENSE TO CARRY A CONCEALED HANDGUN], A PERSON LICENSED UNDER SUBCHAPTER H, CHAPTER 411, GOVERNMENT CODE [CONCEALED HANDGUN], MAY NOT ENTER THIS PROPERTY WITH A CONCEALED HANDGUN.

I wonder if you could appeal an arrest for refusing to leave Whole Foods with a legally concealed handgun on the basis that the market’s 30.06 sign uses brackets instead of parenthesis.

But I bet you could make a case that (again) the letters are too small and the sign confusing. You’re good to carry – except you aren’t. Clear as mud. And hard to read as it swishes out of view in less than a second.

Typical. The anti-gunners at Whole Foods couldn’t get the details right. Goes with the territory I suppose. I mean, if antis looked at the details of concealed carry they’d see that “allowing” Americans to exercise their natural, civil and Constitutionally protected right to keep and bear arms on [unguarded, cash-rich] premises is [free] common sense crime control.

Nope. They’d rather plug their ears, close their eyes and pretend that nothing bad will come of their “gun-free zone” policy. Which is perfectly true – right until it isn’t.