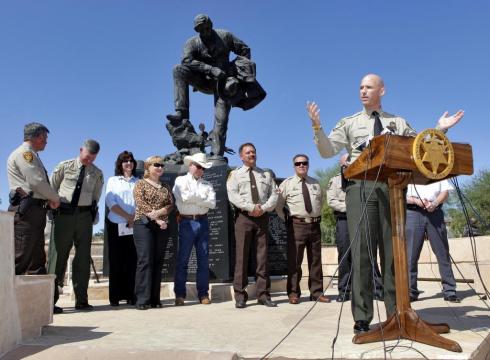 The Sheriffs in Arizona may be getting shot at with Fast n’ Furious guns, but they are not taking it lightly. In fact, the sheriffs are shooting back, at the Obama Administration. Per USA Today:

A majority of Arizona’s county sheriffs on Friday called upon President Obama to appoint an independent counsel to investigate the government’s botched gun-smuggling case know ans Operation Fast and Furious.

At a Phoenix news conference, Pinal County Sheriff Paul Babeau said the sting operation, which allowed an estimated 2,000 firearms to reach narcotics cartels in Mexico, was a betrayal that should lead to the removal of Attorney General Eric Holder and possible criminal charges against those responsible.

Wow. Nothing like getting straight to the point, eh? But Babeau wasn’t done. The president of the Arizona Sheriff’s Association said:

“I believe that this is a much larger scandal than what took place in Watergate.”

“The fact that he knew about this before the murder of Agent Terry should haunt him. Eric Holder, in my opinion, should resign or he needs to be fired…Nobody in America is above the law, including Eric Holder, including President Obama. There is no king,” said Babeau.

Ten out of 15 sheriffs, including both Democrats and Republicans, joined in the call for the appointment of an independent counsel.

Sheriff Larry Dever of Cochise County asked “Who really is responsible for helping to arm the people we are fighting every day on the border?” Sheriff Tom Sheahan, of Mohave County added, “I feel like we’ve been betrayed by our government.”

Well that gets a big 10-4 from this side of the Interwebz, good buddy. And Larry, the answer to your question is, obviously, The Bureau of Alcohol, Tobacco and Firearms, complicit cooperation, logistics, management, and assistance from the FBI, the CIA, the State Department, the Department of Homeland Security, ICE, USBP, and the Justice Department, including Eric Holder.

Rereading the poison pen prose from the petulant Pashas of the Justice Department (saythat five times, fast), he slipped a little something in there that bears examination. And I quote:

As I have said, the fact that even a single gun was not interdicted in this operation and found its way to Mexico is unacceptable. Equally unacceptable, however, is the fact that too many in Congress are opposed to any discussion of fixing loopholes in our laws that facilitate the staggering flow of guns each year across our border to the south.” (sic)

Maybe it’s just we’ve heard this same crap so often from the Obamateurs, that we tune it out. But the fact that Holder equivocated not interdicting guns (at all) with the intransigence of Congress in “fixing” gun “loopholes” is, in point of fact, telling.

We’ve got a multiplicity of scenarios that we can choose from, as to the Stanislavsky(ish) question, “What’s their motivation?”

What’s the truth? Like the masochist said to the sadist, Beats me?! But that’s what special prosecutor investigations are for – to get to the truth, if at all possible.

I’m not a member of the Tribe, but Yiddish words are frequently so much more descriptive than plain old English. Chutzpah is such a word. Essentially, it refers to one who has overstepped his bounds in a brash and arrogant way. Balls of Brass, if you will, but it’s more about bravado and a willingness to ignore facts, the truth, and brazen their way through.

Eric Holder is the poster child for Chutzpah.

This letter of his is a textbook attempt to divert blame and attention. But I think he reveals a lot about their agenda in that paragraph. It’s all theatre. And like a radical from a generation prior, apparently they will go after their goals, by any means necessary. Let’s just hope we can get to the bottom of this mess before another drug thug gets to say “I shot the Sheriff.”