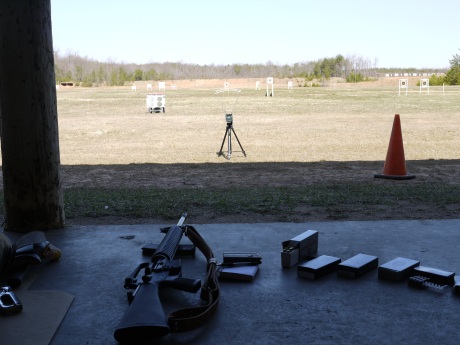 You can be the best shooter in the world and have the most accurate rifle known to man, but if your ammunition is inconsistent you’re still going to suck. From High Power Rifle all the way down to 3-gun and USPSA, when centimeters matter you have to know that you can trust your ammo. But which brands are really the best?

Just about every brand of ammunition these days has a “match grade” line boasting improved consistency for the precision shooter. Starting today and continuing until we run out of brands to test, I will be putting every box of match grade ammunition I can find to the test and keeping a running tally of which brand will give you the best consistency.

When we talk about consistency in ammunition we’re really talking about speed. Three factors most affect the speed of the round: bullet weight, powder charge, and barrel length.

The only truly objective method of testing ammunition consistency is using a chronograph and measuring the speed of the bullets as they exit the barrel. Even if we were to strap a rifle to a slab of concrete so it doesn’t move, fire the test rounds and examine the resulting target, any variation in the group size might be due to barrel imperfections instead of issues with the ammunition. Therefore we will use bullet speed as the yardstick against which we will measure these rounds.

Using a National Match Service Rifle style AR with a 20 inch barrel and 1:8 twist rifling, I fired 10 rounds of each brand of ammunition from the prone position over a chronograph situated exactly 12 feet from the end of the muzzle. I recorded the velocity of each round as reported by the chronograph.

To create useful data charts, all velocities were “normalized.” I found the average velocity of the 10-round string of shots, and then subtracted from each of the recorded velocities. This yielded a set of numbers, some positive and some negative, with the mean being zero. I then analyzed the normalized plots.

To compare the ammunition, the interquartile range or “IQR” will be determined. IQR is established by figuring-out which two velocities 50% of the rounds fall between, and then determining the distance between those velocities. The IQR will be the value by which the ammunition brands are ranked.

Wilson Combat donated two boxes of their match grade ammunition as well as two boxes of other brands for the test, and I threw in a box of Wolf and a box of my own handloads.

The non-normalized results were somewhat confusing. 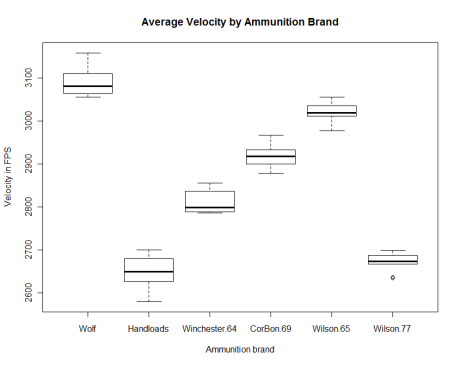 However, the normalized results were much easier to understand. 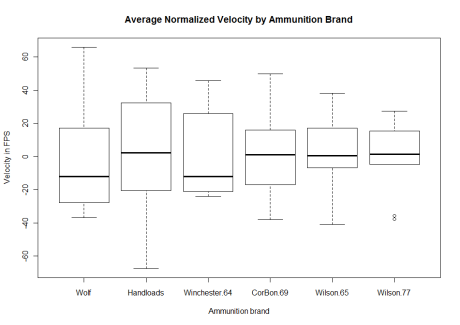 In terms of the data points being “normally distributed” the handloads and the CorBon 69gr rounds are the closest, but most of the ammo appears to be forming a nice, normal distribution around the mean. The only ammo that worries me is the Winchester 64gr ammo, which has a distribution skewed more towards the lower end of the spectrum. Further testing should be conducted to see if this type of skew is typical in Winchester ammunition and to ensure that the results provided by this sample of 10 rounds properly represents the ammunition produced by Winchester. 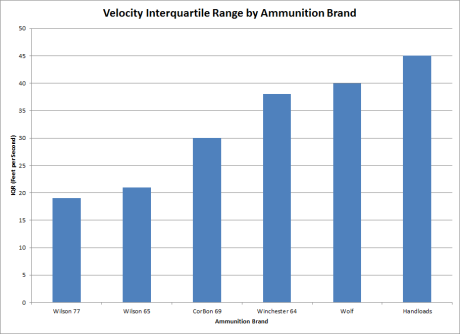 The IQR really says it all (smaller is better). In terms of consistency, currently Wilson Combat takes the prize. But with more ammunition on the way, can Wilson Combat stay on top? Just how good is that Hornaday match grade stuff? Will Foghorn stop asking leading questions?

Tune in next time to find out.