Winchester Ammunition has expanded their line of premium self-defense ammunition known as “PDX1 Defender.” The newest caliber: 7.62×39mm. It’s a great addition to the product line, since there’s little widely available premium ammo for this workhorse commie caliber. Hornady’s 123 grain Z-Max is the only direct competition that comes to mind. Although more of a specialty round, Winchester’s new Razorback XT round is also worthy of mention as a premium hunting round. But where the Razorback features a solid, lead-free bullet optimized for thick-skinned ungulates such as Sus scrofa, the PDX1 is designed to expand more rapidly, presumably in bipedal vermin of the homo-sapiens or homo neanderthalensis variety. Don’t laugh – there are definitely some of those Neanderthals still running around  – I’ve met a few personally . . .

The new PDX1 bullet uses Winchester’s split-core technology (SCT). SCT is a bullet-making process designed to optimize the bullet’s terminal expansion effects by varying the way the lead core bonds with the outer jacket. The rear 2/3rds (or so) of the lead alloy core is electro chemically bonded to the copper alloy jacket, but the front 1/3 portion is not. The “welded” rear core allows the bullet to retain its structural integrity as it passes through soft tissue and bone, ensuring good penetration. By not bonding the front portion of the core, Winchester’s design allows the bullet to rapidly expand upon impact.

Thus, the PDX1 bullet will mushroom in similar manner to a soft point, but without the attendant reliability or feeding problems associated with using soft points in a semi-auto rifle. The protected hollow point promotes sure feeding and initiates quick expansion. The PDX1 sports a 120 grain bullet rated at 2365 fps. That equates to 1490 ft-lbs of energy at the muzzle with a ballistic coefficient of .0248. Table 1 reproduces the ballistics table found on the packaging for this new round: I fired a total of 100 rounds of the PDX 1 ammunition.  I fired 40 rounds for accuracy and chrono results, and another 40 rounds for reliability in a variety of weapons that I knew had a history of running smoothly with FMJ ammo.  I used the final twenty rounds to experiment on a variety of media to test expansion and penetration.

First, I placed 10 rounds in the magazines of each of the four rifles and shot them as fast as I could pull the trigger.   This testing was done right at twilight so that the low flash powder could be tested as well.  The Winchester PDX 1 cycled reliability in all four rifles.  There was no noticeable difference in recoil when compared to other commercially available rounds.  The low flash powder did result in noticeably less visible flash, esp. out of the Vz 58.  Flash was still noticeable out of the 12 inch barreled AMD-65, but it was noticeably less than the fireball created by Wolf, Tulammo, and Yugo Surplus ball.

My chrono testing consisted of two separate shooting sessions wherein 5 rounds were fired from each of four different rifles, for a total of 40 rounds.  I recognize that this is a small statistical sample, but my results were consistent so I have fair degree of confidence in the data.  My testing revealed the following ballistic results:

I found that Winchester PDX 1 met or exceeded the advertised 2365 f/s from an SKS design with a 22 inch barrel. Winchester doesn’t say on the packaging how long of a barrel was used to get their 2365 f/s figure, but based on my testing, I suspect that it’s a 20 inch barrel. Velocity naturally dropped with the shorter-barreled rifles. 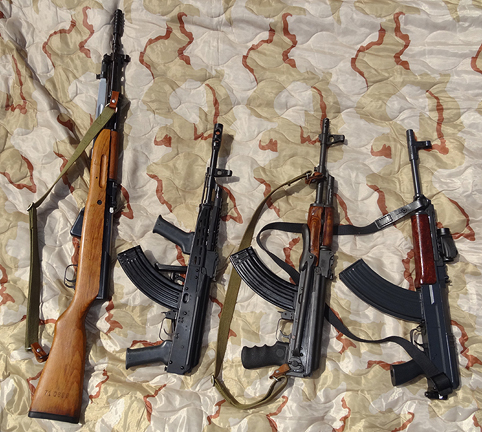 I found a surprising correlation between the length of the barrels and accuracy: the shorter the barrel, the better accuracy. I’m not willing to draw any scientifically relevant conclusions from my testing concerning barrel length and accuracy, though. Based on prior testing, I’m of the opinion that this particular YUGO 59/66 is inherently less accurate than the other rifles I used in the test despite its “like new” condition.  Conversely, my prior testing with the FEG AMD-65 revealed it to be an unusually accurate sample. The other two rifles produced results in an expected range, and any variations between the two is likely attributable to other factors, such as better trigger, better sights, etc.

I can say that, as you’d expect, the Winchester consistently outperformed Russian steel cased ammo, which usually fairs rather poorly in the accuracy department. I didn’t notice any significant difference in accuracy when comparing the Winchester PDX 1 to Winchester White Box, Hornady 123 Grain A-Max (steel case, Zombie box), Federal American Eagle, or Remington UMC. Overall, though, I thought the Winchester PDX was slightly more accurate that the other U.S. manufactured ammo.  Admittedly,  my statistical sample for comparison was rather small, and shooting non-scoped rifles tended to mask any differences. 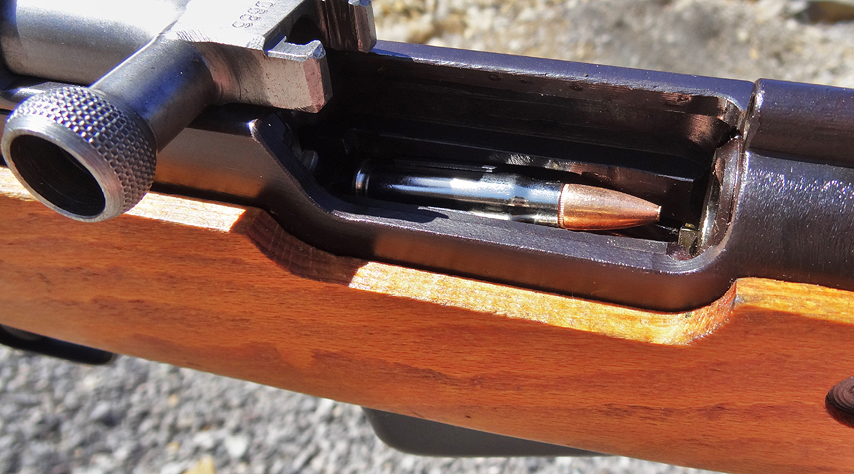 I was hoping to do some testing to determine if the PDX1 would have a noticeably different result on soft tissue at short (DGU) ranges, when compared to FMJ ammo. The 7.62 x 39 FMJ round has a reputation for relatively poor performance on soft tissue, making relatively small wound channels while traveling through 30(+) inches of ballistic gelatin. The PDX 1 ammo is intended to solve that problem, by giving the round the ability to mushroom quickly upon impact, thereby transferring more of its energy into the target.

Not having access to ballistic gelatin made that difficult. I had no prior experience testing ammo in this manner, so my perspective is strictly that of a consumer. Also, I had never shot an AK at any living animal so I also didn’t have any experience with the terminal effects of the 7.62 x 39 round. I have been on the receiving end of 7.62 x 39 rounds fired from long range, but fortunately, the bad guys missed.

We set up the hams on a table and shot them with the Yugo 55/66 at 15 yards.  In both cases, the bullets shredded bone and exited through the meat, making bullet recovery impossible.  The video reveals that the PDX 1 reacted much more violently upon impact compared to Wolf 123 grain FMJ.

While certainly not scientific, it’s clear that the PDX1 ammo transferred more energy to the meat, as evidenced by the fact that it blew the pork off the table and made smaller chunks that flew 10-20 feet through the air. The FMJ round, on the hand, split the ham in two but left considerable pieces behind.

The PDX 1 also completely obliterated a 1 gallon jug of water and a 15 inch diameter watermelon.  The watermelon was blown into so many pieces that none were bigger than 2 x 3 inches or so. In fact, to my disappointment there was no part of the watermelon left that was even “edible,” as the insides were basically liquefied.

I think more detailed testing is definitely needed to conclusively determine the extent of the difference between PDX1 and FMJ. That being the case, I hope to fly down to Texas sometime soon to reduce the feral hog population with both Winchester PDX1 and Razorback ammo.

After shooting 100 rounds of this pricy ammo ($30 for 20 cartridges), it’s obvious that this is very high quality fodder for your AK, Vz58, or SKS. Whether for hunting, self-defense, or TEOTWAWKI/STHF scenarios, folks seeking to maximize the effectiveness of their eastern bloc gun on soft tissue will likely find no better civilian-legal ammunition than the PDX1.

I must confess that I have some lingering doubts as to the necessity of an expanding rifle bullet for self-defense purposes at close range. For downing a deer or exploding woodchucks? Roger that, there’s none better. And the PDX1 would likely stand much less chance of passing through a human target than a FMJ round, which, in a home defense situation, is definitely a good thing.

But if over-penetration isn’t a concern, it seems that any 7.62 x 39mm ammo (FMJ, SP, etc.) would be plenty lethal at any reasonable self-defense ranges (10 meters or less). While it’s possible to envision some legitimate DGU scenarios where the engagement range might be 100 yards or more, that would be a rare encounter indeed. Viewed in this light, PDX1 might offer a “dead vs. deader” advantage; perhaps akin to the “11” setting on that dude’s amp in Spinal Tap. It does look awfully cool, though.

Price:    Expect this ammo to retail for somewhere in the neighborhood of $30 a box of 20.

This is top quality ammunition. PDX 1 will not only turn your AK in a good deer rifle out to 150-200 yards or so, depending on how comfortable you are making a clean kill at those ranges, but will be reliable for use as home defense ammo, should you be so inclined.  While I suspect that the any 7.62 x 39 FMJ round will reliably get the job done in a DGU situation, the low flash powder alone makes this ammo the logical choice for night encounters.