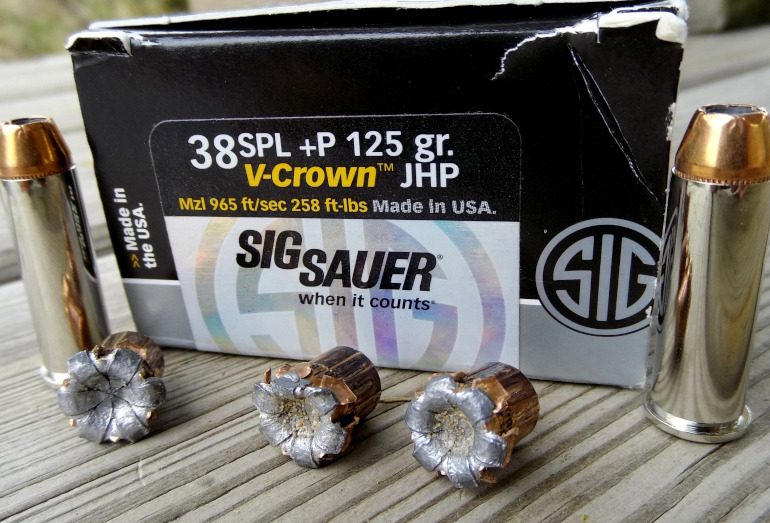 SIG SAUER, as everyone should know by now, has been and is continuing to release a variety of ammunition types, which include everything from pistol to rifle and practice ball to advanced copper hunting bullets. In this article we will be looking at the excellent .38 Special +P 125gr +P Elite V-Crown. General Background
The SIG V-Crown bullet used in this load is a traditional-style jacketed hollowpoint without a polymer filler in the tip. SIG’s making a complete line of V-Crown ammo that includes 9mm, .45 ACP, .380 ACP, and .45 Colt, among others.

The load itself consists of a 125gr bullet and a nickel-plated case. The ammunition comes in boxes of 20 rounds and retail MSRP is $19.99 on the SIG website as of this writing, although street price for a box is typically a couple of dollars less.

Accuracy and Basic Performance
I tested this load in my classic Smith & Wesson Model 36. The pistol was made in 1975 and features a pinned barrel and fixed firing pin. It’s an amazingly smooth gun that is probably the most accurate small revolver I’ve ever shot.

Some people told me not to fire +P in this gun, but yesteryear’s .38 Special ammo was generally much hotter than we have today and this heavy, steel-framed gun has no issues with +P loads. The accuracy I was able to squeeze out of my Model 36 was excellent. I fired the pistol at a distance of ten yards from a standing position and was able to easily print one-inch groups. Backing off to 25 yards, I was able to keep all my shots on my 10” steel plate by holding at six-o-clock from the little snubby.

In the course of my testing with this cartridge, I experienced no failures to fire. Cases ejected easily and the primers showed no signs of pressure. SIG Rates the round at 900fps. Velocity chronographed at a distance of five feet from the muzzle was 805fps for an average of five shots. That difference isn’t unusual given the Model 36’s two-inch barrel.

Ballistic Performance
I received a 10% FBI gel block from Clear Ballistics for this section of my testing. The SIG load was fired from my Model 36 at a range of ten yards. The bullets fired into bare gel penetrated the gel to an average depth of 15”, but I did have some pass fully through after expanding. I found a number on the ground immediately behind the gel.

The bullets showed no hesitance to go through fabric and leather. In fact, there seemed to be very little deflection when going through the materials. The bullets still reliably expanded, but I noticed some tumbling. Interestingly enough, a significant number still passed completely through the gel and again fell on the ground just behind my testing setup. The penetration this load achieved was reliable and consistent, but I believe that the bullets were probably a bit too hard for their own good. I would love to see the same bullet used in the 365 ammo line used in this load. I think that it would be a perfect balance of speed and expansion.

Wounding Capacity
The wound channels generated by this load were very consistent, deep, and straight. The expansion of soft tissue happened quite quickly in the first three to four inches, but the permanent wound channel wasn’t especially wide over the course of the wound length.

Average permanent cavity width was about .44”. The remaining wound channel wasn’t spectacular, but the penetration was there as well as the expansion. 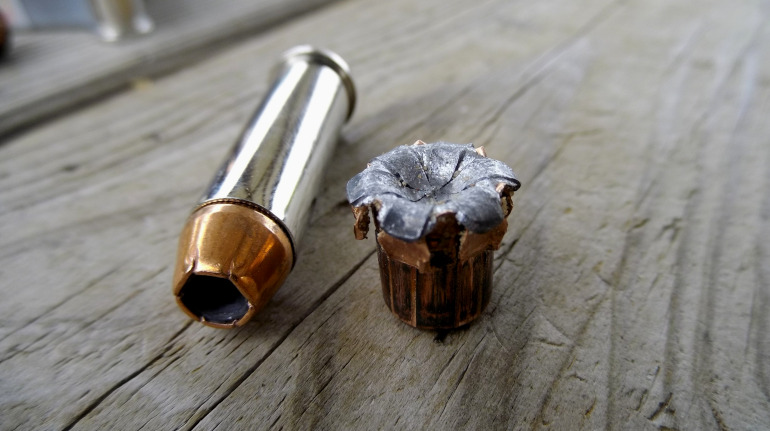 When shooting through fabric and leather, there was no change to the overall performance. Bullets still expanded reliably and penetration was deep. The only major difference was some yaw and tumbling. These occurred with some regularity, but were not consistent. Tumbled bullets were recovered at a depth of 12-15”.

Overall Impressions
This load is accurate, powerful, and reliable. It’s a solid choice for anyone looking for effective personal defense ammo. As a bonus, SIG also makes a matching and less expensive FMJ version of this load to practice with. If a person wanted to go with one brand and style to carry and take to the range, SIG is a great option. I think that SIG would be very successful with a dedicated snub-nose load that’s meant for small guns. This is an ammo that has ample power and penetration, but it may be too stout for some carriers.

I like that it can go through virtually all clothing and still expand, but the deep, driving penetration after expansion is something that people may want to be aware of.

Accuracy: * * * * *
This load produced stellar accuracy, particularly from a snubby. It’s easily on par or better than most .38 personal defense ammo out there.

Handling: * * * * *
Recoil was much lower than some .38 +P I’ve used over the years. I hesitate to even call it a +P load as it’s still well within standard .38 velocity and recoil expectations. I had no problem staying on target for follow-ups while firing double-action.

Reliability: * * * * *
Perfect. I experienced no problems of any kind while shooting this load.

Terminal Performance: * * * *
For a carry round, this could’ve expanded a bit more and stopped just a couple of inches shorter in the gel. the occasional over-penetration should be noted. That said, it does have what lots of carry ammo lacks in that it has very reliable and deep penetration after expansion.

Overall: * * * *
SIG’s 125gr V-Crown +P is a very good, reliable personal defense load. I’ve confidently carried it in several of my J-Frames and I like that it has a practice clone load as well.