Now that we know what rifle the Army has selected to replace the M4 for troops in combat roles, February’s news that Vortex won the XM157 NGSW Fire Control System competition makes a lot more sense. When I first heard “fire control system,” I thought they were talking about the trigger mechanism (fire control group) or maybe a lower receiver design, but that’s not at all what the XM157 is at all. It’s a revolutionary smart optic and communication system that will greatly lower the skill needed to get the most out of the XM5 rifle and the 6.8x51mm hybrid round.

Vortex is understandably proud of their work, and gave the public a nice deep dive on the winning optic system a couple of months ago . . .

The Biggest Problem With Smart Optics

One of the biggest reasons to avoid “smart optics” in the past has been that they’re based on an electronic display. If something goes wrong with the camera or the electronics, or if the battery goes dead, you’ve got an expensive paperweight sitting atop your rifle. If you depend on your rifle to get you out of really crappy situations, you obviously don’t want to risk that happening if it’s at all avoidable.

Fortunately, Vortex thought about that and made sure to design an optic that’s actually an optic, not a digital screen. The “smart” parts only project information (including a self-adjusting reticle) onto a transparent display inside of a normal low-power 1-8×30 variable optic (LPVO) with an etched reticle. If the smart parts fail, a soldier can still use the XM157 like a normal optic and stay in the fight without needing to switch to irons.

Who’s Going To Get It?

It appears that all XM5 rifles will be equipped with this optic. Vortex has a contract for “up to 250,000 optics” which covers all of the “close combat” roles (anyone in line-of-sight of the enemy in a combat role, as they’re closer than artillery and support personnel are) that are going to be issued the new rifle.

While the XM157 next gen fire control system is designed to maximize the utility of the XM5 rifle. It’s programmable to adjust for the ballistics of different loads. That means that, as the Army and SIG SAUER come up with different loads for the weapon, the XM157’s computer can be updated to support them.

It also means that the optic can be used with any rifle, as long as there’s ballistics data for the rifle and rounds. So, at least some people using M4s, DM rifles, and other weapons could get this optic, too. 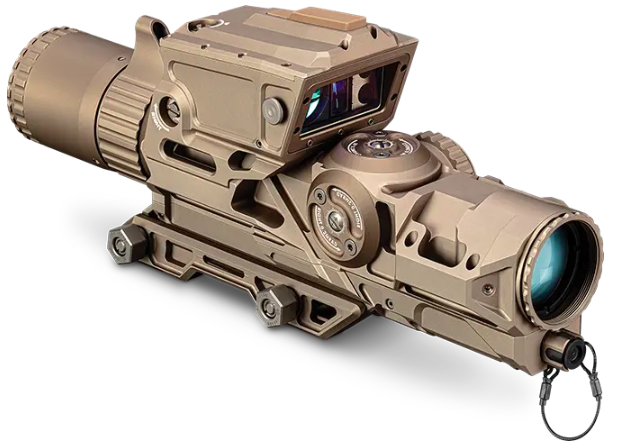 What about the rest of us? Vortex didn’t give any specific dates on when we could see a civilian version of the optic, but they did say that when they’ve gotten production to the point where it’s satisfying the military’s needs, that they want to start producing something similar for us. It obviously won’t have all of the capabilities described below (civilians wouldn’t use it all, and we wouldn’t want to pay dearly for things we don’t ever use), but it will still be a product many of us want for our own rifles.

What Makes The Optic Smart?

One thing that makes this optic really special is that it has a full display with pixels. It doesn’t just light up a few different spots to give different reticles. Where a pixel is lit up, you see something on top of the optical image from the scope. Where pixels aren’t lit up, you see right through the display. This gives the shooter a lot of options. Ballistic drop, wind holds, the range to the target (as detected by a built-in rangefinder), menus, augmented reality (including ability to tag objects and see what other soldiers have tagged), waypoints, and basically anything else that the Army wants it to display.

The optic will calculate and adjust for bullet drop, windage, angle, etc. The optic has a number of sensors, including a compass, atmospherics, and a laser rangefinder to get the data it needs to make ballistic calculations and move the digital reticle automatically in fractions of a second to make it a true point-and-shoot system. That means people with less skill can shoot faster and more accurately at the longer ranges the 6.8x51mm round has the energy to work well at. The optic also knows what zoom level the shooter is at and adjusts accordingly. If you quickly switch it to 1x for an unexpected close-quarters engagement, it automatically simplifies the feature set to give you a simple illuminated circle you’d want at close quarters. Zoom in, and it assumes you have more time to read and use more data, and it gives you that extra data. This makes it a true 0-1000+m optic.

The optic even has the ability to both set and check zero quickly. It shows point of aim, point of impact, and the ability to quickly adjust them to match without wasting a bunch of rounds checking the zero. Armorers will like that, but being able to run a diagnostic in the field is helpful, too.

Finally, it’s designed to be modular and upgradable. There are two attachment points: one where the existing laser rangefinder sits on top, and another one that’s reserved for future upgrades. With a software upgrade and new parts, the optic can serve soldiers far into the future.

Perhaps more importantly, the optic networks with not only other XM157 optics, but computers, smartphones, and even augmented reality visors the Army is developing. Data can potentially come from commanders, satellites, UAVs, and military aviators. It can also be sent to all of those other people who are also in the fight. This gives everyone rapid access to a common operating picture and sensor fusion data, much like the pilot of an F35 or F22 gets.

In the near future, soldiers will be able to look into their optic and see where friends and foes are, even around corners and through walls and terrain. In other words, it gives soldiers near superhuman abilities and sixth senses on the battlefield. Plus, all of that data gets put into the computer to help the soldier get even more accurate shot placement at long ranges.

But It’s Not Too Smart

They obviously can’t get into great detail, but Vortex says the user interface and ease of use was very important. Everyone who has actually handled an XM157 so far says that it’s easy to figure out and easy to get to work with. You don’t need to take a semester-long class to figure out the optic. Most people could look into it, read some basic instructions and be up and running pretty quickly.

The system was shown to a wide variety of military users to make sure that they could get into it and put it to work without getting lost in menus or getting stuck trying to climb an overly steep learning curve. It runs on the same easy-to-find CR123A batteries many other firearms accessories run on.

Perhaps most importantly, the XM157 isn’t heavy or fragile. While Vortex won’t give a specific weight, but it’s lighter than most other options currently in use. It’s also reportedly been tested in brutal environments and shown to survive all sorts of abuse. So, it’s not going to make a soldier’s job harder.