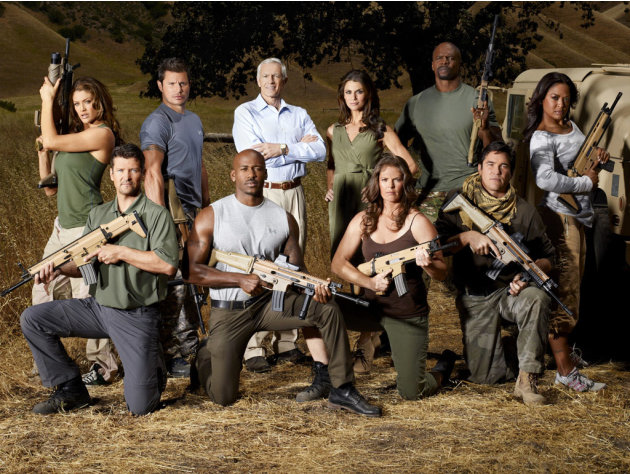 Combat is by all accounts terrifying, dangerous and exhausting. Shooting guns, riding in helicopters and blowing shit up is, on the other hand, fun. NBC’s “reality-based” miniseries Stars Earn Their Stripes gives a cast of actors and athletes a small taste of the rigors of (simulated) combat and a huge dose of the fun and excitement of making things explode. All the while kitting them out like the U.S. Navy DEVGRU and pairing them with professional uniformed operators. How great is that? That depends if you’ve won the Nobel Peace Prize or, as Farago likes to say, not . . .

Archbishop Desmond Tutu and the other Nobel laureates protested in an open letter that the show, “Stars Earn Stripes,” glorifies war and armed violence.

‘”It is our belief that this program pays homage to no one anywhere and continues and expands on an inglorious tradition of glorifying war and armed violence. Military training is not to be compared, subtly or otherwise, with athletic competition by showing commercials throughout the Olympics. Preparing for war is neither amusing nor entertaining.” . . .

To that end, the group’s implored NBC to pull “Stars Earn Stripes” from the air, calling it “a massive disservice to those who live and die in armed conflict and suffer its consequences long after the guns of war fall silent.”

In other words, the Net’s got the backs of reality TV maestro and Falklands War (3d Para) vet Mark Burnett and Dick Wolff of Law & Order fame—until and unless the program fails to make money.

SETS is set to run for one month. It will all be over by the time the fall TV season begins. We’ll have a review soon.

Meanwhile, we can tell you that all the celebs are predictably buff and and suitably amped. Some of them are overcome by the brotherhood and sisterhood of (simulated) arms—in that “the most important thing in show biz is sincerity; once you’ve learned to fake it you’ve got it made” kind of way.

To which the operators respond with restrained but genuine warmth.

They’re a collection of active and retired SEALs, Green Berets, Marines and Navy Corpsmen (and one civilian SWAT commander). And they’re all suitably badass. They get their jobs done with military efficiency, training up their celebrity recruits and avoiding unnecessary chatter while the cameras are running.

In short, SETS is a mud-stained, explosion-wracked and bullet-riddled Thank You letter to our men and women in uniform. This quiet efficiency probably drove the producers crazy, but it emphasizes the point that military service isn’t about stardom, it’s about service.

At one point in the premiere, a celebrity asks her military counterpart the completely inappropriate question. “Have you ever killed anybody?” The operator neither regales her with war stories or embarrasses her for the stupid question. He just shakes his head with disappointment and gives her the dignified answer, “We don’t talk about that.”

During the Olympics, touted as a time for comity and peace among nations, millions first learned that NBC would be premiering a new “reality” TV show. The commercials announcing “Stars Earn Stripes” were shown seemingly endlessly throughout the athletic competition, noting that its premier would be Monday, August 13, following the end of the Olympic games.

That might seem innocuous since spectacular, high budget sporting events of all types are regular venues for airing new products, televisions shows and movies. But “Stars Earn Stripes” is not just another reality show. Hosted by retired four-star general Wesley Clark, the program pairs minor celebrities with US military personnel and puts them through simulated military training, including some live fire drills and helicopter drops. The official NBC website for the show touts “the fast-paced competition” as “pay[ing] homage to the men and women who serve in the U.S. Armed Forces and our first-responder services.”

It is our belief that this program pays homage to no one anywhere and continues and expands on an inglorious tradition of glorifying war and armed violence. Military training is not to be compared, subtly or otherwise, with athletic competition by showing commercials throughout the Olympics. Preparing for war is neither amusing nor entertaining.

Real war is down in the dirt deadly. People—military and civilians—die in ways that are anything but entertaining. Communities and societies are ripped apart in armed conflict and the aftermath can be as deadly as the war itself as simmering animosities are unleashed in horrific spirals of violence. War, whether relatively short-lived or going on for decades as in too many parts of the world, leaves deep scars that can take generations to overcome – if ever.

Trying to somehow sanitize war by likening it to an athletic competition further calls into question the morality and ethics of linking the military anywhere with the entertainment industry in barely veiled efforts to make war and its multitudinous costs more palatable to the public.

The long history of collaboration between militaries and civilian media and entertainment—and not just in the United States—appears to be getting murkier and in many ways more threatening to efforts to resolve our common problems through nonviolent means. Active-duty soldiers already perform in Hollywood movies, “embedded” media ride with soldier in combat situations, and now NBC is working with the military to attempt to turn deadly military training into a sanitized “reality” TV show that reveals absolutely nothing of the reality of being a soldier in war or the consequences of war. What is next?

As people who have seen too many faces of armed conflict and violence and who have worked for decades to try to stop the seemingly unending march toward the increased militarization of societies and the desensitization of people to the realities and consequences of war, we add our voices and our support to those protesting “Stars Earn Stripes.” We too call upon NBC stop airing this program that pays homage to no one, and is a massive disservice to those who live and die in armed conflict and suffer its consequences long after the guns of war fall silent.