So the National Shooting Sports Foundation (NSSF) commissioned a poll to blunt the attack on Americans’ natural, civil and Constitutionally protected right to keep and bear arms. Specifically, the antis’ attempt to brand “gun violence” a “public health issue.” The NSSF commissioned Harper Polling – a Republican-favoring research company – to ask the question above: “Is Criminal Misuse of Firearms a Public Health Issue or a Criminal Justice Issue”? The NSSF’s touting the 84 percent “Criminal Justice” response as proof “they [the American public] don’t buy it.” But I’m not buying the “good news” the poll supposedly reveals . . .

For one thing, it’s a loaded question. The term “criminal misuse of firearms” supposes that the problem is a criminal justice problem. Criminal misuse = criminal justice. Even as worded, the result is not good for gun rights advocates. The fact that 12 percent of the 1055 likely voters interviewed by a Harper telephone operator went against the question’s obvious bias indicates that the “gun control as a public health initiative” has found fertile soil.

And how come this question doesn’t separate answers into “agree, strongly agree, disagree and strongly disagree”? I can only surmise that a lot of people who agreed that “criminal misuse of firearms” is a “criminal justice problem” did not do so strongly. The other poll results released by the NSSF do include these categories and, more appropriately, use the gun grabbers’ terminology. And what a difference a phrase makes. Notice that the number of people who strongly agree with the statement that government should classify gun violence as a public health issue is roughly the same as the number who strongly disagree. While the fence straddlers are on the side of government non-reclassification, that’s a whole hell of a lot of people who could be swayed in the antis’ direction. 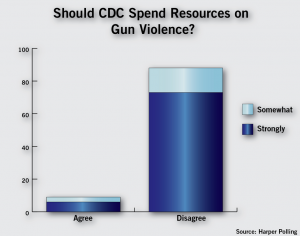 I’d like to take some comfort from this, the third poll answer released by the NSSF. But I highly doubt that more than 20 percent of Americans have the slightest idea what the CDC is. I suspect that Harper operators had a preamble to this question telling callers that the letters stand for the Centers for Disease Control and – maybe – an explanation of their mission. Which would skew the results.

In short, the enemies of Americans’ gun rights seem to made inroads with their “gun violence as a public health issue” obfuscation. Is that a problem? Only potentially. While the antis see this rhetorical sleight-of-hand as a way to push civilian disarmament in the interests of public safety, that Americans aren’t buying. When it comes to public health, all health is local. In other words, “gun violence” out there, somewhere, is one thing. Gun violence up close and personal is another.

And when it comes to that kind of gun violence – which is just another name for criminal violence – Americans are inoculating themselves against it by keeping and bearing arms. I refer you to an earlier poll by the far more dependable Gallup organization. In October 2013, Gallup released a poll that revealed Personal Safety Top Reason Americans Own Guns Today. As you can see, 60 percent of respondents listed “Personal Safety/Protection” as the primary reason their own guns. Would a significant percentage of Americans sacrifice their gun rights for public health? I don’t think so. Which means the NSSF poll is both more and less worrying than it seems. Not to coin a phrase, carry on.