If you’re shooting for fun, self-defense, hunting or training for one of those things, the experience is more enjoyable without pain. Whether you’re hoping to avoid pain or mix it with pleasure (not judging), here are five handguns guaranteed to hurt so good. . .

No surprise that a 0.666″-thick, 12-ounce gun firing .45 ACP would be unpleasant to shoot. But don’t forget to account for the flat-sided aluminum grip with a shape that drives recoil force into small pressure points. Shooting the DoubleTap feels like getting hit in the hand with a ball-peen hammer. It’s truly horrible to shoot.

S&W’s Model 360 PD is an AirLite revolver chambered for .357 Magnum. It weighs 11.7 ounces so it carries easy. But man it shoots hard. At 25 ounces the Model 329PD may sound more pleasant. Fire a heavy .44 Magnum through the gun and you’ll immediately want for mass and begrudge the pretty walnut grips. 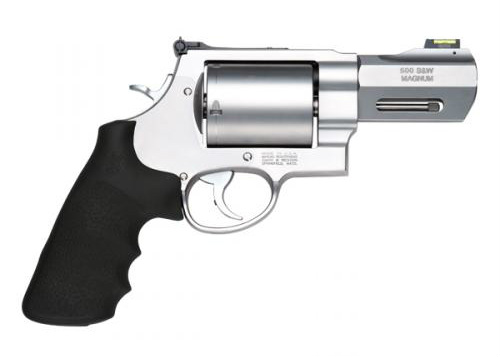 The .500 S&W is the most powerful production handgun cartridge on earth, capable of making over 2,800 ft-lbs of energy (that’s 12 gauge magnum slug energy) via up to 60,000 psi of chamber pressure. Heck, it can fire a 700-grain projectile at supersonic speeds out of a handgun-length barrel.

Assuming you keep your fingers out of the way of the cylinder gap, thereby not blowing any of them off, you still won’t beat the physics of this monster caliber’s brute force — even with a thick, soft grip installed on the frame. The S&W .500 hurts palms, it hurts wrists, it sometimes hurts faces.

The Thompson/Center T/C Contender Pistols aren’t usually painful to shoot; that depends on barrel and caliber choice. Should you outfit your pistol with a lightweight, pistol-length barrel in, say, .45-70 or .30-30, you’re sure to know you’ve fired it.

A powerful rifle caliber capable of dropping a buffalo dead in its tracks fired out of a handgun with a walnut grip? This is a recipe for pain. Could be Bond Arms, could be American Derringer, could be Heizer, Cimmaron, Inland Manufacturing or others. Doesn’t much matter who so much as what.

What caliber, that is. Little single- and two-shot derringers are available in calibers like .45-70, .45LC, .410 gauge, .44 Magnum/Special, and more, with unloaded gun weights as light as a barely-there 7.5 ounces.

Light weight and power? Sounds like fun . . . to watch someone else shoot one. With room for about 1.5 fingers on its teeny little [curved left] grip and an unloaded weight of only nine ounces, the Taurus 85VTA managed to turn shooting .38 Special into an act of self-flagellation. If it were still in production, it would have made the top five for sure.