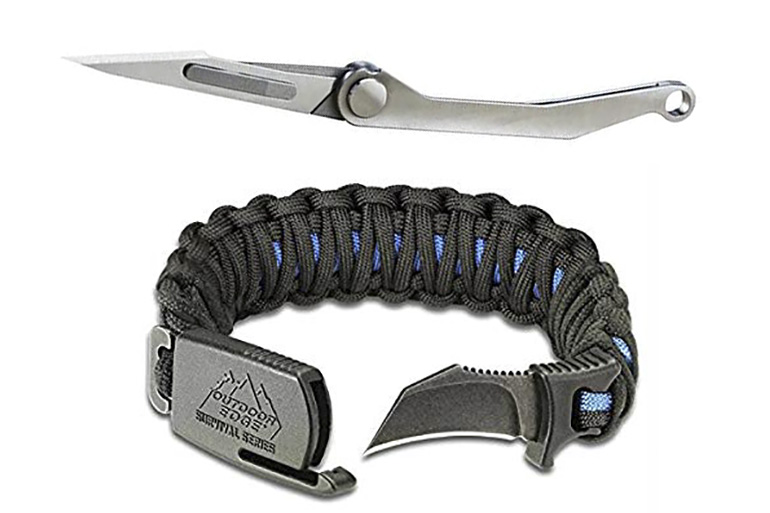 You can assume that if a knife can somehow be concealed in an otherwise unassuming pocket-sized object, someone’s selling it. By combining these remarkably sneaky knives, you could easily have upwards of ten separate blades on your person at all times. If you’re into that. Although some of the knives on this list are more like fun collectibles than legitimate tools, the knife makers at Gerber have put real thought into the stealth EDC knife concept. One of their coolest and most practical knives is a zipper pull (or keychain). For $15 and at the featherweight of .32oz, you get this extremely discreet .68-inch stainless steel utility blade. Not bad. Apparently, you can use this thing to get out of handcuffs, or for other miscellaneous emergency applications. Your mileage may vary. A keen-eyed fellow ‘operator’ will notice this is a knife, but it’ll fly under everyone else’s radar. A clever thing, especially for the millions of people who use a carabiner for keys anyway. If you’re going to be ‘that guy’ with the paracord bracelet, you might as well be this guy. Can you put enough knives on a keyring to make it qualify as a collection in itself? “Challenge accepted.” This is a blade-fitted variant of the classic Kubotan self-defense tool. But it could has a glassbreaker and handcuff key, because why not? You can’t make a list of EDC tools these days without something credit-card sized. There are dozens of different card knife designs out there, but these guys seem to do it best. Finally, this bizarre knife design looks like something out of Bladerunner, which, depending on your style, could be a good thing.