I was recently researching homicide rates, attempting to determine the primary factors behind homicide rates between states and nations. I came across the updated version of The Color of Crime. The report tests hypotheses about crime and arrest rates in the United States — offering ethnicity-related analysis that the mainstream media dare not speak. The 2016 updated version is loaded with bar charts illustrating the statistical differences in crime rates between Asians, Blacks, Hispanics and Whites. The Color of Crime includes a section on police killings of suspects. The results of the evidence and analysis are startling, and turn many modern political assumptions on their head . . .

Using data collected by the Washington Post, The Color of Crime‘s author Edwin S. Rubinstein found that black people were 2.45 times as likely to be shot by police as white people. Black people were also 4.46 times as likely to kill a police officer than people of other races. (“FBI data show that from 2005 to 2014, blacks accounted for 40 percent of police killings. Since blacks were approximately 13 percent of the population, it meant they were 4.46 times more likely than people of other races to kill a police officer.”) Black people are arrested for violent crimes at 5.35 times the arrest rate of white people. 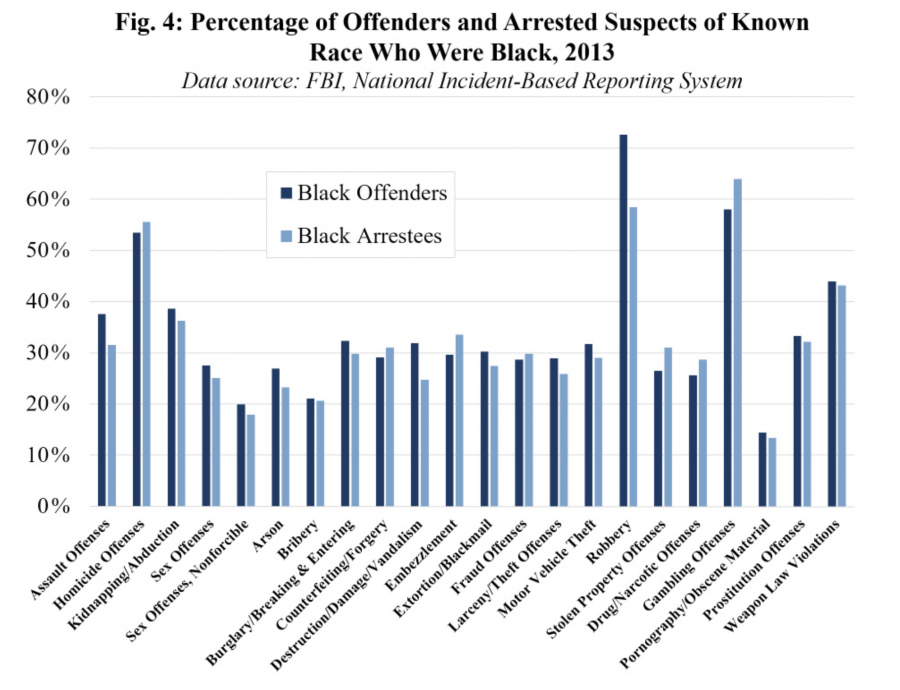 Rubinstein’s study compares victim surveys with arrest rates. Victims would have little reason to misidentify criminals; and most crimes are intra-racial. Comparing victim surveys with actual arrest rates reveals that blacks are arrested at a slightly lower rate than the rate they actually commit crimes. Thus, if there is a bias, it is against black victims, rather than against black criminals.

There is little editorializing in the research; the author’s only suggesting that crime rate differences have something to do with economic status in passing. Out in the wider world, there’s no dearth of speculation about the reason behind the differences in crime rates among Asians, whites, blacks and Hispanics. This study shows that bias in arrest rates and incarceration rates is not one of them. If anything, it points in the opposite direction.

Here are the report’s major findings: