The authors of this paper conducted a 500 round stress test to determine if either of two semi-automatic shotguns, an FNH SLP Mk. I or a Mossberg 930 SPX, would experience mechanical difficulties to determine which was better suited for 3-gun competitions. Testing was conducted using one lightly used shotgun (<200 rounds) of each model. Both guns fired 500 rounds in under four hours, using two different ammunition types commonly found in stores, rotating through 6 shooters to ensure operator error was controlled for. [Conclusion redacted for the sake of dramatic tension.]

In the world of 3-gun competitions the shotgun provides a unique challenge for the competitors. Shotgun targets are typically rigged to move or react in some manner, whether it’s spinning such as with the Texas Star or flying like a clay pigeon. Typically, the competitor must fire multiple shots in quick succession to effectively neutralize the target. To decrease the time they need to take between shots, competitors (especially those in the Tactical divisions) have moved from pump action shotguns to semi-automatic models.

While semi-automatic shotguns provide a tangible benefit in terms of decreased cycling time (the time it takes to remove the spent cartridge from the gun and load a new cartridge into the chamber), the mechanisms which enable that semi-automatic operation are susceptible to failure. It is more likely that a semi-automatic shotgun will malfunction in the middle of a stage than a pump action shotgun, costing the competitor precious seconds clearing that jam. According to conventional wisdom, the number of rounds fired and the abuse the firearm has received since its last cleaning is the principal factor which increases the probability of malfunctions in semi-automatic firearms.

This test was initiated with two specific goals. First, to determine if a modern semi-automatic shotgun would be subjected to enough wear (defined as fowling and residue produced as a byproduct of the firing of the firearm) during the course of a typical 3-gun competition to cause a malfunction. Second, to determine what differences, if any, were present between the 2 shotguns considered in the test.

In the world of 3-gun competitions the competitors are divided into various divisions based on the equipment they choose to use. This particular pair of shotguns are currently considered the best options for the “tactical” series of divisions (Tactical Optics, Tactical Irons, Heavy Metal Tactical) as well as the “Limited” (with restrictions) and “Open” divisions. Tactical division is generally the most popular division at any given event. For this reason the shotguns were tested in the proper configuration for a Tactical division shotgun.

We used two different brands: Remington #8 shot 1 ⅛ oz. target loads and Winchester Super X #8 shot, the cheapest available at Dick’s Sporting Goods and Wal-Mart stores respectively. To make sure both shotguns received the same amount of wear, the ammunition was divided evenly, 250 rounds of each brand being fired through each gun, alternating brands every 25 rounds with both shotguns firing the same brand at the same time.

This test was intended to solve a question related to functioning of shotguns during a competition. We cleaned, lubricated and inspected them meticulously before the contest, as competitors would before a match. Both shotguns had seen light use prior to the test.

We designed this experiment to determine if any malfunctions occurred in any of the shotguns and to document when they happened. In the course of our work, we logged other performance results to further determine which shotgun best suits 3-gun competition. The first such side experiment investigated whether or not the “smoothness” of the action degraded as the shotgun was fired. The action’s operation may affect the speed of the shooter, especially if malfunctions must be cleared or the action opened to abandon the weapon on a stage of competition. “Smoothness” was determined on a subjective basis before the test on a scale of 1-6, 1 being equivalent to a well-polished and oiled 1911 pistol’s slide, 6 being equivalent to an AK-47 that has significant rust and is hard to open. This subjective test was repeated again at the end of the course of fire. For the test proper, both shotguns were fired simultaneously. To control for any issues that were purely user error, six participants rotated through shooting each shotgun in order. One at a time, each shooter would be presented with a target thrown by the assistant. He would fire at each target. Hits and misses were recorded by an observer, as well as any mechanical malfunctions. Following the completion of testing a survey was taken of the participants to determine which shotgun they preferred. This survey was not disclosed beforehand and the owners of the shotguns in question were not allowed to participate.

All results are presented in terms of “boxes of ammunition.” To make the results more readable, the smallest unit of measurement considered was a set of 25 rounds, which is the same as the amount of shells contained in a single box of ammunition. Shooters and ammunition types were rotated every 25 rounds as well, meaning each set of 25 rounds presented a unique combination of shooter, firearm, and ammunition type. By partitioning the data in this manner, the results may be viewed more as a collection of smaller tests rather than a single continuous test.

The second metric recorded and analyzed was how many clay pigeons were hit per box of ammunition. As the boxplot below shows, both shotguns were almost identical in terms of clay pigeons hit, suggesting that the varying skill levels of the shooters involved was properly controlled and the results would be more indicative of how the shotguns functioned rather than the shooter’s competence. 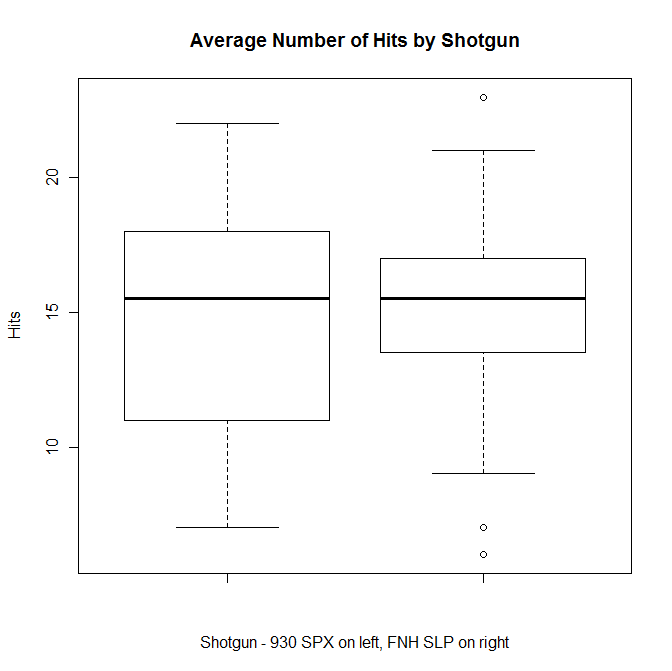 A Welch two sample T-Test confirmed that the two distributions were statistically similar. The T statistic was 0.144 (which, with 37.83 degrees of freedom, indicates that any differences in means is probably a chance finding), the P-Value in this test was 0.8863, and the 95% confidence interval was closely straddling zero (-2.612411, 3.012411).

The final and most important metric was the reliability of the shotguns. As the boxplot below shows, the probability of a failure per box of 25 shells was far greater in the FNH SLP than the Mossberg 930 SPX. 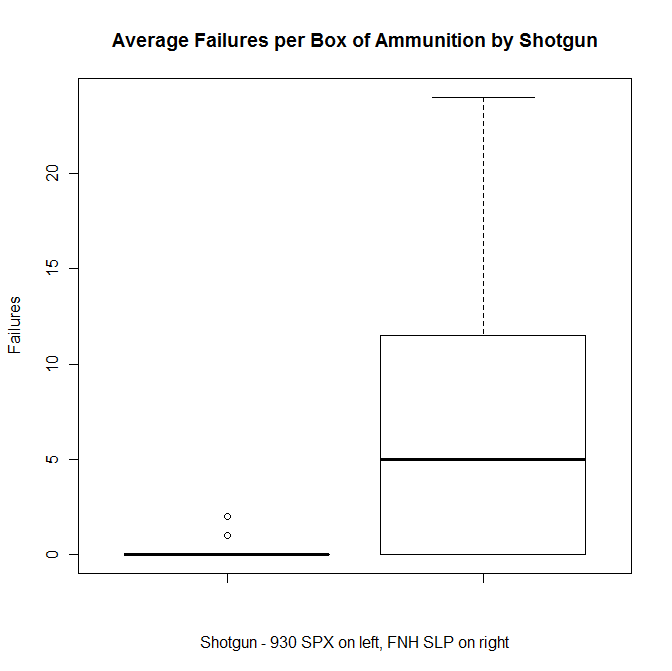 As the graphic above shows, the final results of the test indicate that an FNH SLP is likely to have approximately five failures for every 25 rounds of ammunition, while the number of failures for the Mossberg 930 SPX is not statistically significant. However definitive that plot may look the bar graph below, illustrating total failures per box for each of the 20 boxes of ammunition, may indicate a reason. 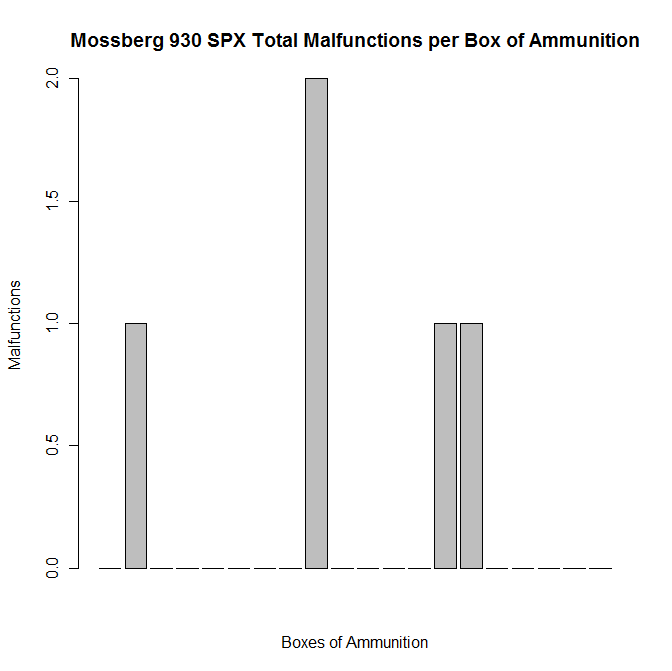 For the 930 SPX, the failures are somewhat evenly spaced (box #1 is on the left, and box #20 with rounds 475-500 is on the right). The even distribution and sparsity of failures indicates that the failures are genuine mechanical failures due to wear and dirty machinery instead of user error. In addition, the failures occur for both Winchester and Remington ammunition indicating that ammunition type was not a factor. 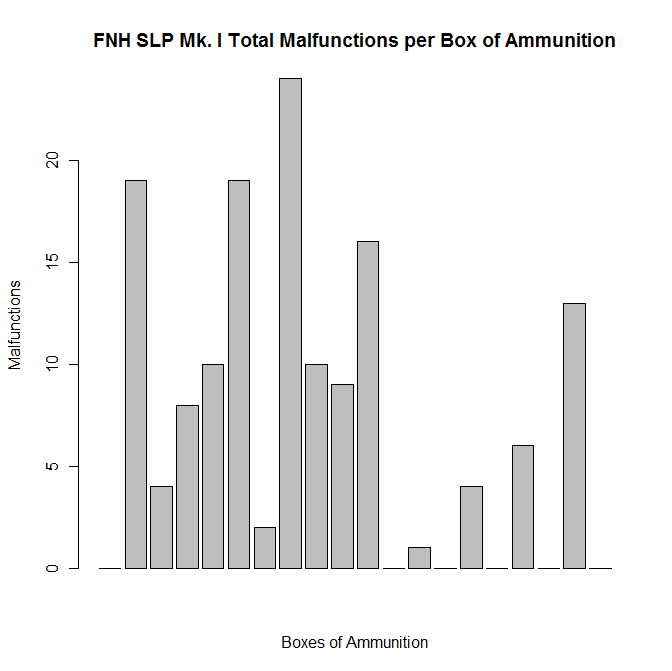 With the FNH SLP, the last 10 boxes of ammunition tell a very different and interesting story. Because the failures alternate, with some bars having no failures and some bars having failures, it seems to indicate that the ammunition was to blame and not the shotgun as the malfunctions were exclusive to the Winchester ammunition. In addition, because the failures are present in multiple bars it would seem to indicate that the user was not a factor in increasing failures. The first 10 boxes of ammunition, however, seem to negate that theory as the failures are persistent and almost evenly distributed. This discrepancy could possibly be explained as the SLP’s break-in period (the number of rounds required to put the proper level of polish on the operating mechanism for it to begin to function normally) as the shotgun was used extremely lightly (less than 200 rounds) prior to the testing.

The relatively subjective test regarding the degradation of the action due to wear proved inconclusive, as both shotguns experienced a drop in “smoothness” from a 1 to an average of 2.5. The other subjective and qualitative test, the survey, showed a marked preference for the Mossberg 930 SPX with 100 percent of the respondents preferring it in terms of its sights, weight, balance, and perceived recoil. In terms of ease of operation, however, only 67% preferred the 930 SPX to the FNH SLP.

Because of its consistent reliability regardless of the ammunition and the equivalent accuracy between the shotguns it is the determination of this study that the Mossberg 930 SPX is the superior 3-gun shotgun.

Special Thanks and Acknowledgements

[EDITOR’S NOTE: To clarify, the “light” piston was indeed used in the SLP Mk. I despite not being mentioned in the write-up.]