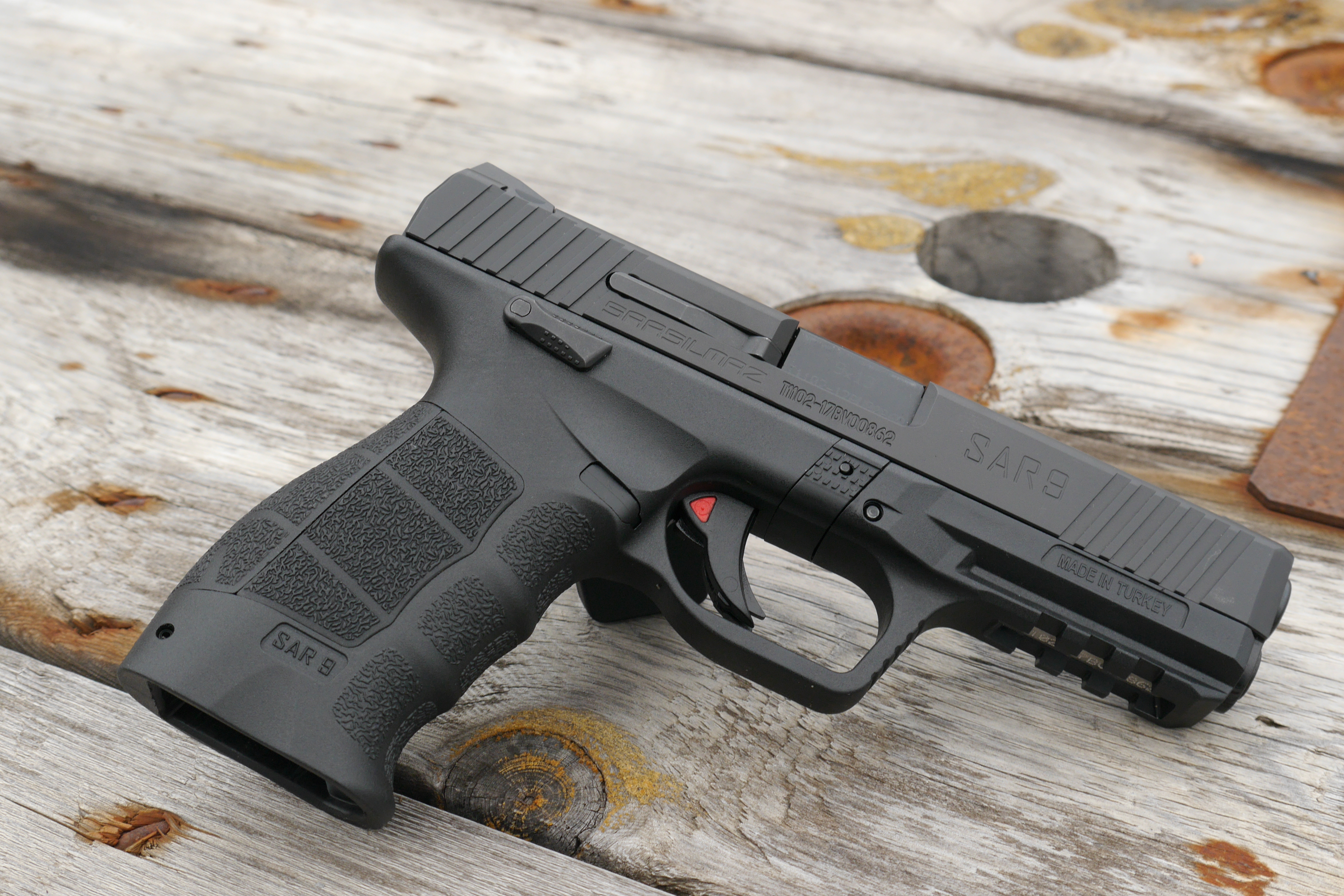 Gun manufacturers are in love with the Walther PPQ M2. Remington’s RP9 is basically a photocopy, offering the same ergonomics and overall design. Heckler & Koch may hate you but they love the M2; the HK VP9 bears more than a passing resemblance to PPQ. The Sarsilmaz SAR 9 falls into the same category of top-heavy, striker-fired handguns. But at least there are some design choices that on the surface which make the SAR 9 more interesting. Picking up the SAR 9 for the first time, the ergonomics are spot-on. While the SAR 9’s finger grooves are GLOCKish, they’re understated and smooth in the great Waltherian tradition. The Turk’s grip provides just the right balance of purchase and comfort, semi-customizable with a replaceable backstrap.

Also appreciated: the grooves at the base of the grip. Even though the SAR 9’s magazine drops free at the press of a button, the grooves are great for malfunction clearing. You can rip a mag out of the gun in partial seconds. When it comes to preventing a negligent discharge, frame-mounted safeties are an extra protection, welcomed by many. When it comes to armed self-defense, shooters need to be able to switch off a frame-mounted safety quickly and efficiently. Instinctively. Imagine being attacked by a large person with a machete; an angry pile of carbon advancing towards you that needs to assume room temperature ASAP. Now imagine fumbling with your handgun’s safety.

This SAR 9’s safety’s slim profile makes the gun great for sliding in and out of holsters. The low-profile switch also makes it extremely difficult to apply enough pressure to switch it on or off. If I had to guess, I’d say It takes roughly half the weight of a fully loaded 747 to move the safety from the “safe” to “fire” position. In short, when you really need to disengage the SAR 9’s safety it will be nearly impossible to move.

The SAR 9’s recalcitrant frame-mounted safety pretty much excludes the gun from competition consideration. Typically, competitors must engage the safety when discarding the handgun for another firearm. On a GLOCK or GLOCK-like handgun with a trigger safety, competitors simply put the gun down. The SAR 9’s safety would lead to a solid thirty seconds of fumbling at the dump box. No bueno.

What’s up with that? Federal law requires certain safety features on imported handguns.To satisfy these requirements, Turkey’s sole official supplier to the police and military slapped a safety on an otherwise striker fired-only handgun with the expectation that no one would ever actually flip it on. And yet, here we are. The SAR 9 uses a typical split trigger striker-fired design. The trigger functions as it should, with a reasonably clean break and a Walther-like quick reset. But it feels like a cheap imitation of a good trigger — wobbly, gritty, and generally displeasing. It’s the GoBots to GLOCK’s Transformers: a poorly made imitation that feels flimsy and rough on the edges. The gun ships with a set of three dot sights. Well, two dots and what appears to be a sperm.

Some quality control issues I can overlook. In this case I literally can’t — I’m forced to see SAR’s lack of quality control every time I fire the gun. Gritty triggers and extra flashing on internal components I can understand. There’s no excuse for shipping a gun with defective sights.

If extremely obvious problems can fall through the cracks, I start to question what else might have slipped through. The SAR 9 takes down just like a GLOCK (and every other non-GLOCK GLOCK). That said, the takedown levers on either side of the SAR 9’s frame are easier to manipulate than Gaston’s gear. So there is that. Out on the range the gun performs admirably. The trigger feels a bit gritty, but otherwise it’s acceptable. The pistol actually shoots rather soft for firearms of its size and weight in my opinion — I was able to get the gun back on target quickly and without a whole lot of effort. Accuracy is good, and the gun feeds reliably using both steel and brass ammunition. The one note I will put here is that Blazer steel cased ammunition has an interesting quirk in this gun where the spent cases will tend to fly directly into your face. So be warned, and wear your eye protection. Overall the SAR 9 is a good not great gun, further hobbled by a safety switch that needs immediate rectification. If the Turkish import was priced in the Hi-Point price range, fair enough. At an MSRP of $449, with less troubled firearms like the Remington RP9 retailing for $170, it’s a non-starter. These days there’s not enough room in the market for a poorly made firearm, at any price.

Fit and Finish *
Gritty, wobbly, and with some extra paint thrown in on the sights for no additional charge.

Overall Rating *
Over twice as expensive as a better quality firearm and shipping with a mandatory, yet almost unusable safety. This doesn’t sound like a winning combination to me.