When you’re a reporter, you dream of a day when a story – a really juicy story – falls right into your lap, all tied up neatly in a bow. So it was with visions of the blogger’s equivalent of a Pulitzer Prize (there IS a blogger’s equivalent of a Pulitzer Prize . . . isn’t there?) that an email came across my desk in my lonely writer’s garret, that made me sit up and take notice. The email recounted a story about a man who was pulled over for a traffic stop. He had pro-gun bumper stickers affixed to the rear window of his pickup truck. It was late at night. When he was pulled over, he immediately got out of his truck and walked to the rear of the vehicle. The officer asked him “do you have any guns in the vehicle.” He said, yes I do.” The officer asked him to stay in the back of his truck, walked to the truck and removed the firearm from the vehicle.

The officer then removed the magazine, and asked the man, “Is there a round in the chamber?” Again, the man replied in the affirmative. The officer ejected the round. After speaking with the man for a few minutes, the officer did not press charges, returned the weapon to the man, and allowed him to drive away.

Sounds like a potentially electrifying story, right? Illegal search and seizure, 2nd Amendment rights violated, castle doctrine infringed, that sort of thing. And personally, it was a bombshell, because it happened where I live. Yuppers, this took place right here in lil’ ol’ Shreveport, Louisiana, the town where I grew up, and where I am once again residing – at least for the present. But the story gets, as they say, “better.”

A few days later, the man who was stopped, Robert Baillio, called Shreveport Mayor Cedric Glover, to discuss the incident. He also had the presence of mind to record said conversation. In that call, Mayor Glover said (some 11 times in 19 minutes) that when someone is pulled over by a police officer, “their rights are suspended.” Huh?

Glover opined that the officer was within his rights to do anything and everything to make the scene safe for the officer, the suspect, and anyone else in the area. Here’s a two-part YouTube video of the phone conversation Baillo had with the Mayor (it is legal to record a telephone conversation in Louisiana, as long as one party knows that the conversation is being recorded.)

In reading other bloggers’ coverage of the story, the incident was covered as a huge, hot-button, Second Amendment issue. From the reports, it sounds like what we’ve got here is another gun-grabbin,’ totalitarian-leanin,’ jack-boot wearin’ govmint sitch-e-ashun. I wanted to know more. After all, I’m living here, and when word gets out that I’m a writer for TTAG, I don’t want to get stopped every six blocks, right?

So, my reporter’s Spidey-senses tingling, I messaged RF for the green light, and plunged into my investigation. I had visions of interviewing the mayor, the aggrieved citizen, perhaps a constitutional law professor or two (“Get me Dershowitz on line one, STAT!) and other perks accorded the upper echelon of scribes. I started composing leads in my head – along with my acceptance speech to the Prize committee. (Are you SURE there’s no web equivalent to a Pulitzer Prize for web journalism?)

But we here at TTAG are dedicated to the truth, (it’s in our name…and our DNA), the whole truth, and nothing but the truth. In other words, we want to present all sides to the story. Not just the one that will “sell papers.” (One of the freedoms that comes with blogging is we don’t have to worry about all that paper and ink.) So I did what ethical journalists do. I dug deeper. And deeper. I listened. I researched. And I learned that there are two sides to this story. (Big surprise.)

Lets get some facts straight, first.

The incident took place back in June of 2009. Not exactly “hot news,” but hey – I didn’t get back to Shreveport until July of 09. So sue me. There’s dash-cam recordings of the traffic stop, so you can see for yourself what happened.

In the state of Louisiana, by the way, it is legal to carry a weapon in your vehicle, no permit needed. Baillio had a permit to conceal carry, but it was not needed in this instance. When asked, he answered truthfully about owning a gun, and having it in his truck. He answered truthfully about the gun being loaded. And he did not interfere with the police officer’s investigation in any way.

The officer, for his part, was unfailingly polite, and from what I heard from the tapes, conducted himself in a professional, even friendly manner. He did not first ask for the driver’s license, insurance and registration, but instead asked first if the suspect had any guns in his vehicle. I surmised that he asked about guns based on the bumper stickers affixed to the rear window of the cab of the truck. 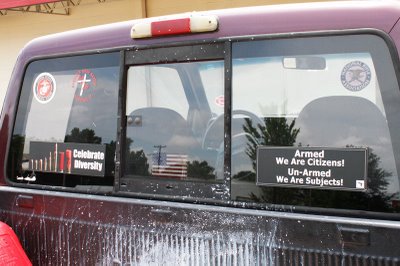 It turns out that the officer in question was on DWI (or DUI – whatever) duty, and pulled Mr. Baillio over because he failed to signal a turn. Turns out, a lot of drunk drivers fail to do the same thing. Profiling? I don’t think so. Oh, and the officer is also a fellow NRA member. In the tape, you can hear him making approving comments regarding Baillio’s membership. It doesn’t sound to me like (as several bloggers suggested) that the traffic stop was “NRA profiling.”

I can see, from the officer’s perspective, why he would want to make sure that any and all weapons were secured, while he conducts an investigation. But…

Where it gets a little weird is the fact that he jumped right to “do you have a gun” and skipped the “license and registration” questions. Then, he goes over the line when he fails to ask Baillio if he can search the truck, nor did he search Baillio for any weapons he might have had on his person. Now I realize that Baillio did not appear to be intoxicated (he wasn’t) and he cooperated fully with the officer.

Baillio would have been within his rights to deny the officer entry into his truck, and insisted on a search warrant for the vehicle, prior to the officer being able to conduct a legal search. There was no “probable cause” in this case – Baillio had not been given a field sobriety test, and failure to signal a turn is a tissue-thin basis to search a vehicle.

But it’s the call with the Mayor that has everybody up in arms. And even there, we have two sides to the story. From where I sit, the Mayor was wrong, when he said “your rights are suspended.” Unless somebody declares martial law, your Constitutional rights don’t get suspended, just because you’re pulled over for a traffic stop. Glover is not an attorney. Like many politicians, he tends to say in several paragraphs what he could have said in a sentence, which is, by the way, how politicians put their foot in it. (Next time, less is more, Mr. Mayor.)

It’s apparent from the phone conversation, that Glover did not either have or recall all the facts in the case. He told Baillio that he gave up his right to have a gun in his hand durring a traffic stop. Baillio was nowhere near his gun. And while it may be a screamingly good idea for an officer to secure any and all weapons while conducting an investigation, the simple fact of the matter is that the officer did not ask permission to search the truck – a requirement under Louisiana law.

Since Baillio was not in the truck, he could not have gotten to his weapon any way, so the officer’s actions seem a bit on the excessive side to me. However, I was not there, so I can’t really make that call. Cops make judgement calls all the time. He may have gone a little over the line in this instance, but the police officer was no “jack-booted thug.”

The Mayor gets pretty far out there in the course of the conversation. He claims, despite protestations to the contrary, that Baillio couldn’t possibly be a supporter of the police, because if he doesn’t support all police actions, he can’t qualify as a supporter. Wow. In religious terms, I guess that would come under the doctrine of “love the sin AND the sinner.”

If you listen to the entire phone conversation and can get past the Mayor’s outrageous claims, you’ll likely see, as I did, that Baillio goes just a bit off the reservation, too. Baillio segues into a riff on “police gettin’ kids to buy alcohol so they arrest the person that sold it to them.” Huh? I mean, I get that he’s talking about entrapment issues, but how does that enter into this discussion.

Here’s a link to how the local ABC station covered the story: http://www.ktbs.com/player/?video_id=19576&zone_id=2.

Here’s the blog coverage that started the firestorm: http://www.conservativedrink.com/2009/06/15/our-rights-are-suspended-by-mayor-cedric-glover/

From everything I’ve been able to piece together, the traffic stop was legit, and not profiling. The officer conducted himself professionally, his only mistake in being that he did not ask, nor did he obtain permission to search the truck. Frankly, if he was concerned about Baillio having a weapon, I’d think the cop’s first move would have been to frisk him.

Baillio also behaved in a calm and cool manner, both during the stop and on the phone with the Mayor. The Mayor might want to have a one-on-one with the city attorney, before the next time he discusses these issues on camera or with a constituent.

As far as this story goes, I think I can safely forget about qualifying for the iPulitzer. And the others that have written, interviewed, or blogged on this story might want to do a little digging before they try and paint it as strictly a black and white issue.