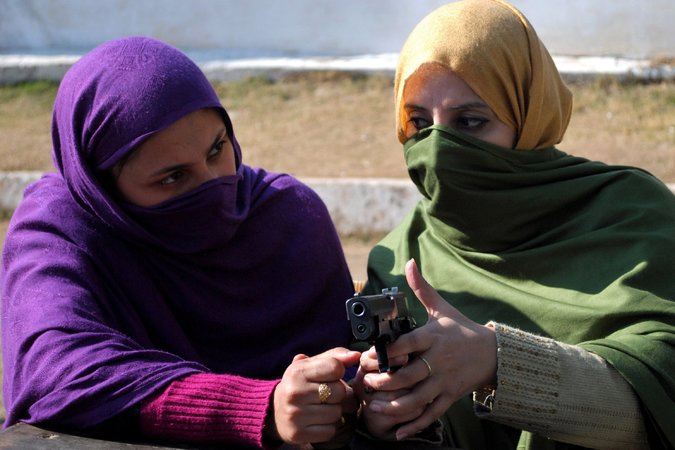 The New York Times reports that police in northwestern Pakistan are “offering firearms instruction to schoolteachers and university lecturers” in response to the Taliban’s massacre of nearly 150 people at a Peshawar school in December. Reporter Ismail Khan writes, “Gunfire rang out as Fatima Bibi squeezed off three shots, hitting her target every time. Then she lowered her Glock pistol, turned to her fellow academics and smiled. Her instructor was smiling, too.” . . .

“These ladies are better shots than some of our men,” said Abdul Latif, a police firearms instructor. “They learned to handle a gun in just two days. Their confidence level is remarkable.” …

“The December 16 tragedy showed us that we need to learn to be able to take care of ourselves and our students,” said Naheed Hussain, an assistant professor, who took the course while still wearing her black teaching robe. “We will not replace our pens with guns. But the situation could arise where we are required to serve our country.”

All the usual groups that line up against any civilians availing themselves of their right to armed self defense are aghast at the idea of teachers — female teachers! — training to defend themselves and their students against terrorists.

The notion of armed female teachers, in particular, has provoked consternation across conservative Pashtun society, raising a storm of protest that officials say could call the entire plan into doubt….

Abaseen Yusufzai, head of the Pashto department at Islamic College University, said, “This is the stupidest and most illogical thing that has happened in Pashtun society in living memory.”

“Women provide moral support, food and water to our warriors,” Mr. Yusufzai continued. “But never in our history have they been required to take up arms. It suggests that the men have lost their nerve, and the courage to fight.”

For their part, the teachers appear to be, well, empowered by the training.

“As I gripped the gun and opened fire I started to sweat, thinking I should have a pen in my hand and not a gun,” said Akhtar Nagina, a physics lecturer at the Frontier College for Women. “But then I remembered what the terrorists had done. And I figured I should at least have a gun in my purse, for my own protection.”