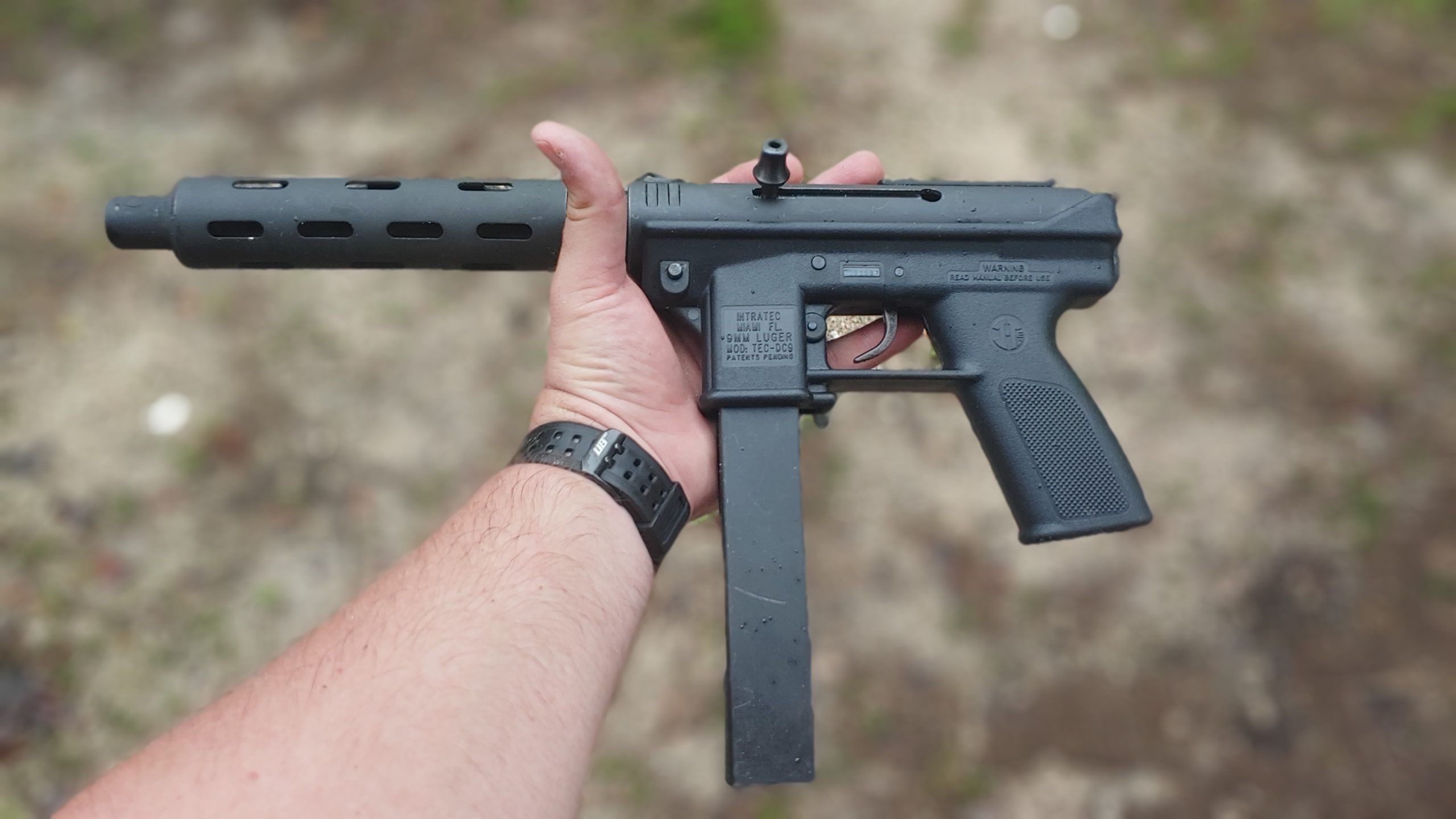 Let’s be real here; this isn’t an attractive, well-crafted or particularly effective firearm by any objective measure. We’ll go into why, but the TEC-DC9M is not a great gun. Why, then, is it an obscure object of desire?

The TEC-9 and its various incarnations are largely useless weapons. They are outclassed by every semi-automatic weapon and most manual action repeaters. Yet, it remains hated because it looks scary.

And it has a barrel shroud! Oh my! It also has a magazine that’s forward of the trigger. But don’t forget the barrel shroud. That’s the thing that goes up.

The TEC-DC9M was also cheap, and none of the poors should be allowed to own weapons. In short, he TEC-DC9M carries on the proud tradition of being a troll in gun form. The TEC-9 was probably the original scary-looking pistol with a longer barrel and built-in barrel shroud. Over time the design changed for various reasons, and one of the big ones was the fact that it had to stay one step ahead of gun control laws.

At one point, they just changed the gun’s name when it was specifically banned.

The TEC-DC9M is the compact version, for lack of a better term. The barrel shroud is removable and the weapon is most certainly more compact than the original TEC-9, although it’s still massive and larger than a full-sized, double-stack 1911.

What’s in a Name?

The name TEC-DC9M is a mouthful, but it breaks down into a descriptive name and helps share the history of the gun. TEC comes from Intratec, the parent company that produced the TEC 9 series as well as several other cheap and often crappy firearms.

DC can stand for a lot of things and reportedly does. According to some, here it stands for Designed for California, but I can’t find any documentation for that. The head honcho of Intratec’s marketing claimed DC stands for District of Colombia. Washington, D.C. banned the gun by name, so changing the name made the gun legal in the capital once more. According to the owner of Intratec, DC stood for defensive carry.

The M stands for Mini…because it’s so small, right?

The Dirty Details of the TEC-DC9M

Mini means the barrel is a petite 3 inches long, and that’s the only place they trimmed. Other than that, it’s a TEC-9 through and through. You can even attach a barrel shroud for that classic TEC-9 look.

The TEC-DC9M is a blowback-operated weapon with a massive bolt against a heavy recoil spring. The frame is made of polymer, and that was advanced for the time.

The sights are, um, well they are sights. The rear is an open notch and the front sight is a piece of metal folded downward.

The TEC-DC9M also features a bolt handle that doubles as a safety. Press it down, and the gun is on safe, pull it upwards, and the weapon is ready to go.

It’s probably the worst designed safety I’ve ever seen. It’s very easy to bump it into safe when manipulating the bolt. If the bolt handle is even slightly depressed, it stops the gun’s operation.

The magazine release is a tab on the bottom, behind the magazine. Press it and pull the magazine out, and that’s it. No drop free goodness here. Also, you can under insert the magazine, and over insert it! Good luck on guessing the right magazine depth for proper function.

That leads us to TEC-DC9M’s biggest problem; reliability. The gun doesn’t always function and will shoot two or three rounds before it inevitably fails in some way or another. I’m sure it has to do with magazine issues, and maybe a better mag will make the gun run, but who knows which magazines work?

Another issue is the fact the gun needs hotter ammo to run. Plain old 115-grain ammo just won’t do it. 124 grain Winchester White Box seems to work the best. One time I fired a whole eight rounds in a row, and it was all WWB 124 grain.

The recoil of this gun isn’t as harsh as a snappy little subcompact, but it’s hard. What I mean is the gun moves a ton because of that big blowback-operated bolt. It jumps and jives and keeps you from tracking the front sight.

The gun itself has plenty of real estate to grip and rip with, and the pistol grip is quite comfortable. That’s about the only nice thing I can say about it.

So yes, the TEC-DC9M sucks, but its history of irritating anti-gunners makes it a certfied obscure object of desire. At least for me.