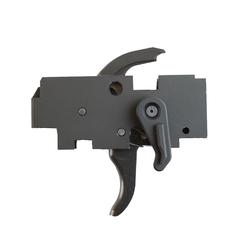 Franklin Armory’s Binary Firing System puts that safety selector third position to use. “Safe” and “fire” remain as usual, but moving the selector to what’s traditionally the “full-auto” position means the BFS fires once on the trigger pull and again on its release. It has been available for ARs for about a year, and now Franklin Armory is expanding to the HK 91/93/MP5 platforms. Press release follows . . . 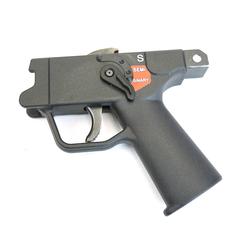 The BFSIII™ for HK is a 3-Position Trigger. In position 3 it will fire 1 round on Pull and 1 round on Release. This makes it the fastest semi-automatic trigger on the market. The BFSIII™ is ideal for Tactical and Competition use. The BFSIII™ provides greatly reduced split times between rounds and the ability to place two separate shots into a tighter group.

*  A trigger pull around 4.5 pounds.
*  Ambidextrous Safety Selector.
*  Safety Selector will fit in two and three position trigger housings.
*  Will not work with Ambiidextrous Housings
*  Trigger housing, ejector, ejector pin and ejector spring are not included.
*  Will fit most HK 91, 93, & MP5 variants and clones
*  Some firearms may require additional fitting
*  MSRP $699.99

Jesus f**k $700? Yowza. My wallet hurts almost as much as the ceiling baffles at the indoor range where I saw one of these triggers in use. I could see the BFS being fun, but beyond that am probably better off holding my tongue.

FYI the BFS is not legal in CA, DC, IA, ND, NJ, NY, or WA. In WA, for example, the law states that firing more than one round per cycle of the trigger means it’s a machine gun. Double check before you binary fire.