All inventors, forward thinkers and idiot savants have “eureka” ideas that are so ludicrous that they make us laugh. Cheese in a hair spray can is one such brainstorm. Another would be flying nonstop, solo, from New York to France in an airplane that’s the size of a Parisian taxi and has no windshield. A concealed carry holster for the Desert Eagle is another idea that seems right up there with Evel Kneivel jumping Devil’s Canyon in a rocket-propelled toothpaste tube. However, as if to prove that the incredible is not necessarily the impossible, there’s Cheez Whiz and Lindbergh and the Louisville Leather inside the waistband holster for the Desert Eagle. . .

The Louisville Leather IWB Desert Eagle holster is the brainchild of Ryan Kuhl, the proprietor of Louisville Leather, and Robert Farago, the proprietor of this here blog. Together, the two latter-day Don Quixotes dreamed an impossible dream that I thought was the loopiest idea since antenna balls. I wasn’t a party to the conversation, but I imagine it went something like this:

Ryan: I’d like to try a really challenging holster project.

Robert: (laughing) can you make an IWB holster for a Desert Eagle?

Ryan: (after a shocked pause) sure, I can make it, but who’s dumb enough to wear one?

Here’s the prototype Louisville Leather holster, looking for all the world like a codpiece for John C. Holmes. The holster is sewn from so much hide that if cows had a Ten Most Wanted List, Louisville Leather would rank right just behind Mickey D’s and way ahead of your local S&M club. I’ll be damned if the holster doesn’t look pretty good and well made, too. I’m not an NRA Certified Leather Tester, but the hide seems first class. The stitching is also very good, and that’s something I do know about. My father was a tailor just like in the song, and even though he never sewed my new blue jeans, he did teach me how to run the old Singer and run it well. Notwithstanding that this is a project holster and not a commercial item, the overall workmanship and quality is close to market-ready, lacking only a bit of refinement at the edges and in the natural stain.

But does the damn thing work?

Yeah, it works, with a couple of caveats.

Strapping the Louisville Leather Desert Eagle holster on is no more difficult or time consuming than donning a complete suit of armor while standing in a canoe in the middle of Lake Erie at night during a hurricane. If you want to strap up after you’re dressed, you might want a squire standing by to help you gird your loins for battle. Otherwise, count on a bit of frustration as you struggle to stuff a couple of yards of stiff leather into your Levis (please withhold all your snickering until the end, m’kay?).

I found the only way to position the holster easily: snap it into position before I put on my pants. I donned trou with holster attached, zipped up, then inserted gun into holster and finally cinched down the gunbelt. Once I mastered that little trick, I was as happy as a first-time drug mule with three kilos of the product duct-taped over his kidney.

Oh, you’re probably going to need larger pants. I’m not necessarily talking about those end-of-the-rack pants that the husky guys buy when nobody’s looking. Nor am I referring to your own personal “fat pants” that you stashed in the back of your closet as a reminder of your pre-Jenny Craig days. MC Hammer drop-crotch harem pants are likewise unnecessary, but would be handy.

Hey, do you think that when MC Hammer sang U Can’t Touch This, he was singing about the pair of Deagles in those clown pants of his? Was he trying to make a bold fashion statement, or was he just chafing? In any case, you won’t need pants quite as large, but you’ll need trousers that run big and a strong, oversized gun belt to match.

But is the damn thing comfortable?

The Damn Thing is Comfortable

The holster was delivered around the time that I was preparing my dinner. While some of y’all may live on watercress sandwiches and fizzy water, my food consumption accounts for a measurable portion of the gross national product of several agrarian nations. So, in order to put the holster through the toughest test possible, I enjoyed chowing down prior to strapping up. Thus, my pants and belt were already strained even before I donned the holster.

When I try on a new pair of shoes, I can tell in three seconds whether they’ll be comfortable all day, or whether they’ll feel like a pair of vice grips by noon. As soon as I wrangled this holster into position, I knew that it would be comfy and cozy.

I was really surprised that the gun and holster actually provided a modicum of lumbar support when sitting on a regular chair.  While the Deagle and holster will never replace the Original Buckwheat Sobakawa Cloud Pillow, it didn’t feel bad at all. All the gun’s sharp bits were nicely covered by smooth leather. The only hiccup was sitting in a car seat. In the low-slung seat, the Desert Eagle felt like the hilt of a Tripoli pirate’s scimitar was being thrust through my liver, which was not comfortable at all.

So wearing a Deagle in this IWB holster is possible, even comfortable, as long as you’re not a bus driver, truck driver, taxi driver or slave driver. You can walk around all day while wearing this rig and although you’ll always know the gun is there, you’ll feel good about it. But does it print?

If you live in rural Appalachia where people wear light clothing and know about guns, you’ll be made before you clear the front door of your single-wide. In Massachusetts, where I reside alongside the terminally unwary in their blissfully ignorant millions, you might be able to duct-tape a Deagle to your forehead and wear it for a tiara without anyone picking up on it. 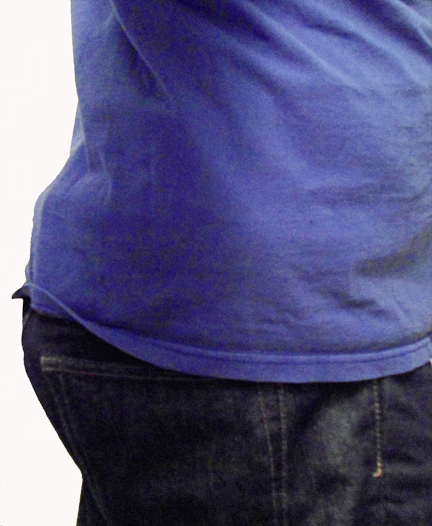 Thank goodness for baggy clothes. There’s a baggy for every bulge, which is why the gravity challenged among us wear floral mumus and such. With this holster and gun combination, the problem isn’t what shows at the four o’clock position where the bulk of the gun will repose. A loose shirt will conceal the gun, and at the very worst, there will be a hump that says “colostomy bag,” not gun. The real problem is what shows at your six.

See, the Deagle has a barrel as long as the Alaska Pipeline, and as revealed by the photos, it pokes at the seat of one’s pants like a tent post. Yes, that prominent bulge visible behind me is not my ass, it’s the gun. Well, okay, my booty did make a small contribution to the overall composition, but it’s mostly the gun.

This extrusion does not scream gun. No, it’s much worse than that. It screams “Depends.” Personally, I’d rather have someone look at my tushy and think he has a gun rather than he has a pantload, but that’s just me.

But can you draw the Eagle?

Because the Desert Eagle is so long, I was concerned that it would not be drawable. I could imagine slapping leather and running out of arm before the gun ran out of holster, but it didn’t work that way. That’s not to say that the draw was easy. The Desert Eagle has a prominent front sight, but the holster did not have a deep enough channel to accommodate it. That’s an issue that could be fixed in a production model. For testing purposes, I was able to cure the problem by pushing and pulling the gun through the holster in a back and forth sawing motion, merrily plowing a furrow in the leather interior deep enough to plant corn. That did the trick.

Once I’d broken in the holster by using it repetitively, drawing was much improved. When it was time for the big gun to come out and play, it slithered out as sinuously as a well-fed python from a rabbit hole.

But is the gun secure? That’s four and a half pounds of steel in the holster, which I am holding upside down just to make a point. The whitish background is a wall, not a table. Retention is great even without a belt. Once the Desert Eagle is stowed in its leather sheath, it’s going nowhere unless you want it to.

But can you reholster the gun with one hand?

These Questions Are Starting to Get on My Nerves

Yes, the gun can be reholstered single-handed. It’s a big gun. Fit is necessarily tight. If you really need to be able to reholster while you handcuff a bad guy to a lamppost or your date to the bedpost, you can do it. Just practice. Manhandling a huge gun is not intuitive.

Louisville Leather’s Desert Eagle project holster turns an impractical concealed carry piece into a gun that can be toted IWB by anyone insane enough to want to do so. For maximum concealment, an owner would need to boast a specific body-type and wear the right clothes for the job. Big guys whose weight runs about three bills and who buy their outerwear from Omar the Tentmaker would be perfect candidates. Men who are less generously proportioned will have some difficulty secreting an object that’s about the size of a two-slice inline toaster, but it could be done. A woman built like a tugboat also might be able to conceal a Deagle, but I don’t see why she would.