I’m not a shotgun expert by any means, but you’d be hard pressed not to find one in my truck. Thanks to its proximity, I’ve probably taken as many deer and pigs with a shotgun as I have ducks and turkey. More than that, I’ve always felt like if I had to walk out of the door with one gun, a pump scattergun would be it. They’re tough and versatile. That’s why I bought a Remington Model 870 Express as my first shotgun. And was sorely disappointed . . .

Whatever reputation the 870 earned in the past, it was clear that Remington was resting on its laurels. It had problems right out of the box. The trigger was gritty, the action was horrible and the magazine tube would only accept two rounds whether the plug was in or not. Shells were constantly getting stuck in the 870’s tube, as well as in the action.

Attempting to extract a stuck shell resulted in a broken stock. Opening the gun up to fix it, I saw tool marks, rough finishes and other evidence of overall poor attention to quality and detail. The whole thing rattled. Simply put, this was not the service gun that I had seen thrown in a trunk, or behind the seat of a truck, that kept on going and going for years.

And now for something not completely different: the Remington 870 Express-based Wilson Combat Border Patrol shotgun. The WC CBPS is the real deal. I can personally verify that the U.S. Border Patrol use this exact model, with thousands provided to agents for everyday use. As a Texan, I know that terrain well. The hot and cold, dry, dusty desert — prone to Biblical rain — will test a firearm almost as much as a marine environment. I’ve heard agents speak nothing but good of their Wilson scatterguns. I was interested to see if the shotgun lived up to its rep, and cured the modern Remington’s ills. 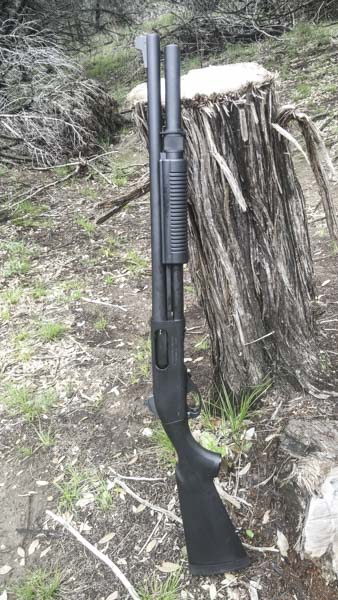 The Border Patrol model starts with a Remington 870 with a 18” cylinder bore barrel and a 3-inch magnum chamber. As with all Wilson products, the company applies a keen eye for cosmetics, even for a service gun. The BPS’ Armor Tough finish is all about function, but it’s even and complete inside and outside the gun. The polish on the action was obvious by function only, without a blemish on the bars or tracks themselves. To make the stock 870 run like it was meant to, before any add-ons or modifications, Wilson’s smiths take it apart and get to work. For all of their shotguns, they:

You can feel the difference the first time you cycle the gun and pull the trigger. Hand the Border Patrol shotgun to anyone familiar with pump guns and you get the same response: damn that slide’s smooth! And fast. The CBPS’s trigger doesn’t break like a high-end 1911, and certainly not like the jewel trigger on some of my rifles, but it outclasses the stock Remington’s trigger by a country mile. There’s no grittiness. Although it’s still a firm trigger, it breaks, not bends, until it squishes. 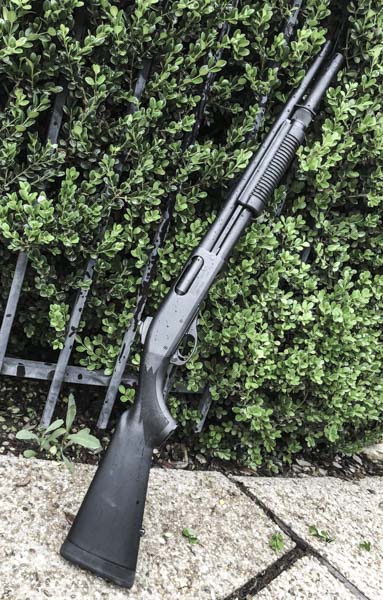 After the smithing is done, Wilson loads on the extras. For this model, those include:
The CBPS’s SpeedFeed stock is a big improvement over the original. With more fiberglass reinforcing the stock, it isn’t heavier, but it’s a whole lot stronger than either the wood or plastic versions. The wrist angle isn’t a big change from the original, but that’s not a problem for me. The recoil pad also works well. I put 140 rounds of 00 buck and about 20 slugs through this gun in just over an hour and my shoulder wasn’t bruised or sore.

Even so, I would have preferred something like the Magpul SGA stock. The advantage of the SGA is the adjustable length of pull and comb height, as well as the ability to mount the sling on either side. Of course, this stock didn’t exist when the Border Patrol model originally came out so if you want to stick to the service gun, you go with the SpeedFeed as it is.

The fit on the Wilson’s rear sight is as good as it can be without more metal work, but it could be better with some additional fitting. The color of the sights is also a bit off. As they are close, but not quite the same. The front and rear sight stand out — and not in a good way.

Otherwise, the sights are perfect. The CBPS’s tall ramp front sight has a tritium insert, ideal for when you want to be the bang after a bump in the night, and doubles as a bright white dot for daytime shooting. The sight is soldered on, it’s not coming off, and for this type of gun that’s the way it should be. I was iffy on the Trak-Lock ghost ring rear sight. I was concerned that the sight was too large to fire accurately, thinking I’d be better off with an open style sight. I was dead wrong. The rear sight’s small enough to easily hammer a 6″ plate standing at 50 yards with slugs, but open enough to track my shots while looking through the sights and moving. The rear sight is adjustable, even though it’s sighted in at the factory — and rock solid. This is my standard now for a shotgun sight setup.

Another surprise: the magazine sling mount. The thing is pretty big. It sticks out from the left side of the barrel and magazine tube at a right angle. I was sure it would be smacking the heck out of me while I carried it. Instead, I found it completely out-of-the-way, except for when I wanted to use it to steady the gun against a tree. The mount is crazy solid. I fully leaned against the gun, putting all of my weight in while pressing the front of the mount into the tree to steady between slug shots. Even in recoil, the mount had zero failures and didn’t bend a bit. Standing like this, I was able to ring a 10″ plate at 100 yards with a slug with complete confidence. I also like the oversized safety. If you think it’s not important, it’s probably because you’ve never engaged the safety while wearing gloves, especially thick ones. My dove gun doesn’t have an oversized safety. My duck gun does and it’s one of the first things I would do to any gun I’d be using in the cold. Wilson’s version is simple and not too big. It pushed on and off easily, and there’s no question whether or not you’ve engaged it. 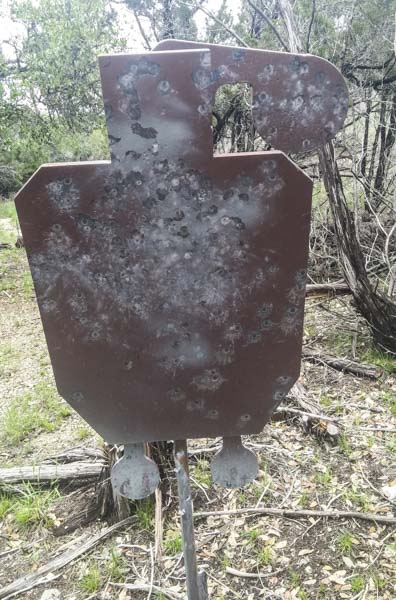 The Wilson Combat Border Patrol shotgun is more than the sum of its parts. It handles like a dream. Administrative reloads are quick and instinctive, and all of the gripping surfaces, including the fore stock, are well textured for maximum grip. I shot this gun in intermittent rain; most of the shots were done with the gun at least a little wet. I had zero issues keeping a hold of it during handling, cycling or transitions in firing. There are a couple of things I don’t like. First, I’d prefer the Border Patrol to start as a Mossberg 500 simply because of the thumb safety, which I find faster and easier to use. (Especially if you’re used to running one from the Army.) Second, the loading gate is too small. Especially compared to the Benneli Super Nova, which is almost twice as long. It’s much easier to load the stock Bennelli two rounds with a single push. Given that a stock Remington 870 express costs about $450, I was highly doubtful that the extra $600+ Wilson Charges was worth it. Then I went back and picked up my stock 870. Whoah. It felt like going from running with track shoes on asphalt to flip flops in the sand. I then ran the Wilson against the Mossberg 500A1 Tactical with Magpul furniture throughout, as well as other replacement parts. The 500 did a lot better, but . . .

If I added up the cost of the aftermarket parts and finish work on that Mossy, I was at $910. And the front sight wasn’t tritium and it was all my labor on the gun. On top of that, although I like the feel of the Magpul stock more, I had to admit that the Border Patrol had a smoother action, it was faster between shots, and Wilson would just deliver it to my FFL with no wait time.

I ended up having a lot of respect for this gun. Again, that has a lot to do with the comparison with a modern-day Remington 870. I would have never wanted to walk of my door only trusting my life with the Remmy. I would do so with the Wilson anytime. In fact, the Wilson Border Patrol shotgun left me angry that I can’t buy this gun, with this level of quality and attention to detail, straight from Remington. Until then, well, here it is.

Fit and Finish * * * *
This may seem picky, but I took a star off for the finish on the sights of an otherwise perfect execution of a “work gun.” Ultimately, that’s a lot of attention paid to a gun that you know is going to be dinged up and beaten throughout the job.

Reliability * * * * *
I only put about 160 rounds through the Wilson scattergun, but I didn’t baby it one bit. I smacked it around, intentionally held it high and dropped it butt first on the ground with the magazine fully loaded. It never had any issues. Leaning on the front sling mount the way I did, I expected it to break or at least bend.  Nothing did.

Accuracy * * * *
How do you measure the accuracy of a service shotgun? At 25 yards I had no trouble keeping all of the 0000 buck center mass on a 19″ silouhette, and I had no trouble rapid firing the head on that same target over and over again. With slugs, even standing and leaning against a tree, I could reliably fill a 10″ circle at 100 yards. I didn’t try to bench rest testing of the slugs, but standing or even walking I could ring a 6″ plate at 50 yards with ease.

Overall * * * * 1/2
The Wilson Combat Border Patrol does everything you want a Remington 870 Express to be and do — only a LOT better. A five star review would have required that loading gate be opened up, and a different stock option be offered at the same price.

[NOTE: you can get everything on this gun — without the additional smithing — straight from Wilson at a cheaper price. You can also just send them your old Remington 870 for their smiths to repair, tune, and finish like this one is. Click here for a complete list of their services and pricelist.]