There are a lot of words to describe what it takes to go directly up against one of the all-time best-selling semi-automatic rifles in the world. Audacity, optimism, bravery, insanity, intrepidity, recklessness, cojones and chutzpah are a few that come immediately to mind. But whatever the motivating force at Thompson/Center (read: Smith & Wesson or American Outdoor Brands) was behind the decision to challenge Ruger’s mega-popular 10/22 platform with the T/CR22 .22 LR rifle, someone certainly did their homework.

As popular as the 10/22 rifles are (they’ve sold about eleventy-billion of them, one to me), no gun is perfect. I’ve owned mine for years and love it. But what I don’t love so much is the fact that there’s no bolt hold open on an empty magazine. And the rifle’s blade-like bolt release switch can be, shall we say, fiddly. 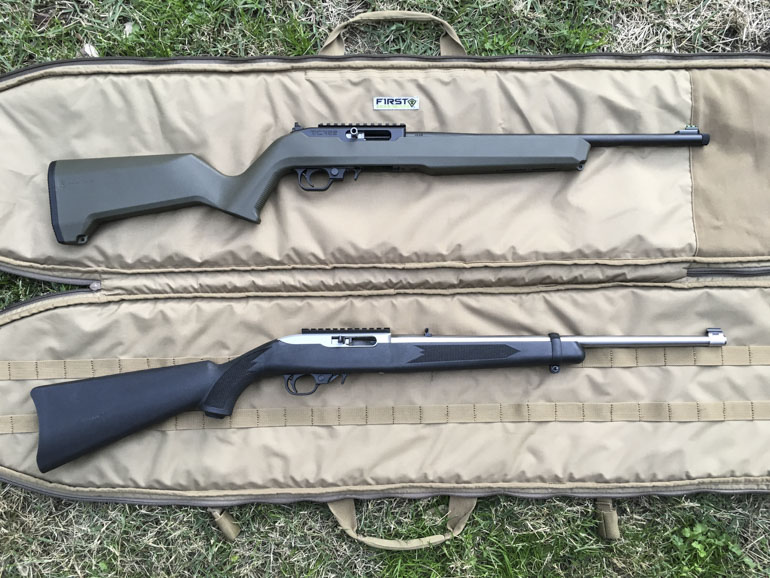 While we certainly weren’t in the room when T/C’s engineers and marketing mavens gathered around a white board and listed the distinguishing features their new rimfire rifle would have, we’d lay odds that adding empty mag hold open and a better bolt release were at or near the top of the list. Right below those two was, undoubtedly, 10/22 compatibility. First, the bolt hold-open. If you use Thompson/Center’s 10-round rotary magazines, your T/CR22’s bolt will stay open after you’ve fired your last round. As an added plus, the T/C rifle will also happily accept and work flawlessly with any Ruger 10- or 25-round mags you may own (I fed the rifle about a dozen of them). The only hiccup is that the action won’t lock back when the mag is empty while using Ruger mags, just like it won’t on a 10/22.

Note the T/CR22’s magazine’s vertical bent lever in the photo above. That’s what actuates the bolt hold-open feature on an empty magazine. One caveat…and I learned this the hard way. Pay attention. Like 99.9% of the world’s gun owners, I don’t bother reading instruction manuals. And I payed no attention to the big billboard-like PRESS LEVER TO LOAD instructions molded right there on the magazine. Yes, I really am that thick.

So don’t just blithely start stuffing rounds into T/CR22 magazines. That’s a good way to jam them and make yourself very unhappy. Push the little lever down, then load the rounds. Do that and it’s just as easy as loading that other brand’s mags. To close the action, just push that much more comfortable, easy-to-actuate lever that’s located just forward of the trigger guard. You drop a mag with a mag release lever that’s a dead ringer for the one on the 10/22.

The T/CR22’s trigger pull is short and fairly crisp, very comparable to that of a stock Ruger. If you want something more precise, the T/C will take aftermarket 10/22 triggers. 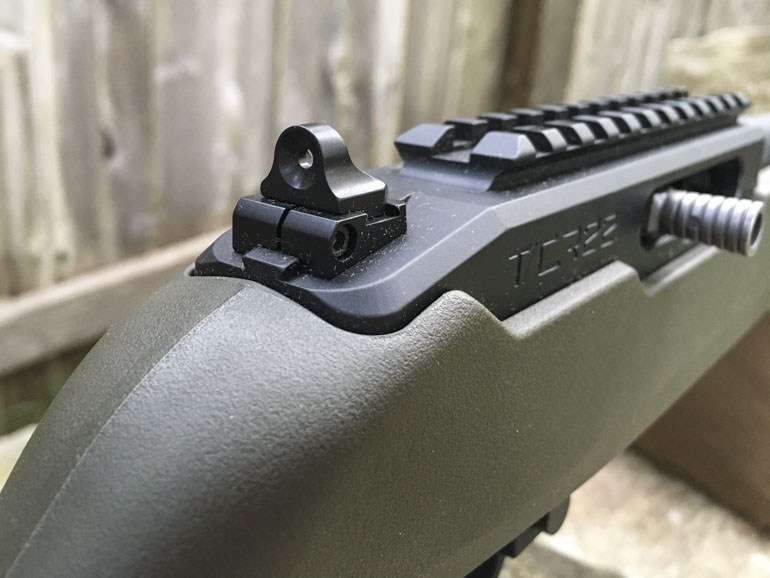 Oh, and unlike the 10/22, the T/CR22’s rear sight (windage and elevation adjustable) is located at the back of the receiver. That means you get about six more inches of sight radius for improved accuracy when shooting with iron sights. Back to that whole compatibility thing. Thompson/Center built the T/CR22 to be as 10/22-friendly as possible. Which means most 10/22 accessories — and there are thousands of them out there for the platform — will also work with your T/CR22. That includes stocks, barrels, triggers and much, much more. If that stock looks familiar, it should. Thompson/Center chose a Magpul stock that’s very similar (though trimmed of a few features, i.e. side M-LOK points and sling loops ) to the popular Magpul Hunter X-22 aftermarket stock. While this isn’t an optic review, after shooting the T/CR22 with irons, I mounted Leupold’s new(ish) 3-9×40 VX-Freedom Rimfire on the rifle for more precise work. This is an excellent scope at a very reasonable price point. Highly recommended.

The question then becomes, how well does this thing shoot? I tested the T/CR22 with all manner of 22LR ammo from the cheapest Remington Thunderbolt stuff to CCI Green Tag to Federal Premium Match (I was fresh out of Eley match grade stuff) in a range of bullet weights from 30 to 40 grains. The rifle liked heavier 40 grain bullets and produced the best five-shot groups with CCI Green Tags (it printed a few half-inch groups at 50 yards) as well as Aguila 40 grain Interceptors (.65-inch groups).

In short, as with any rifle, find your gun’s favorite(s) to get the best results. The T/CR22 is more than accurate enough for its intended use of plinking, training new shooters, having fun and terrorizing small game.

So how did Thompson/Center do in their quest to challenge the semi-auto rimfire king of the hill? Remarkably well. The T/CR22 performs every bit as well as a comparable 10/22. Plus, it gives you that bolt hold open feature that’s 1) important so you can show the rifle’s clear and safe, and 2) is a nice training aid when working with new shooters.

And then there’s the value angle. When you add up all of the T/CR22’s standard features (Pic rail, fiber optic sight, Magpul stock, threaded barrel) that you have to get aftermarket with the 10/22, that makes the Thompson/Center rifle anywhere from $50 to $75 less expensive.

The T/CR22 isn’t going to de-throne the 10/22 any time soon, but it’s a very attractive alternative that a lot of gun buyers would do well to look at when it comes time to buy a rimfire semi-auto rifle.

Ergonomics: * * *
If you’ve shot a 10/22, the T/CR22 will feel right at home. It’s got a similarly short length of pull that makes it a great choice for training young or new shooters, but is still comfortable for average size adults.

Accuracy: * * * * *
Excellent results with a number of brands of ammo tested. This one seemed to prefer 40 grain pills and produced very tight groups. Varmints beware.

Reliability: * * * * 1/2
We had a few failures to fire, but that’s wholly attributable to the nature of .22LR ammunition. Shoot enough of it and you’re going to get a few bad rounds. The action failed to lock back on one magazine in about 500 rounds tested and we couldn’t duplicate that again.

Overall: * * * * *
This is a surprising little gun. Thompson/Center did an admirable job of taking what’s best about a 10/22 and adding some standard features that any shooter would consider improvements. The fact that they also manage to save you some money on the package is icing on the cake.