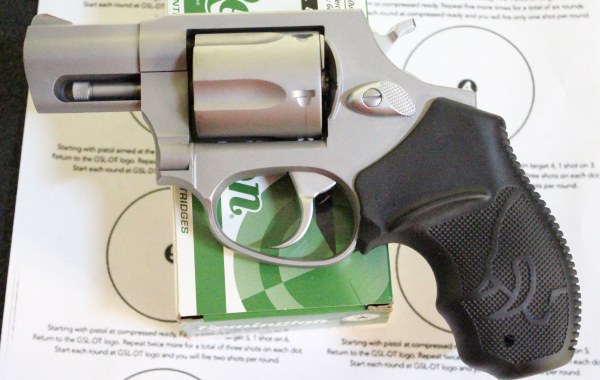 Two years ago, I re-named the then-new Taurus Curve the Taurus Turd. It all came about because I panned a gushing Guns & Ammo “review” of the novelty self-defense gun without sights at gunssavelife.com. G&A then threatened to sue GSL for ridiculing their “review.” Thankfully, they backed down. Personally, I’m no fan of Taurus after a bad experience with their customer service. But I’ve put all of that under the bridge. I won this Model 85 at a Guns Save Life monthly meeting some time back. It had occupied the “New In Box” shelf in my safe since then and I recently took it out to give it a test drive. Taurus didn’t give it to me to review (and keep), so I don’t owe them anything. And while Taurus and I don’t have a lot of love for one another, I’ve still got fond memories of the first Taurus 85 I bought as a gift to fiancee #1. That one left with her twenty-plus years ago.

This 85 doesn’t achieve the perfection that GLOCK claims of their products. Then again, if GLOCKs were so darn perfect, then why the adjustable backstraps? And why can’t they decided whether or not finger grooves are a good idea?

This old-school snub-nosed revolver is made of not-so-old-school stainless with a matte finish.  The manufacturing looks well done, with parts fitting together well and little to no tool marks. It’s a five-shot revolver, chambered in .38 Special and rated for +P loads.

One of its biggest selling points is its price. The model 85 carries a $371 MSRP, but can be easily found for about $300. That’s pretty affordable for those on a limited budget.

Why a 5-shot revolver over some of the newer, small-framed .380 Autos or even similar 9mm products?  Revolvers can be fired from inside a pocket or purse without malfunctioning, giving a bad guy or gal the suprise of a lifetime. Revolvers are also operate using the original point and click interface. And malfunctions in wheel-guns are typically much fewer and farther between than with affordably priced semi-autos.

Another plus: wheel guns will deliver contact gunshot wounds with less likelihood of a malfunction. They’re easy and simple to load and unload for novices — anyone who’s ever watched a wester can figure one out. What’s more, I have it on good authority that when God shoots recreationally, he brings his revolver.

The .38 Special is a versatile round. It’s a potent man-stopper in the old FBI load, the 158-grain semi-wad cutter hollow-point in +P. The recoil adverse can shoot standard-pressure loads with lighter bullets down to a 95-grain, .380-style projectile. In fact, you can load up paraffin “bullets” into primed cases and practice shooting indoors if you’re truly hard-core (and don’t have any neighbors). Try doing that with Gaston’s Perfection™.

The Taurus Model 85 is comfortable to hold and looks good. The cylinder release is a little more difficult to engage than I’m accustomed to with tuned S&W Model 64s and 65s. The cylinder doesn’t swing out perfectly smoothly, but it doesn’t hang up or bind up either.

The ejection rod felt as though it had been lubricated with extra-fine sand, but a big drop of oil smoothed it right out. That was the extent of the pre-shooting lubrication/maintenance I employed.

The lighting at the C.I. Shooting Sports range where I test fired the gun was a long way from what I’d get on a sunny day outdoors. To make matters worse, the poor illumination made the gray front sight kind of fuzz out against the same stainless steel gray of the rear notch for my almost 50-year-old eyeballs. So I used my handy red Sharpie to color the top half of the front sight blade red. I could have used a match and sooted the front sight blade, too.

The trigger pulled smoothly, although it stacks at the end. Like most guns could probably be tuned into something better by a skilled ‘smith. As you’d expect in a revolver, it’s a fairly long pull, and my big trigger finger tends to bump into my support hand when fired in my favored two-handed isosceles stance. Ladies or guys with girlie-sized hands probably won’t have that problem.

The revolver weighs in at 22+ ounces empty, twice the weight of a loaded Kel-Tec P3AT. That’s a few ounces lighter than a Ruger SP-101, so it’s not a complete boat anchor…more like a partial boat anchor, but that heft helps tame the recoil. As a long-time instructor, I’ve shot a few ultra-light snubnosed .38s. Some of the exotic featherweight metal guns feature recoil akin to corporal punishment of the hands.

I encountered zero malfunctions, which was exactly what I expected. I had a handful of shell cases hang-up a bit when lackadaisically plunging the ejector rod, but that’s a user-caused problem – I’ll take the blame there. Given how it’s not a full-length ejector rod (as on K-framed Smith & Wessons), that’s not unexpected. The primer strikes looked good, too, as they should.

If you have a problem with the gun, Taurus offers lifetime warranty on their modern production guns. While I needed no service with this little pistol, my sole experience with Taurus warranty service wasn’t auspicious. Let’s hope that recent rumors of improvement in that area are true. Or — better yet — you won’t need to find out.

For the money, this old-school snubby offers good value and should provide a lifetime of service unless you’re working it heavily. It’s a very affordable pocket gun that does what it’s supposed to do and does it well.

Aesthetics: * * * *
I think it looks pretty, but then again, I think Mila Kunis is hot, so take that for what it’s worth. Everything fits together nicely and it looks professionally manufactured. It’s certainly old-school and lacks some of the sexiness and features of some of the newer self-defense semi-autos.

Accuracy: * * *
The average end user is never going to use this wheelgun to poke holes at Olympic shooting competitions. For minute-of-bad guy, this gun gets it done. I suspect it will shoot tighter groups than I was able to achieve. Given the limited sight radius, long trigger pull, and a front sight blade that disappeared in the poor lighting where I shot, the Model 85 gives you the minute of bad guy deterrence you want in a snubby.

Ergonomics-Handling: * * * *
The rubber grip provides a comfortably solid hold on the handgun. It points naturally. It’s got some heft, but it’s not like the anchor my  Ruger SP-101 is. The long trigger pull trigger pull is smooth but stacks at the end. Large-handed shooters will have to adapt.

Ergonomics-Firing: * * * *
Better than average for a snubbie revolver. Its heft and the grips help attenuate perceived recoil. Your trigger finger will take the bulk of any punishment the 85 doles out. You won’t want to take it to a class where you’re shooting 250 rounds over a weekend, but for a 50-round trip to the range, the little Taurus handles about as tolerably as a revolver of this type can.

Customization: * * *
There’s no rail. There’s no adjustable grip panels, although you could probably swap out the grips (although I think you’d be a fool to do so unless you’ve got unique needs). The trigger could benefit from a fluff and buff by a gunsmith. Holsters, speed loaders, and gear are relatively easy to acquire as it’s the same size as the millions of S&W J-frames out there.

Overall: * * * *
The Taurus Model 85 provides good value for its low-$300s street price. For those on a budget needing a purse or pocket revolver (and who don’t mind the exposed hammer) it’s very viable option. You can spend more on a Smith or Ruger, but if you want to keep a few more dollars in your pocket, you can rely on the Model 85 to do what you need a pocket gun to do.