Anemic is generally the word that comes to mind when I think of “pocket guns” or sub-compact handguns. The guns that fall into that category are easy to carry —  that’s kind of the point — but the flavor of the day always seems to be .380 ACP or 9mm. What if I want something with a little more sauce on it? There is an answer. The “MORE POWER” crowd can have their cake and eat it too in the form of the .357 Magnum snubnose revolver.

The traditional players in the snubnose .357 Magnum revolver game are Smith & Wesson and Ruger, both building exceptional guns. The less traditional and generally cheaper option is Taurus. The Taurus 605 is the quintessential 5-shot, 2” barreled small frame snubnose revolver with a small grip, small sights, and a heavy trigger. Unlike most of its semi-auto counterparts though, it packs a wallop worthy of being featured in a title fight. The Taurus 605 comes in a fancy cardboard box with some Taurus artwork on it, and all the usual suspects (owner’s manual, etc.) in the box with the gun. As with all other Taurus firearms, it also includes two keys for the built-in locking mechanism located on the rear of the hammer. The rubber grip is not what I would call substantial, but it’s large enough to make the gun feel secure in the hand and does cover the backstrap, cushioning some of the blow when running hot loads.

The front sight is nicely serrated, but the sights in general are still small. Fortunately, there are laser grips available from Crimson Trace to supplement the iron sights if the user decides to go that route.

The trigger is typical of revolver double action triggers, long and heavy, but it is smooth and without any immediately noticeable hitches as it works through the mechanics of rotating the cylinder, retracting, and releasing the hammer. The 605 does have a spur hammer so that the gun can be run in single action, although the spur is abbreviated somewhat as compared to other revolvers and might be a little harder to actuate in a hurry. The single action trigger press is a little on the heavy side, but is crisp and breaks clean for those that might use it.

Out of the box, the gun locks up very tight on two cylinders, decently well on another two, and a little loose on the fifth cylinder. Not perfect, but close enough for Taurus apparently. Outside of that one issue, the fit and finish on the gun appeared to be good.

Weighing in at 24 ounces, the 605 is not a lightweight, and on the heavy side for dedicated pocket carry. It worked well in the Vertx pants I wear, but may not fare as well in a more traditional style of pant. Carried in a fleece The North Face jacket it noticeably weighed the pocket down, enough so that I wasn’t comfortable carrying the gun in a jacket because I felt it was too obvious. I settled on carrying the 605 in a hybrid leather and Kydex IWB holster where it disappeared under a single layer of clothing and was barely noticeable when carried all day. Even though the weight complicates pocket carry, every one of those 24 ounces was greatly appreciated when the gun is stoked with the rocket fueled .357 Magnums, so it is a tradeoff I thought worthwhile. Even though the gun is small, it shoots well and when loaded with .38 special is not what I would call punishing. It shot to point of aim at 25 yards with the loads I tested, Magtech .38 Special 158gr FMJ and Barnes .357 Magnum 140gr VOR-TX. To measure how accurately I could shoot the 605 compared to other guns I used a drill that I have shot in the past called the 300. It consist of 10 rounds shot freestyle, 10 rounds strong hand only and 10 rounds weak hand only from 25 yards at a B-8 replacement center target.

On my first attempt with the 605 I shot a 209. That score isn’t as high as what I can do with a full size pistol like a GLOCK, but is slightly better than what I have done with similarly sized pistols to the Taurus 605. Trying to press the long, heavy trigger well with my non-dominate hand hurt my score a little.

If I were more accustomed to working that heavy a trigger with my left hand, I think I could match my best score with this gun. Even though snubnose revolvers are often called “belly guns” or “get off me” guns, the reality of it is they are actually quite capable. I found the 605 to live up to that expectation, at least from an accuracy standpoint.

Where I found the gun to fall short is in the rapid application of multiple rounds on a target, in other words, trying to shoot multiple rounds quickly inside of 7 yards. With .38 Special, it was doable, but that isn’t the point of the 605. The point of the 605 is MORE POWER, which means .357 Magnum and that wasn’t quite so easy. Trying to tame the muzzle flip under recoil is a chore that requires spot on technique and considerable grip strength, I am not sure I meet either of those qualifications.

Even though I am a performance driven shooter and trying to get off 5 rounds of .357 Magnum in a hurry is a difficult thing to do, I loved shooting .357 Magnum through this gun. The over mold rubber grip cushioned the blow enough that it wasn’t excruciatingly painful, and there is nothing quite like feeling that much bang come out of such a small gun. It is like rooting for the underdog, it just feels right. 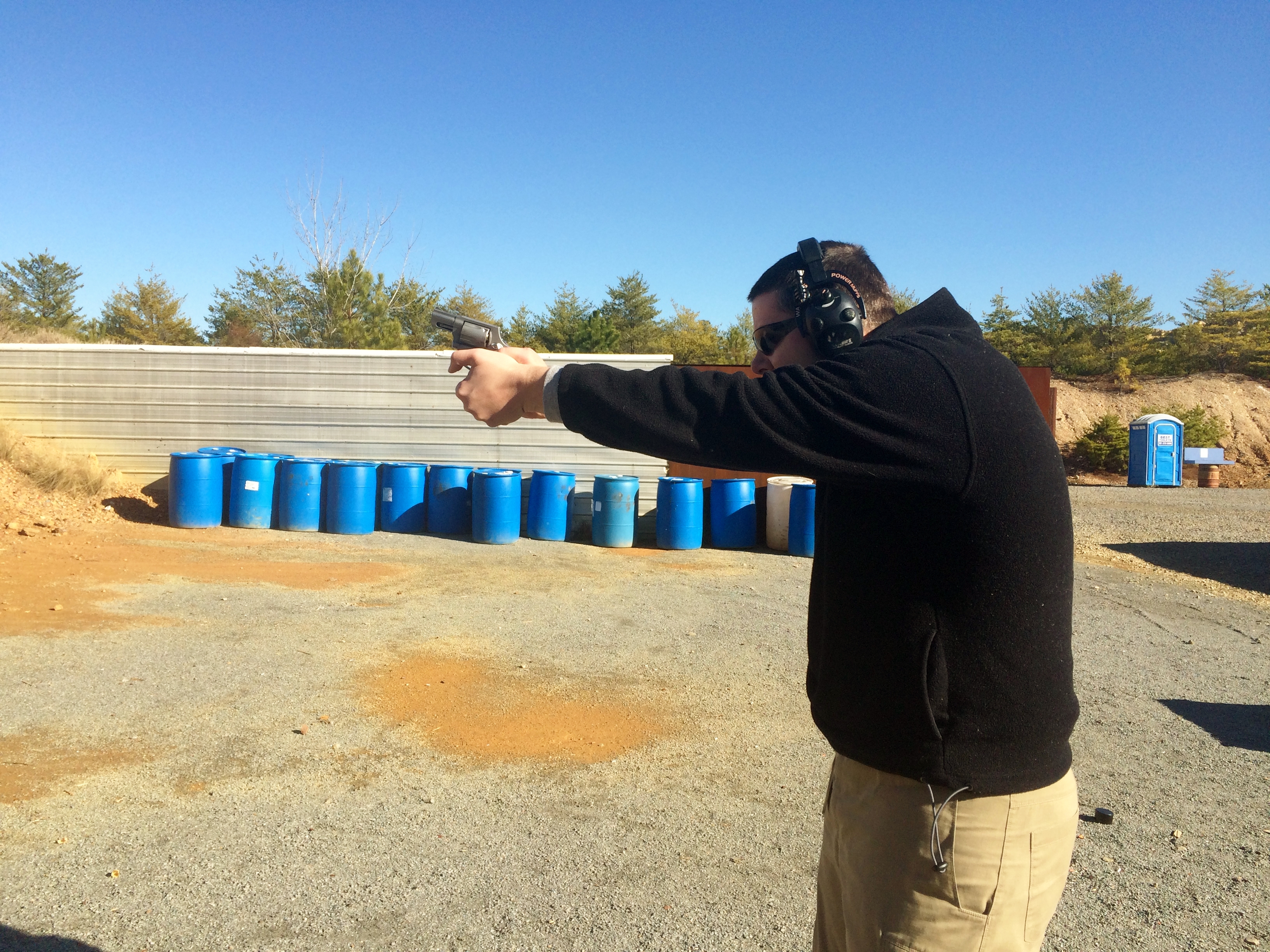 Overall, the gun performed better than I expected. I confess I am generally not a fan of Taurus, but so far they haven’t let me down on this one. In my opinion the gun shoots well, carries well in an IWB holster, and has been reliable. The MSRP is right at $500.00, but you can find these retailing for $350 or less all day long. For that price, I would say they are a worthwhile gamble if what you need is a mouse gun that roars like a lion.

Ergonomics (carry) * * * *
It’s a snubnose revolver, pretty easy to carry. I deduct one star for being a little heavy for pocket carry though.

Ergonomics (firing) * *
I am only grading with regard to shooting .357 Magnum. The recoil is vigorous, the shooter certainly feels it.

Reliability * * * *
The gun was perfectly reliable for the couple hundred rounds I have through it. If it makes it to 1,000 without an issue I will give it that fifth star.

Customize This * *
New grips is about all you get.

Overall * * *
I am conflicted here. The gun us a blast to shoot (pun intended), easy to carry, and this one at least is reliable. The flip side is the shooter has to be in beast mode to run this gun seriously. So I deduct two stars for being so hard to shoot well when loaded with .357 Mag.