Springfield Armory is embarking on a bit of a corporate re-branding. According to the gunmaker’s marketing mavens, their “Defend Your Legacy” slogan targets Americans between 25- and 45-years-old. Buyers who know their safety is their own responsibility. Who understand that the good guys have firearms because they’re the best tool for the job of self-defense. That all Americans have a historical right to keep and bear arms. Enter The SAINT.

No, not the Roger Moore series by the same name, famous for the actor’s arch dialogue, arched eyebrow, and Volvo P1800 coupe (which had fins, not arches). The SAINT is Springfield’s first AR-15. Following an expensive teaser ad campaign, the company finally unveiled their secret weapon at a media event in October. After putting some 700 rounds through two production examples, my first impressions were positive. But would alone time with the Springfield SAINT change my opinion? On the range and on the move, SAINT AR-15 balances nicely. The medium profile — straight, no grenade launcher cut — barrel isn’t a lightweight, but the BCM handguard is. Combine that with the full-auto-weight bolt carrier group, heavy buffer, and solid stock and the rifle swings and handles more nimbly than its 6 lbs., 11 oz total weight might suggest. The rifle feels less toy-like than many ARs, due in large part to some effort in reducing the typical rattle and slop and springy nature of the platform. As mentioned, the BCM stock is particularly solid — it doesn’t wiggle, it doesn’t flex and it doesn’t rattle like the standard M4 unit. The “Accu-Tite” receiver tensioning system eliminates play between upper and lower receivers, enhancing this solid feel further. BCM’s Mod 3 pistol grip offers a comfortable shape and a more vertical angle than the A2 unit, which most shooters will prefer. From the desert outside of Las Vegas to the snowy mountains of North Idaho, my SAINT(s) has run without a single hitch. A thousand rounds or so through it now with no cleaning or added lubrication, and it’s still feeding, firing and ejecting smoothly and with authority. No signs of weird wear or of slowing down. I’ve warmed-up to the trigger in this thing, too. My original opinion was solidly in the “meh” category, not quite sure if the extra effort of nickel boron plating and polishing the parts was worth it. Lipstick on a pig, if you will. But especially now that it’s broken in, and having shot it back-to-back with a couple of “Mil-Spec” jobs, getting rid of most of the grit, improving the smoothness of the reset, crisping up the break, and dropping the pull weight down a few pounds paid off. I can shoot this gun faster and more confidently than I can a parts kit trigger counterpart (parts kit graph here, and note the 10-lb vertical scale). The ~6.25-lb weight and the creep still demand solid concentration on the fundamentals when shooting for accuracy, though. When it comes down to it, only two parts on the SAINT leave me underwhelmed. The BCM PKMR M-LOK-compatible handguard is a lightweight plastic affair that doesn’t feel as hard as other polymer options and flexes a bit to willingly. But I repeatedly loaded up the bipod with even more forward pressure than usual and put significant weight on the sling, and was happy to see the KeyMod points shrug it off. Looks like the strip of steel molded into the KeyMod sections works as designed.

As you may remember from the initial “hands-on” article, at Springfield’s media event for the SAINT, Patrick from TFB and I both ran a lot of ammo through our rifles in only a few minutes — like 15 magazines worth — melting the front of our handguards.

Apparently dumping hundreds of rounds of ammo extremely rapidly will get an A2 gas block hot enough to melt this polymer. Heck, the guns were so hot that the gas tube was glowing cherry red and the finish was burned off the Mil-Spec A2 birdcage. The good news: a sane SAINT buyer will almost certainly never face this issue. It’s something I never would have done if Springfield hadn’t put a massive pile of loaded magazines in front of me and 14 other shooters and pointed us at 300+ targets in a race to shoot them first. If for some reason the handguard isn’t your cup of tea, however, Springfield has gone with a delta ring spring that can be compressed by hand — no special tool needed. It makes swapping out the handguard an extremely simple, fast (30 seconds), tool-less affair. I still don’t think it’s worth even that minimal effort, though, as the BCM unit is fine. It’s just that “fine” sticks out on what is otherwise an “exceeds expectations” rifle. As alluded to earlier, there’s one more part that might be a good fit on a different rifle but doesn’t befit the solid, quality nature of the SAINT: the rear sight. Taking an educated guess here, it appears to be an overseas-made Leapers/UTG unit. It’s passable, but the release button is gritty and sticky and the sight wobbles fore and aft when deployed.

With an A2 front sight base and a flat top upper, it clearly makes sense to include a rear sight so the rifle is usable right out of the box. Add a red-dot sight. I can’t fault Springfield for going with something on the affordable end of the spectrum, as mounting an optic is by far the preference of most shooters today and many don’t even bother zeroing their iron sights in the first place. With a mid-length gas system, M16 carrier, and heavy buffer, I figured the smooth-shooting SAINT might behave better than your typical direct impingement carbine when suppressed. Cue the Dead Air Sandman-Ti with 5.56 front cap for a few mags of testing.

Removing the A2 birdcage revealed a small mountain of carbon gunk caked to the muzzle. Having decided I’d remove at least most of it before threading on the suppressor, just on principal, it scraped off easily enough. Well, theory shot. The SAINT ran great, but was just as gassy and made what seemed like just as much ejection port noise as any other DI AR carbine. It pepped up in the accuracy department with the can on the end, though. I shot a bunch of groups — numb fingers be damned — without the suppressor on, then plopped down for a single group with it in place to see what happened. 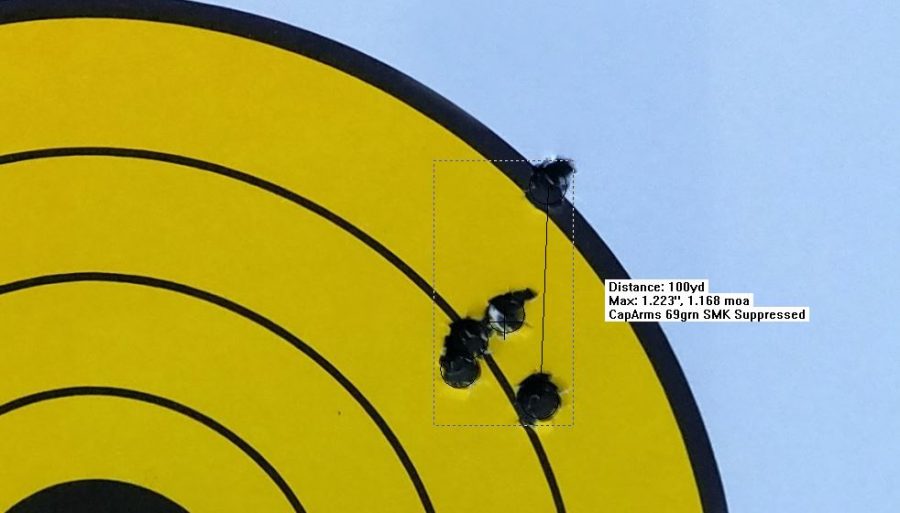 Okay, I should have shot a few more suppressed groups but now that we’ve committed to a move to Texas the cold is suddenly bothering me more. With the likely flyer included, the group above was 1.17 MOA and, just to satisfy my curiosity, taking that bad boy out nets a very tight, almost exactly half-MOA group. Which is tighter than expected from the SAINT, and it’s fair to say that the Sandman helped the cause. Point of impact did shift down by about six inches, and to the right by a couple inches. With the A2 birdcage installed, the SAINT shot a 1.77 MOA group from 40-grain Winchester Varmint X. Although I know it to be very consistently-loaded ammo, the SAINT didn’t love the Gorilla Ammo 77 grain Sierra Match King load and shot a 2.62 MOA, 5-shot group. At this point, however, I’m thinking the obvious vertical stringing in most of my groups may be due to the sub-freezing weather. I attempted to warm up the barrel before starting each group and shot them all at a fairly even pace, but I may well be revisiting the SAINT’s accuracy potential at a later date on a warmer day. And the Springer’s favorite load of the day was the 69-grain Sierra Match King offering from CapArms, which turned in a 1.46 MOA group. This is all pretty consistent with results I’ve seen recently from other testers, so it would seem the SAINT is reliably a 1.5 to 2 MOA rifle. Which meets or exceeds the ~2 MOA goal most folks expect from a “patrol” sort of AR carbine. Just in case your “eye ruler” is questioning the measurements seen above, by the way, note that the bullseye on these targets is 0.75″ across rather than an inch.

Overall, the SAINT is a smooth-shooting AR-15 packed with value for its $899 MSRP. Its parts quality, fit, finish, and assembly compare favorably (or better) to more expensive industry standards. If it should be staked, it’s staked well, if it should be inspected or shot peened, it has been, if it should be a certain grade of steel or aluminum, it is. The only real deviations from “Mil-Spec” are a Melonited CMV, 1:8” twist barrel and its mid-length gas system, the first of which is a big plus in my book for accuracy, longevity, and corrosion resistance. Moving the gas block from carbine-length to mid-length might make the rifle marginally smoother, but the biggest advantage is probably a longer handguard. 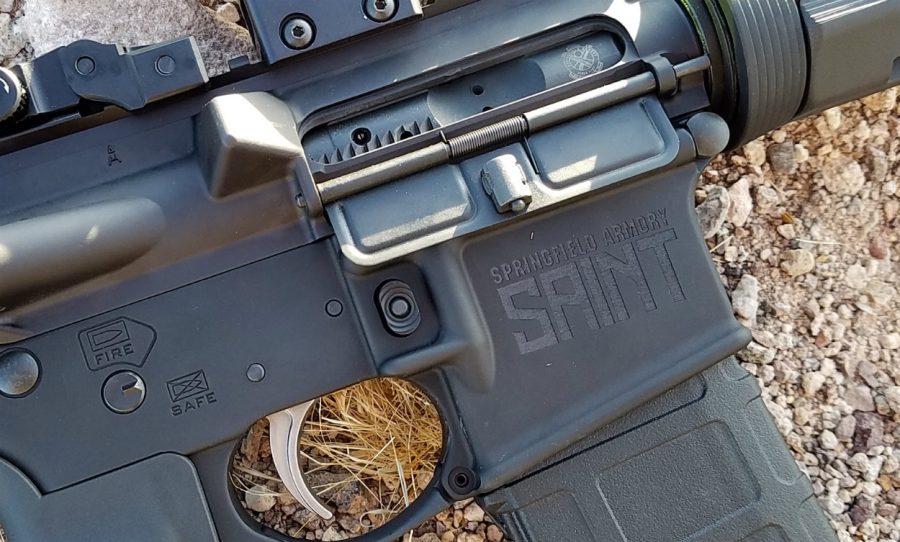 While there are some options from a couple other big name brands at up to $160 less and plenty at much higher prices, the SAINT is a better value. Better components – barrel, trigger, BCG – better furniture (the stock, grip, and trigger guard are great, and I’d still take the handguard over the GI-style polymer one found on most comparable rifles), and better assembly. Reliability is fantastic, and accuracy slightly beats par for the course. It’s a lot of gun for the money, and it’s ready to rock right out of the box.

I now have about a thousand rounds through the SAINT – some of those suppressed — with no cleaning and it’s still running smooth and strong. Not a single stoppage or hitch of any sort. I’ve seen a couple dozen other SAINTs also run flawlessly (outside of a couple dud primers) through hundreds and hundreds of rounds, and I’m confident in it.

Five stars outside of the handguard and the rear sight. Materials and finish choices plus the care in assembly nail the quality category otherwise. This is a rifle that will go the long haul and hold up to demanding use such as competitions and training courses.

The SAINT rifle represents a very strong value for the money from a major manufacturer. It’s a rare AR in this price range that the vast majority of purchasers won’t feel the need to change a thing on. This is one of the few. Basically nothing in or on it needs to be upgraded. It’s high quality at a medium price.

I like the market niche the SAINT has slotted itself into, basically achieving that nothing-needs-to-be-upgraded level of quality and furniture at an extremely good price. I wouldn’t hesitate to recommend this rifle to a first-time buyer or to anyone else looking for a reliable, high-quality AR-15 rifle that doesn’t need to be messed with.

Ruger’s New AR-556 MPR Multi-Purpose Rifle: One Rifle To Do It All?