I carry a 1911 in .45ACP every day. I’ve carried a .45ACP as my daily carry for decades now. I’m invested in the caliber. The key to my ballistic heart: 1911’s incredible pointability. With a good 1911, I can draw and dump a magazine into a 4″ circle at seven yards in a few seconds time. What made me fall in love with the platform is made all the lovelier when it’s chambered in 9mm . . . My first reaction was the same as when I got my first XD, many years ago — good job with the packaging and the gear. The case came with everything you need to walk out the door and shoot, minus the ammo: the gun, two mags, magazine holder and holster, and spare inserts for the fiber optic front sight.

I wish everyone selling a gun did this, or at least had this kind of package as an option. Any time you buy a handgun you should have a holster and a way to carry a spare magazine. The only other thing they might have included is a non-marring 1911 take down tool; the Range Officer is particularly hard to take down without one. The Range Officer doesn’t stray far from the classic 1911 shape and form. The T&E gun arrived in rail-less stainless steel with a satin finish. There are no rough edges, nothing sharp to catch or snag. There’s also no blending of the lines, and no high polish anywhere. The back of the gun sports a flat mainspring housing that’s nicely checkered with the front strap left smooth (not my preference).

The thumb safety is single-sided, but large and well textured. Some may find it a little too well textured, but for me, it provided a positive grip and rest for my strong hand thumb during firing. The thumb safety engages and disengages with a strong snap. It operated with almost unconscious effort when I pressed the gun forward during the draw.

The Springfield Range Officer has a moderate extended beavertail safety with the now standard memory bump. There are no forward slide serrations and the scales are a checkered cocobolo bearing the Springfield logo and double diamonds. It sports the traditional bushing on a fully supported barrel. That bushing is pretty tight, especially for a gun of this price range. In fact, the lockup of the gun and general fitment were better than expected on what I would consider a low cost 1911. Immediately after taking the Range Officer out of the box and checking to make sure it was empty, I had my first cause for concern. Pulling back on the slide and inspecting the chamber without a magazine in the gun proved that the gun was clear. When I released the slide, the slide did not fully return to battery. A light tap on the back of the slide fixed the problem, but it was easily repeatable. 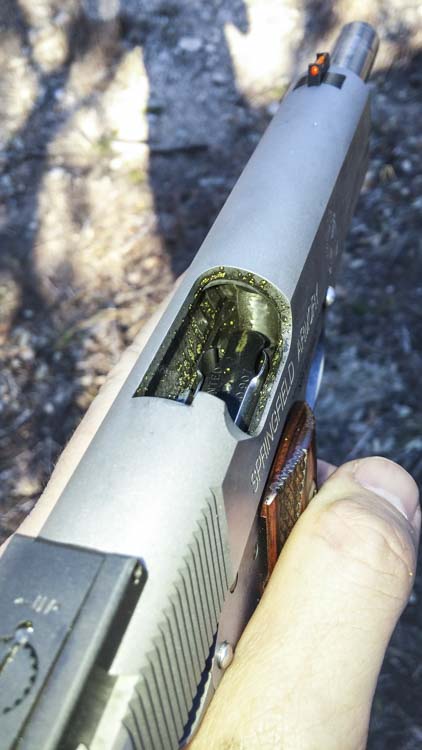 I chalked this up to a lack of lubricant and broke out my go-to can of RemOil. The problem persisted, but now returned to battery with only a forward shake of the gun. With that, to the range!

On my daily carry gun, I insist on Heine SlantPro Straight Eight night sights; the likelihood of having to use the firearm in the dark is greater than having to use it in the light. But for range, hunting, or competition use, a fiber optic front sight is the way to go. I was happy to see the Range Officer sported a red (green also included in the box) fiber optic front sight and a fully adjustable flat black target-style rear sight. 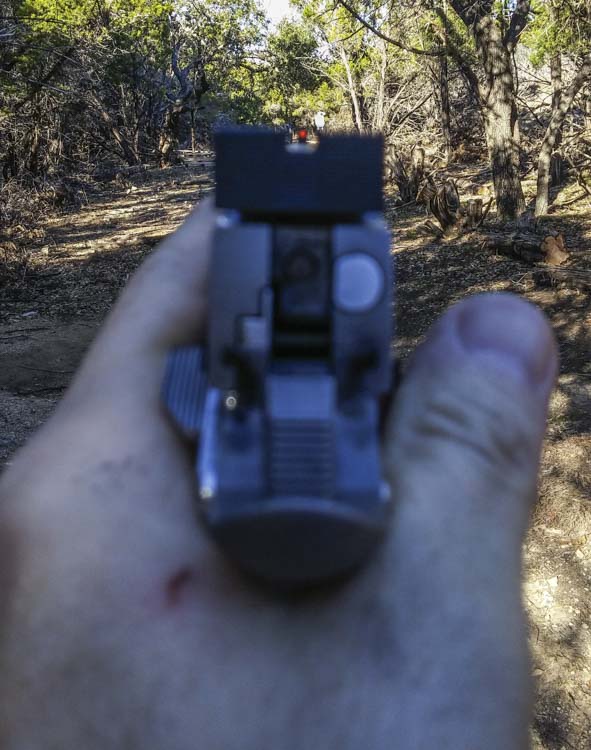 The first pull of the long aluminum trigger was a little stiffer than I would have liked, but it broke cleanly. Slightly heavy, but with no creep and a crisp break. That persisted through the 550+ rounds I ran through the gun.

As I’d expected, the gun is fun and easy to shoot. After a few mags of slow fire, I got to shooting faster, which is the point of a 1911 in 9X19. At least it is for me. And I wasn’t disappointed.

Although it didn’t drive quite as fast as the STI Tactical DS in 9mm (at twice the MSRP) I shot last year, it was still throwing lead downrange almost as fast as I could pull the trigger. The gun was certainly waiting for me. I wasn’t waiting for the sights to set back on target. With locked wrists and a firm grip, that muzzle barely rises. It feels less like recoil and more like the pistol just shakes in your hand bit. I’d recommend the 9mm Range Officer for a new shooter on the minimal recoil alone.

It should be noted here that although the round may be lighter, the gun itself isn’t. Like most 1911s in 9X19, it’s heavier than its .45ACP counterpart. More weight and less charge equals a lot less recoil from any position.

One-handed with my strong hand only, the gun was still very easy to control, and delivered excellent results when shooting from non-standard positions. I always try shooting from my back, both forward and across my body. I also try shooting while crawling (try it and despair, it’s shockingly difficult), as well as from an incomplete draw with the handle planted in my ribs. The mild recoil and full 5″ slide made follow up shots from these various positions much easier.

I shot the gun with the CEO of Underground Tactical. Jason Carter isn’t much of a 1911 guy; none of them fire a significant enough projectile for his uses. He’s an extremely accomplished handgun hunter and the only guy I’ve ever met who’s taken a Cape Buffalo with a double action revolver.

Carter and I both had the same issues with this gun. For the first 300 rounds or so, the gun repeatedly wouldn’t go fully into battery on a new magazine, either by releasing the slide lock or pulling back and releasing the slide itself. I wiped it clean and relubed the gun several times during the process of firing.

I experienced this with all three rounds I tried, the ubiquitous Winchester white box FMJ, Team Never Quit’s Frangible Training rounds, and my preferred carry load, the Winchester Defender 124gr +P. The slide would come 95 percent closed, but had to be pushed that one little bit with the thumb to completely close.

The problem was predictable through 300 rounds, intermittent by #350, and gone by the 400th. The last 154 fired without any malfunction at all. I call that growing pains. Other than that, there were no malfunctions of the gun. Neither Carter nor I shot the Springfield Range Officer particularly accurately. My 25 yard seated groups off a bag where anywhere from 4 to 6 inches. I felt like the gun could do better. I pulled the slide from the gun and blasted the junk out with an air compressor, then lubed it back up, BoreSnaked it, and put it back together to shoot another day.

My final day ended with acceptable results. The gun is accurate . . . enough. Team Never Quit Frangible Training ammo gave me the best results: regular 3″ groups. I was making 50-yard one-handed shots with that ammo while standing at a 19″ silhouette target with relative ease. The Winchester white box 115gr FMJ’s shot anywhere from 3 1/4 inches to 4 inches. The disappointment came with the defensive round, the Winchester Defender 124gr +P, which scored groups in the 6″ range. 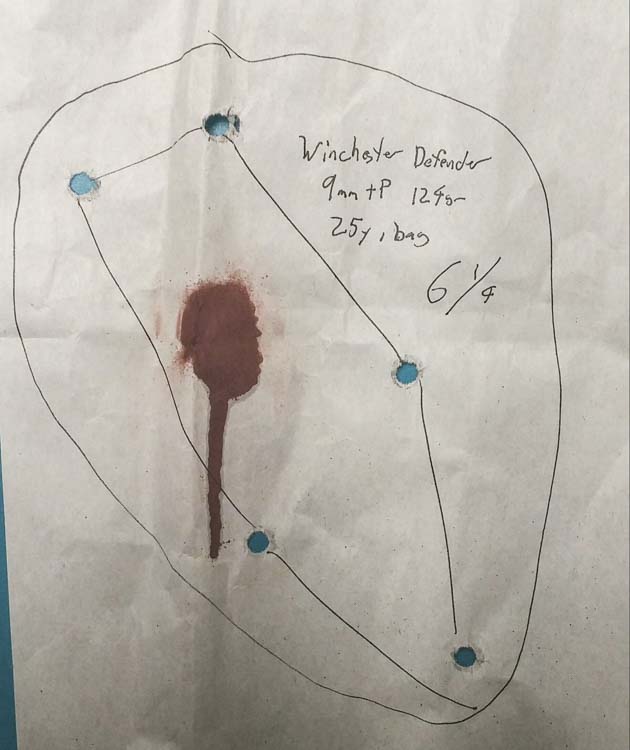 Given the gun’s minimal recoil and the wide disparity in performance based on ammunition, I can’t help but think there is a self defense round that will perform better out of this gun than what I had on hand. Those 3-inch groups are perfectly acceptable. The six-inchers are no fun at all.

Best of all, the 9mm cartridge in a government-sized steel frame 1911 made shooting fast seem like cheating. Two-handed, there’s not much muzzle rise. With a support hand wrist-locked, these guns pour rounds on the target. Anything I can do in .45ACP, I can do even faster in 9mm. For one handed fire, using my strong hand only, the difference between the two calibers in the same platform becomes even more pronounced.

For newbies or budget conscious 1911 buyers, the Springfield Range Officer is a welcome addition to the line.

Ergonomics * * * *
Everything in its place. I’d have liked the trigger undercut just a little more and the front strap checkered, but in 9X19 the recoil is so mild you don’t really need it.

Appearance * * * *
No fancy finish, but no rough edges either. Good wood on the handles, a modest script on the slide. For a budget 1911, this one was done well.

Accuracy * * * *
Three to four-inch groups off a bag at 25 yards is just fine. I’ve shot 1911s that shoot a quarter of that at six times the cost. What’s impressive about this gun: the speed at which you can achieve that kind of accuracy. One-handed shots at the 50 yard line ringing steel every second will get you some attention on the range.

Reliability * * * *
If I rated this on the first 300 rounds, reliability would have been a two. After a modest and completely acceptable break-in period, the gun performed flawlessly with all ammunition types.

Overall * * * *
This is a great gun, a solid shooter, and much better than I would have thought for the money. It won’t replace my EDC, but it would make an outstanding beginner’s 1911, as well as a great base gun to start your own custom 1911 in 9X19.